The major in Political Science and International Studies is designed to provide an understanding of political systems in general and of the American government, European affairs, and international relations in particular.

This major provides intellectual and practical preparation for public service, diplomacy, and journalism, and serves as a preparation for law studies and other graduate-level pursuits. Small classes permit students to hone their information literacy, research methods, and communication skills. McDaniel’s Budapest campus exposes students to a host of different cultures and international institutions, while its campus in Maryland provides a platform for work in Washington, D.C

The College gives you a general knowledge of many things, more than what you thought you would study. 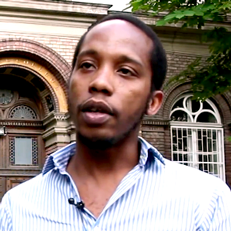 Credits: 4 Social, Cultural, and Historical Understanding.
A survey of political systems with an emphasis on theoretical principles of government and the citizen's relationship to the state. The course will also examine the methodology of the discipline of political science, including various aspects of the political and governmental process.

Credits: 4 Social, Cultural, and Historical Understanding.
A survey of classical political thought from the ancient Greeks through the medieval period. The course will emphasize the concepts of natural law, Roman law, church-state relations, and other topics relating to the political ideas of the period.

Credits: 4 Social, Cultural, and Historical Understanding.
An overview of political thought from the Enlightenment to the present with particular focus on the origin, nature, function, structure, and organization of the state and its relation to the citizens governed by it. The course explores the justification of governmental authority and the scope of governmental rights to interfere with individual lives and discusses the utility of political philosophy for contemporary life.

Credits: 4 Social, Cultural, and Historical Understanding.
A comprehensive survey of state, county, and urban politics and administration with emphasis on the evolving federal relationship, the development of strong governors, and the emergence of professional state legislatures. Special attention is given to Maryland problems, prospects, policy dynamics and the environment as well as to the politics of public education.

Credits: 4
An introduction to the major theories and approaches for analyzing global developments, studying the structure and organization of the international system, examining the various actors shaping world politics, exploring causes of conflicts and means for conflict resolution, and reflecting on the future of international relations and the role of individuals in the world community.

Credits: 4 Social, Cultural, and Historical Understanding.
This is a one-semester course encompassing all essential features of European integration and the existing European Union. (Budapest Campus only.)

Credits: 4
An overview of American political thought from the colonial period to the end of the twentieth century. Main topics include the origins of American democracy, the debate over the constitution, the expansion of individual rights, the problems associated with industrialization, and contemporary American liberalism and conservatism. The course is taught on the Budapest campus and is specifically designed to acquaint non-American students with the development of the political culture that underlies modern American democracy.

Credits: 4
An examination of the major theoretical, conceptual, and practical issues in the study of public policy and the policy process, with examples drawn from current issues in American policy. These may include education, civil liberties, political economy, environmental policy, welfare, and energy.

Credits: 4 International Western.
A comparative methodological analysis of the Western European governments of the United Kingdom, France, and Germany with an emphasis on systems analysis, political culture, structural-functionalism, and elite analysis. All three polities are members of the European Union which is also analyzed with relation to the regional integration of Europe.

Credits: 4
An investigation of the history, institutions, and decision-making processes that shape environmental policy in the United States. The course will emphasize the roles of and relationship between local, state, and federal governments as well as industry, science, and public opinion in environmental management and protection.

Credits: 4 Prerequisites ECO 2201 or permission of the instructor.
An examination of the development of American election campaigns from party-based to candidate-centered and media-oriented. The course features in-depth coverage of the role of public opinion polling and its various strategic and tactical uses in campaign politics. Among the topics related to survey research will be sampling, question wording, questionnaire design, and analysis of the results.

Credits: 4
Supervised field experiences in appropriate settings, usually off-campus, designed to assist students in acquiring and using skills and knowledge of the discipline unique to the selected topic.

Credits: 4
An overview over U.S. foreign policy from the Second World War to present. The primary objective is to acquire a general understanding of the main ideas, events, and strategies that have shaped U.S. foreign policy over the past half-century. Topics discussed include containment, deterrence, the nuclear arms race, humanitarian intervention and the use of force, economic assistance and trade, and a number of regional and thematic issues.

Credits: 4 Social, Cultural, and Historical Understanding.
Introduction to the study of the principles of constitutional law as related to the changing political, social, economic and environmental problems of the United States; the role of the Supreme Court in the political process.

Credits: 4 International Non-western.
An examination of the political, social, environmental policy, and economic problems of "third world" development with Latin America as the regional area of focus. The models of corporatism, bureaucratic-authoritarianism, civil-military relations, and dependency theory are applied to case studies in Argentina, Brazil, Cuba, and Peru. An examination of the role of women in development as well as the impact of development on the environment is also included. Sustainable development models are offered as an alternative to the failed attempts at development.

Credits: 4 International Non-western.
A comparative exploration of the historical, cultural, social, political, and economic similarities and differences in the systems of the Former Soviet Union and The People' s Republic of China. Both systems attempted to implement Marxism in their systems. The failure of Marxism in the Former Soviet Union and the revisions of the application of the Marxist model in China are explored. Theoretical paradigms that attempt to predict the future of these regimes are also analyzed.

Credits: 4 Social, Cultural, and Historical Understanding.
A study of the First Amendment and the Fourth Estate with an emphasis on the major Supreme Court decisions on freedom of speech, press, environmental policy, communication law, assembly, and the law of mass media. This course involves students in classroom simulations and visits to courts.

Credits: 4 International Non-western.
This course is designed to expose students to the multifaceted nature of conflict on the inter and intra state levels, historically, and in the current post Cold War period. This objective will be achieved by exploring the sources, causes, environmental impact, and determinants of conflict, presenting the various perspectives on the genesis and the amelioration of conflict, and utilizing some case method analysis to demonstrate the life cycles of some specific conflicts and the management or resolution thereof. The cases vary each semester but have included the following: The Middle East Conflict, the Anglo-Irish Conflict, the Gulf War (and now the second war against Iraq), the war on terrorism, and the conflict in former Yugoslavia and Rwanda. The course also covers the spread of radical fundamentalist Islam as a source of conflict in the Post Cold War World and specifically with regard to the "War on Terror."

Credits: 4 Prerequisites
An analysis of various topical or recurring problems in the area of either domestic or international politics. This course serves as a focal point for an integration of methodology, theory, and substantive problem areas.