Yemen is the largest humanitarian crisis in the world – and children are dying and being robbed of their futures. 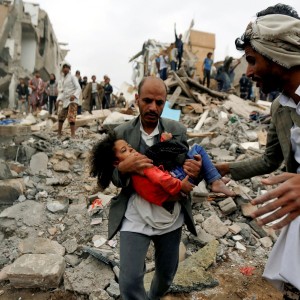 Photo published by Guardian in an article.

Yemen is one of the worst humanitarian crises in the past 100 years, with more than 24 million people (which is almost 80 percent of the population) in need of humanitarian assistance, including more than 12 million children. Ever since the conflict started in March 2015, the country has become a living hell for the children. With Covid-19 now spreading rapidly, Yemen is facing an emergency within an emergency. Sanitation and clean water are in short supply. Only half of health facilities are functioning, and many that are still functional lack basic equipment like masks and gloves, let alone oxygen and other essential supplies to treat Coronavirus. Many health workers are not receiving salaries or compensation.

But for some reason the screams and cries for help are not being heard. According to UNICEF around two million children under five years of age are suffering from acute malnutrition and are in need of treatment. The damage and the schools and hospitals closing has stopped access to education and health services. Before Covid-19, two million children were not attending school. Now, because of the pandemic, schools have been closed around the country, an additional five million children are not going to school. The voices of these children are not being heard enough and it seems to be that anything happens in the western world and to western citizens gets more media attention. Yes, what has been happening in the U.S. with the BLM (Black Lives Matter) protests and LGBTQ rights battles with the Trump administration, is very important. But in perspective a country with 28 million people facing extinction is a much bigger emergency and it needs more attention.

“Famine is imminent. It could happen any time… People have sold all their belongings and they have nothing more to sell in order to get food,” says Ibrahim Alwazir, Oxfam Communications Coordinator in Yemen to the Oxfam website.

It seems like that this issue is being ignored in the western world, specifically in the U.S. media, because the U.S. is an ally of Saudi Arabia. The Saudi Coalition has caused more turmoil and has killed civilians, who were not directly involved in the political games. This is a coalition that received logistical and intelligence support from the U.S., U.K., and France. So, no media coverage, no billionaires coming together to provide aid. No pro-lifers standing their ground for them. What’s a few bodies amongst foundations, right? 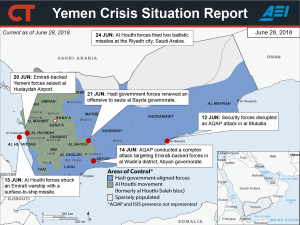 The conflict has its roots in the failure of a political transition supposed to bring stability to Yemen, following an Arab Spring uprising that forced its longtime authoritarian president, Ali Abdullah Saleh, to hand over power to his deputy, Abdrabbuh Mansour Hadi, in 2011. As president, Mr. Hadi struggled to deal with a variety of problems, including attacks by jihadists, a separatist movement in the south, the continuing loyalty of security personnel to Saleh, as well as corruption, unemployment and food insecurity. The country now is also a proxy war and civil war area between ‘Houthi Rebels’ supported by Iran and the Hadi government by Saudi Arabia.

The Houthi movement (known formally as Ansar Allah), which is Yemen’s Zaidi Shia Muslim minority, fought a series of rebellions against Saleh during the previous decade, took advantage of the new president’s weakness by taking control of their northern heartland of Saada province and neighboring areas. Disillusioned with the transition, many ordinary Yemenis – including Sunnis – supported the Houthis, and in late 2014 and early 2015 the rebels gradually took over the capital Sanaa, forcing president Hadi to flee abroad in March 2015. Alarmed by the rise of the group, Saudi Arabia and eight other mostly Sunni Arab states began an airstrike campaign aimed at defeating the Houthis, ending Iranian influence in Yemen and restoring Mr. Hadi’s government. The coalition received logistical and intelligence support from the U.S., U.K., and France.

The charity Save the Children estimated that 85,000 children with severe acute malnutrition might have died between April 2015 and October 2018. In addition to the severe human cost, Yemen is also strategically important because it sits on a strait linking the Red Sea to the Gulf of Aden, through which much of the world’s oil shipments pass. So, it’s not very good business to bring attention to this issue, after all money is the new God, isn’t it?