Video projects of students of Holocaust and Memory course In Budapest

What are the similarties of a house only few blocks from the College on Rakoczi ut and the Shoe Monument on the Bank of the Danube close to the Chain Bridge? Both feature in the films of McDaniel students video projects on the Holocaust in Budapest. 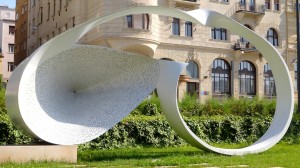 The course Holocaust and Memory given by Professor Andrea Peto aims to explain how the Holocaust happened with a particular focus on Hungary, how “ordinary men” became ruthless killers and how everybody else let it go on, remains one of the most perplexing issues of the twentieth century, if not all of history. The frame of the discussion will be an overview of history of Nazism in Europe and in Hungary and consideration of such issues as the problems of doing Holocaust history, representations of the Holocaust, and Holocaust memory. The course also aims to interrogate the emerging field created by the intersection of Jewish Studies and memory to study the literary and artistic representation of the Holocaust. The course includes a video film project of the students when they connect readings and the topography of Holocaust in Budapest. The course uses innovative instruction methods such as the course Facebook group where all assignments are uploaded and readings and additional material are uploaded. The messaging function and the open instruction space makes the communication open and multidirectional after class hours. 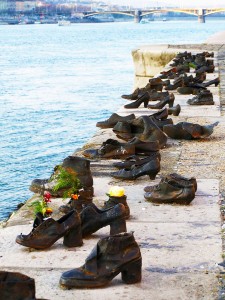 The students are doing a video project for the class where they demonstrate not only technical skills but also digital story telling. The projects are covering controversial memory places like the Shoe monument commemorating the killings committed by Hungarian on the bank of Danube, the House of Eva Weinman who was as old as Anna Frank and also wrote a diary about how to survive the Holocaust in Hungary, the monuments and counter monument on Liberty square,and the Holocaust Documentation Center. As a learning outcome of the class student are confident professionals narrating the troubled history of the Holocaust in Hungary. In our troubled worlds that is a good start to make a change.