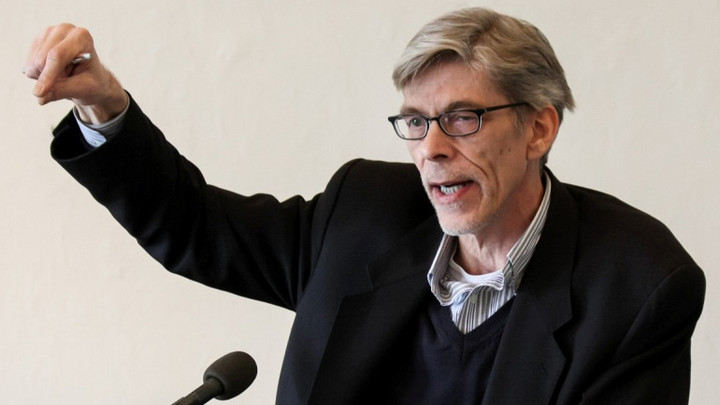 Dr. Jochen Fried, Director of Education at the Salzburg Global Seminar, came to McDaniel College last week to speak on the topic of the ‘unpacking global citizen’ in our society today. The lecture was quite attention grabbing and though provoking as we took a look at the way the globalized world will progress, or digress, in coming years.

Dr. Fried began the lecture by asking the question, “How would you describe what the world will be like in 30 years’ time, to a ten year old child?”

A pretty hard-hitting question, the different replies included topics such as population, technology, basic human rights, etc. I personally thought it would be best to explain to a ten year old, that although there is social strife in the world, things are slowly and steadily improving, and in thirty years, we can hope that humans around the world will be treated slightly better than they are now.

Fried’s main point in the lecture came to be about environmentalism and the state of our planet – and the state that it will be in just a few decades. He also touched on human rights and on the position of those who are below the poverty line and less privileged than those of us who are fortunate enough to attend university in a thriving European city. Fried stressed the importance of us, as individuals becoming involved in the well-being of our planet. He used the example of smoking – we know we shouldn’t smoke, because it’s not good for our health, but we do it anyway. He spoke about mobile phones and the metal components that are needed for their function – materials that are present in some impoverished African countries – materials that cause wars in such countries. If we act as a consumer in the mobile phone market, are we funding a war on a distant shore? If we buy a certain brand of clothes imported from Taiwan, are we funding the exploitation of sweat shop workers?

One concept of the lecture that really struck a chord with me was the ‘rule of 150’. Fried stated that each person has roughly 150 people on their social media outlet, such as Facebook, who would seriously listen and considerer something you posted if it were of importance to you. If you were able to influence 150 people to make serious changes and become involved in global betterment, this progression will create a domino effect that will work to influence an even larger amount of people.

Dr. Fried really pushed and expressed the importance of taking action, as it is our generation that will influence the way the world functions in the next few decades. It will be a time of the utmost importance, and the way he explained it, the entire subject was actually quite daunting. It is up to us to improve the quality of the earth and of the humans who inhabit it, not just in the western world, but all around the world.