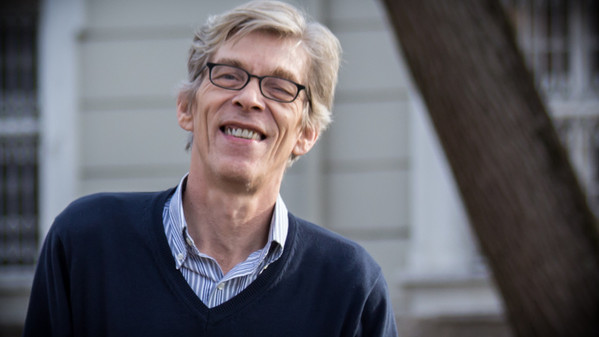 McDaniel students shared pizza with dr. Jochen Fried who is the Director of Education at the Salzburg Global Seminar and who came to share his pros and cons about the idea of citizens without borders, on Wednesday, May 13th.

Doctor Fried is an old friend of McDaniel’s dean, dr. Frenyo Laszlo. This was one of the reasons students automatically liked him. He is a German living in Vienna, Austria, who has not used a mobile phone for over four years and does not drive a car. He is very tall and formally dressed, and started his lecture with a brain-game, as he called it, he made us think of how we would explain how the world would look like in 30 years for a ten year-old kid. This exercise got students’ attention and everybody present in the room started to think about it. After few minutes, the discussion started, to be followed with a presentation that dr. Fried prepared for us.

As the topic was globalization, the issues discussed varied from precise to broad and from known to unknown. He said that globalization does not take place only on the business and economical level; it is also about people and their interconnectedness. Individuals are neighbors on global level and their interactions and connections, their influence upon each other develop new values and new trends that the globe stands on. Dr. Fried also mentioned that the accident of birth is not relevant anymore, one’s place of birth is no longer one’s place of destiny; changes are made and they are made very rapidly.

The focus of the lecture was more of the injustices and inequalities that exist in the world today. He was emphasizing the role we, human beings, who form the population of the Planet, play in today’s events. To make us understand better and visualize the picture, he had some maps which showed the land areas of the planet compared with where the masses of population can be found; maps of the population growth in countries compared with decline of population; maps where the wealth can be found compared with the map of countries where people live with less than 1$/day. His strategy of making us understand inequalities and how things are shared on the globe was by using these maps that were contradictory, first being the positive image with a following one showing the opposite event.

Furthermore, the professor told us the shocking statistics of 1% of the world population holds 48% of the wealth in the world. Moreover, 20% of the top population of the world holds the 94,5% of the wealth, which leaves 80% of the other population in charge of 5% of the wealth. This is shocking and completely unequal, unjust and unfair. He repeated couple of times the point that we have to start acting accordingly and start to share equally; but everybody has their own interests in different fields, and globalization is the reason of world’s exploitation of some and freedom of others.

All in all, the lecture was a success, students learnt and left with a full stomach of pizza and new inspirations and with not so much caffeine though. ”Knowing and acting connection” is the connection we and our generation has to start understanding, because globalization it is not his and dr. Frenyo’s generation issue was the end note of the lecture.