Uncovering a Hungarian gem at the János Thorma exhibition in Budapest

János Thorma’s “The painter of the Hungarian Barbizon” exhibition is running until May 12 and is definitely worth seeing! The exhibition in the Hungarian National Gallery  (Buda Palace, Szent György tér 2) is the biggest presentation of Thorma’s oeuvre to date.

It marks the 75th anniversary of János Thorma’s death as well as hundreds of paintings this Hungarian Barbizon painted in his life. Most of his work is unfamiliar to the public, as well as to the artists of our times, which provides another reason to celebrate this great artist.

His work is different than the work of his contemporaries. What strikes you first is that the people in his paintings often do not have a particular facial expression. Thorma evidently prefers to, if there are a number of characters in the painting, to give “personality” to only some of them. Assuming that giving life to certain characters embodies their importance to the artist himself and to the moment the painting was dedicated. His vivid colors draw our attention and help us connect to Thorma’s world easier. 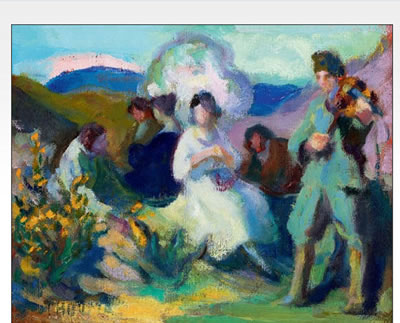 Thorma was one of the founders of the Nagybánya school of painters that achieved fame world wide in 1896 and  respected professor of many outstanding artists of modern Hungarian painting, still it has been a long time since the last exhibition of his works was held in Budapest.

Thorma reached recognition as a young painter not only in Hungary but in Paris and Munich as well. His work is usually based on historical events, although he reached his full potential during the Nagybánya period when he painted colorful landscapes with a lot of light and life.

The show represents a unified effort of several public institutions and private collectors such as the Art Museum in Nagybánya, the Janus Pannonius Museum in Pécs, the Móra Ferenc Museum in Szeged, the Déri Museum in Debrecen, the Herman Ottó Museum in Miskolc, the Katona József Museum in Kecskemét and the Thorma János Museum in Kiskunhalas, as well as Hungarian, German and Romanian private collectors (“Hungarian National Gallery”, Büki Barbara).

Sadly, people don’t know enough about János Thorma, and that he is one of the leading painters of the 20th century. His paintings, as well as drawings, traveled around the Europe and were part of many exhibitions but were rarely seen at solo exhibitions of the painter. This is a unique opportunity to explore Thorma’s art and the huge collection that has been brought to the Hungarian National Gallery. It is an opportunity to see the world through the eyes of a great painter and to stroll down the plains that he drew so many times.