The first and second U.S. presidential debates between then Republican nominee Donald Trump and Democrat nominee Hillary Clinton in late September and early October of last year raised a lot of questions about mainstream media and moderators’ objectivity. These issues, including the number of questions asked, the number of interruptions by the moderators, the visual coverage of the two candidates, and the level of objectivity of the moderators, will be discussed in this article.

During the first debate, each candidate received six questions but Trump got 15 exclusive questions. Questions on Trump forced him to answer defensive, but the questions for Hillary were all easy softball questions without any follow ups. Trump was interrupted by the moderator (Lester Holt) 41 times while Clinton was interrupted just seven times.   The most controversial part of the debate was about the moderator’s false insistence that Trump allegedly supported the war in Iraq. The moderator, who was supposed to be unbiased, rather than ask Hillary why she voted to authorize the war when she had access to much more information than Trump did, tried to accuse Trump for support of the war, something which wasn’t true. Trump continuously denied the moderator’s claim. Immediately after the debate, the fact-checkers could have access to the recorded video from January 28th 2003, which is proof that Trump not only wasn’t a supporter of the war, but he insisted on importance of the economy rather than a war. (1)

The main issue in this regard is the fact that even if Trump had been a supporter of the war, as an ordinary or private citizen he wasn’t in a position to make a decision about it, while Hilary Clinton as a senator who voted for the war, should have been questioned as a decision maker whose policy support led the United Stated into invasion of Iraq in 2003. The political position of Trump and Clinton at that time is out of question, therefore going after Trump’s opinion about the war, seems to be absolutely unfair and biased.

In the second debate, visual techniques which were utilized to influence and or alter the observers’ opinion were the prominent aspect of the debate. As is visible in the pictures and the video of the debate, due to camera adjustments, Donald Trump, who is a 1.92 cm man, looks like a little school boy in comparison to the 1.65 cm Hillary Clinton. Some may argue that Hillary Clinton has significantly larger head in proportion to her body, but this is not the case at all when the size of English letters on the wall behind the candidates are compared with each other. The only thing which is needed to recognize this fact, is a pair of normal eyes. These facts are supported by nothing stronger than common sense. (2) 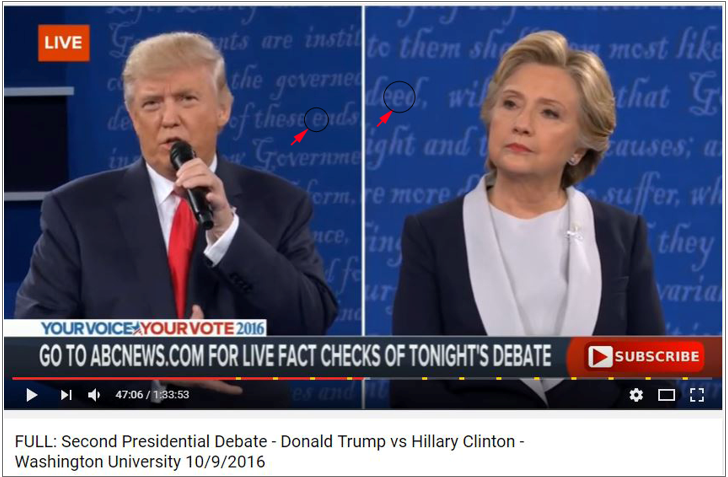 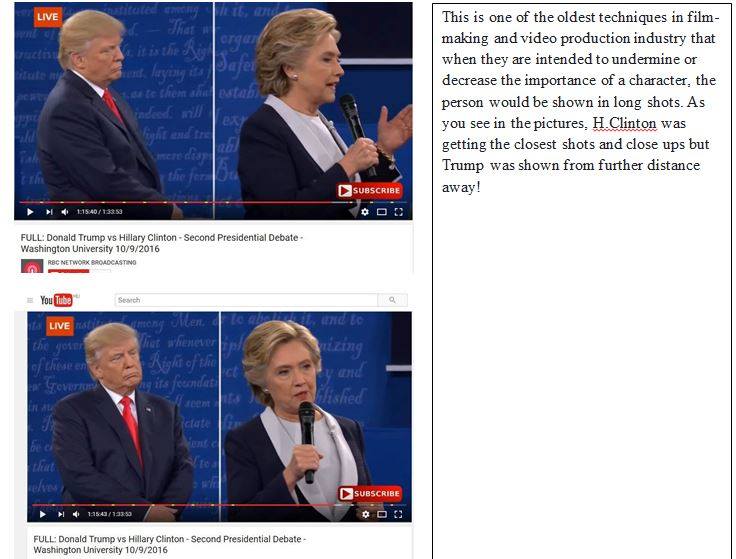 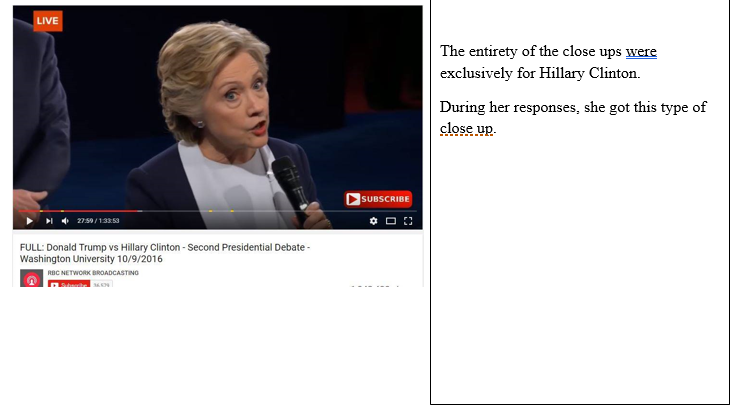 Beyond the visual aspects of the debate, moderators treated the participants differently. For instance in the second debate, once the participants applauded Trump at minute 14:35, the moderator (Martha Raddatz) asked for them to hold their applause, but seconds later, when people applauded Hillary, at minute 15:16, there was no reaction from the moderator. These are just sensible issues which can’t be ignored by unbiased observers.

The latest development in this story was about president-elect Donald Trump reaction to Martha Raddatz coverage of election night where she appeared very sad and stunned by Trump’s unexpected triumph (3). Trump on December 2 at the start of his ‘Thank You’ tour in Cincinnati mocked and criticized Martha Raddatz with these words:
‘How about when a major anchor who hosted a debate started crying when she realized that we won?’ Trump said. (4),(5)

All in all, many false stories or dubious claims against Trump (like the alleged sexual assaults) have received 20 times coverage more than real information coming out about Hillary in mainstream media. Most of the unsubstantiated allegations are constantly used against Trump, while the hard facts like Hillary’s disclosed emails and scandals are disparaged and ignored by the mainstream media, the same trend can be observed in the debates.
Sources :