Trump Cuts Ties with WHO: "China has total control over the organisation"

Donald Trump announced the end of the US relationship with the World Health Organization. In April, the administration suspended the funds the United States gave to this United Nations agency. At a press conference, the US President made it clear that he had cut ties with the organization because he had not begun the reforms that the United States demanded. 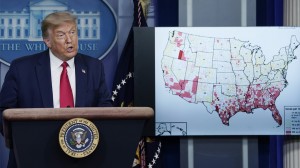 On the other hand, China promised a “Counter-Attack” after Trump announcements during the previous period. “In fighting the epidemic, the Chinese government has always been open, transparent and responsible” claimed Zhao Lijian, the deputy director of the Chinese Ministry of Foreign Affairs.

“We talk about the facts, we present the facts, and we use common sense. We are doing everything possible to protect the health of the population and promote international cooperation” he added.

Trump said that the World Health Organization “revolves around the orbit of China and does not oppose it for anything,” adding that he decided to suspend the funding of the organization, which is given by the United States 450 million dollars annually, while China is funded by only 38 million dollars.

US President Donald Trump has pledged that his administration will submit a “careful” report on the details of the origin of the new Coronavirus, as US accusations of China intensify with responsibility for the pandemic. “We will present a very accurate report on this subject at the appropriate time,” Trump said, in a press statement made today at the White House. Stressing that China should have informed the United States of the record of the outbreak immediately after its start

The Chinese government refused DC’s appeal, mentioning that it is just “politicization”. However, Beijing is making an evaluation of the global response on the virus.

These announcements come in an explosive climate with Beijing, regularly accused by the American president of being responsible for the spread of the coronavirus, but China had not immediately made any significant reaction.

Trump announced, that he saw evidence proving that the Coronavirus came from the laboratory of the Virus Institute in Wuhan, considering that the spread of the pandemic was due to China’s failure to stop it or its will to happen, but that the American intelligence and the World Health Organization confirmed that this strain has a natural origin. 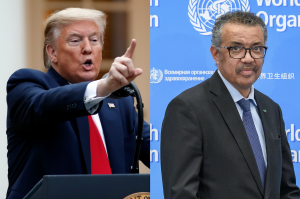 The WHO response to this conflict was not efficient, The UN organisation became as a fighting ring between the two superpowers, therefore, we will for sure wait for a diplomatic decision from Dr. Tedros Adhanom Ghebreyesus , the head of the WHO as he already mentioned: “The contributions and generosity of the American government and people to global health for many decades have been overwhelming and have brought great benefits to public health around the world,”

“WHO wants this collaboration to continue,” he said during the previous virtual conference in Geneva.