The Top 10 moments of the Oscars

When we heard that Ellen DeGeneres was going to host the 86th Academy Awards this year, after Seth MacFarlane’s scandalous performance the year before, we already knew that we were in for a treat. With talented actors and truly inspiring films on the list, the only thing that was missing, was the memorable moments that were either planned or were spontaneously made. Here are the top 10 memorable moments of the Oscars: 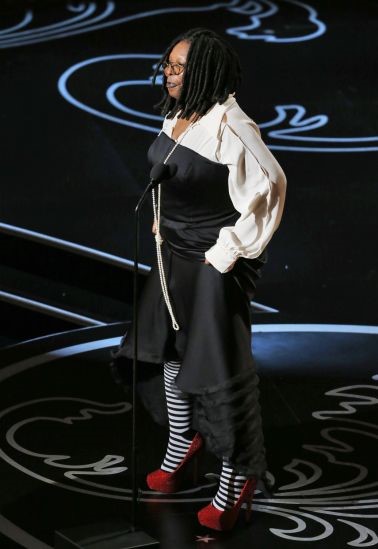 In a segment dedicated to the 75th anniversary of the Wizard of Oz, Whoopi entered the stage in a long black dress and delivered a beautiful speech, but what stunned the viewers the most was when Whoopi lifted her dress to show off her gorgeous wicked witch tights paired with Dorothy’s ruby slippers!

No Oscar would be complete without musical performances, and Pharrell William’s “Happy” perfectly set the mood in the theatre, making the lovely Lupita Nyong’o and Amy Adams get on their feet to dance. The singer’s charm even got the nominated Meryl Streep to shimmy for him.

When Ellen was giving her monologue she included the Oscar winner’s accident from last year, but surely not even the famous talk show host thought that Jennifer would fall once again, right at the beginning of the red carpet. But in fact she did. When the actress was getting out of the car she seemed to have tripped on something, grabbing into the person in front of her, and falling down. Lawrence brushed it off, and continued to shine in her gorgeous red Dior dress.

After the amazing performance by pink – dedicated to the Wizard of Oz   – Ellen, dressed up as Gilda the good witch from the movie, came out to the stage, wondering why they didn’t call her name to come out and perform. A hilarious sight; it was sure to make everyone laugh at the Oscars.

6. Let’s hear it for Adele Dazeem!

Oh what an embarrassing moment for poor John Travolta, but it sure made audiences laugh when he was announcing the next performer, Idina Menzel, as Adele Dazeem (or so we think that is what he said) to perform the Oscar winning song “Let it go”. An awkward moment, but it did not degrade the enchanting performance by the Broadway singer.

Celebrities just can’t get enough of being the center of attention. Jared Leto was one of the few actors who walked into someone’s photo, making a silly face, yet my favorite photobomb is definitely by the lovely Benedict Cumberbatch, who jumped up high and made a crazy face when the photographer was taking a photo of the band U2.

One of the most beautiful, honest speeches that the audience could hear on Sunday night was Lupita Nyong’o’s, who won best supporting actress. Her speech brought tears to eyes of many, when she said “It doesn’t escape me for one moment that so much joy in my life is thanks to so much pain in someone else’s, and so I want to salute the spirit of Patsey for her guidance.” She also tells young dreamers to never give up on their goals, as you can reach anything, be anyone that you want to be.

After thanking his mother and his brother, Jared Leto mentioned that he is with Ukraine and even though we are here and happy, his heart goes out to them. It was a heart-warming speech, but what was shocking was that right after he finished, Russia shut down the airing of the awards immediately.

2. Pizza! Did anyone order some Pizza?

Ellen sure did! The host surprised the audience with some pizza, which she and the pizza delivery boy handed out to the famished celebrities. What was more funny was the fact that the pizza boy did not know that he is going to be live at the Oscars, nor did anyone expect pizza to be handed out to them. Ellen then collected tips from the stars that she later gave the to the man in her morning show. What a day for the pizza boy!

1. Everyone, get in for the Selfie!

Last but not least, my favorite moment was when Ellen shut down twitter with her now famous Selfie with a group of celebrities! She asked audiences to re-tweet the photo to break a record, and she did, as the picture was re-tweeted 3 million times!

The Oscar’s once again was a successful night, full of surprises and entertainment to its fullest. All nominees were very talented, it is a shame that only one person can win per category. Although the night is over, everyone is eagerly awaiting the next, 87th Academy Awards.