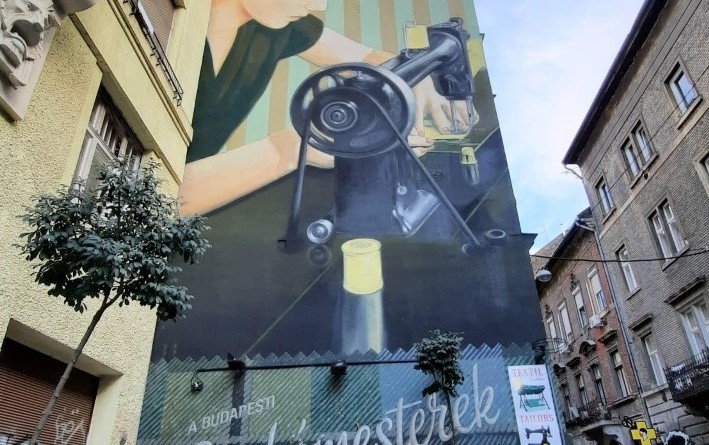 Words and picture by Helia Shahmohammadi

In today’s climate of Covid, many of us have been looking for fun and also safe activities to do in Budapest. One of the things that is not only safe and fun, but also free are walking tours. From the communist history of Budapest to the most famous sights of the city, there is a tour for everyone. In this article, I am going to share my experience in one of these tours that is about street art; so if you are interested in art or are willing to get out of your house and explore Budapest, this is the article for you.

I found the tour event on Facebook and decided to take it to see some of Budapest’s lesser known or talked about street arts. The tour started in a Saturday evening in Blaha Lujza tér and went on in the Jewish neighborhood in 7th district for almost two hours. Moreover, each tour contains 12 people maximum and the guides advise everyone to maintain a safe distance from each other, as a result, it is one of the safer activities during the pandemic.

The Alternative Street Art Walking Tour started with the guide giving us a small lecture about the history of the Jewish community during the second world war, and how two thirds of the Jewish population were lost during that time. The guide went on to explain about how for many years after that, the 7th district and most buildings in it became dumpsters. Until not long ago when Budapest became a touristic destination and the 7th district became the heart of street art. A place for artists to show their works to the world by painting the city.

As the tour went on, we looked at some murals. One mural that caught my eye was of a woman and a sewing machine in a street full of tailor shops. The guide explained that the whole neighborhood used to be full of tailor shops and after the second world war, the number of tailor shops diminished over time. The group behind this work is called Neopaint. They wanted to bring the 7th district back to life. In front of this mural is a piano and to the left side of it there are tailor shops and a miniature statue of Rezs Rezső Seress, a Hungarian pianist and composer mostly known with his ‘Gloomy Sunday’ song.

When talking about street art it would be a waste of time if we did not talk about graffiti. We went from Wesselenyi utca to Dob utca looking at art that unknown and yet famous artists created all over the city. The guide explained that most of these works are in the form of stickers, to save the artist some time to escape while they are painting at night. Some of the graffities are painted just to bring smile to the viewer’s face; for example, one artist paints characters with huge eyes and hearts and we can see over 700 of these cute creatures all over the city. Another artist wants to take over Budapest with fish paintings, he even paints fish food for his 1,400 fish all over the city. A huge amount of graffiti was also political. From Viktor Orbán’s (the Hungarian Prime Minister) eyes to describe how the government is always on watch, to him riding a miniature train as a ridicule of him wasting millions of government funds to make his birthplace a touristic place. Hungarian graffiti always has something political to say.

All in all, this tour was free but tipping the guide is always welcome. It ended in Szimpla, an artsy ruined bar and café. I met amazing people who were either traveling or just wanted to make new friends. Although it is hard to talk on a tour because most of the time the guide is talking, you can have a drink and chat with the people you met in the tour right after the tour is over in Szimpla. As a person who has been living in 7th district for almost two years, I guarantee you will learn a lot on tours and make awesome friends along the way.