Every semester the Student Union plans a weekend trip to a nearby city. This fall the Union organizers asked for student input on where the excursion should take place – a group Facebook poll was published and the votes poured in; the clear winner was Amsterdam. But, because of logistical restraints and funding concerns, the runner up was picked: Belgrade!

Belgrade is the capital of Serbia and a sort of pre-EU time capsule. Serbia is neither in the EU nor the Schengen zone and thus has no obligation to be held to the same ‘European’ standards (i.e. smoking indoors). This was readily apparent when our train crossed the Hungarian-Serbian border and all the smokers got up from their seats to congregate in the corridors to light up their cigarettes.

When we arrived at Belgrade main station, we exited the train to stand in the cold and wait for instruction. There’s nothing like the smell of burning coal on a brisk morning. Our group of roughly 15 students navigated the tram lines successfully to the hostel without splitting up. But, like a caravan, we were slow moving—the front waited for the slackers and while they waited, they in turn fell behind and the cycle repeated itself. After checking-in, our large group split into subgroups of mutual interests. I, for one, joined Team Breakfast.

The food and groceries are considerably less expensive than in Hungary. A large breakfast (cola, coffee, omelets, corn-bread and paprika relish) at a sit down restaurant cost me about Ft 1,500. Fast meals were even cheaper.

Like Budapest, the Danube flows through Belgrade. Overlooking the river from a strategic vantage point sits a beautiful fortification with a well maintained park. The park was full of chess-hustlers and souvenir vendors hawking their collectible trinkets. I made the mistake of petting a stray dog – which I thought belonged to a vendor nearby, only later to discover that the dog had followed me for a good kilometer down the road before finally giving up and picking a new, kinder foreigner.

We visited the Tesla Museum for our official group school outing—the experiments were quite shocking. The museum gave a good oversight of Tesla’s life and character as well as blending in a mix of hands-on activities demonstrating the marvels of electricity. On our own time, with a few friends, we walked through Belgrade on the hunt for still standing ruins of bombed out apartments from the NATO bombing of 1999. It was emotionally moving to stand in such a location where less than two decades ago bombs had rained down. 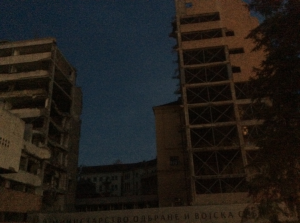 The Student Union trips are great fun and should definitely not be passed up – especially if the college is partially subsidizing the trip!

The total cost of the trip:

Train ticket: FREE (8000 Ft deposit which was refunded at the end of the trip)

Getting to know your classmates in an exciting, new city: priceless