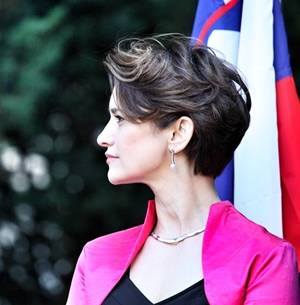 Last month McDaniel College had the unique chance to host her Excellency the Ambassador of Slovenia in Hungary Ms. Ksenija Škrilec.

The reason for Ms. Ksenija Škrilec’s visit was to give a lecture for students in a class which is focused on the politics of global feminism. Although she was speaking for a specific class the discussion was open to everyone and students from other courses were also able to attend. Also in attendance was Victor McTeer, a famous attorney and civil rights activist from America, who also came to the university to give lectures.

The ambassador was accompanied by her assistant from the embassy who supported her needs throughout her visit to the university including assisting her with some translation.

Ms. Ksenija Škrilec came prepared with papers for her lecture and spoke for over an hour on Slovenia’s take on feminism and gave some interesting and informational statistics and data to the students. It was especially informative to the students due to the fact that Slovenia is not a country many have studied before and it was something new.

The presentation given was focused on the issue of gender equality and all the programs that have been implemented in Slovenia in order to achieve the equality they have been able to. Ms. Ksenija Škrilec spoke about the empowerment of women and their inclusion is a primary goal in Slovenia but she also said that although many are empowered there are still many who are not. 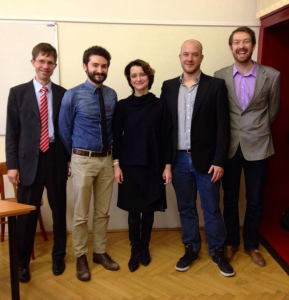 Interesting statistics included that there are 35,6% women in parliament and 31.8% women as councillors. She told students that this number is much higher than many other countries in Europe including Germany’s.

After Ms. Ksenija Škrilec’s talk there was an opportunity to ask questions. Some questions were provocative and others were aimed at her personal life which either Ms. Ksenija Škrilec didn’t seem to want to answer or chose to stay impartial on such as with a question where she was asked to compare Hungary to Slovenia in feminist terms and chose not to answer the question. When asked about girls living in poorer areas and their opportunities to become diplomats her Excellency replied “Slovenia is very egalitarian and it is known as such in international relations; regions are not very different and there is not much gap between them therefore this is not THE issue”. Ms. Ksenija Škrilec also declined to answer a question about the impact the positive programs which she had been speaking abour had had on violence against women as she said she was unaware of the answer.

After her speech Ms. Ksenija Škrilec gave everyone nice little badges with “I love Slovenia” written on them.