So you haven’t read The Secret History by Donna Tartt? That’s not surprising, as the book, credited with popularizing the ‘dark academia’ subgenre, is pretty far from being required reading in any American academic institution, since it doesn’t exactly paint the most flattering picture of those – as observed by book reviewer Beata Garrett.

It’s also not Donna Tartt’s most famous published work – that would be The Goldfinch, which won the Pulitzer Prize in 2014. But The Secret History is her first published novel, and there’s always something to be said about the work that put a now widely renowned author on the map. The book has something for everyone: intrigue, drama, scandal, and murder – some of these themes may be intense or discomforting, so reader discretion is advised.

This debut novel is an inverted detective story (sometimes called a ‘howcatchem’), not dissimilar to many modern TV shows. “Criminal Minds” and “Death Note” are examples of this genre, where the perpetrators of a crime and the crime itself are revealed early on in the story, which is typically and is also in this case, murder. Though even if you don’t like those shows, I’d still recommend The Secret History, as the down-to-earth relatable drama slowly becomes more and more bizarre, and eventually more believable. 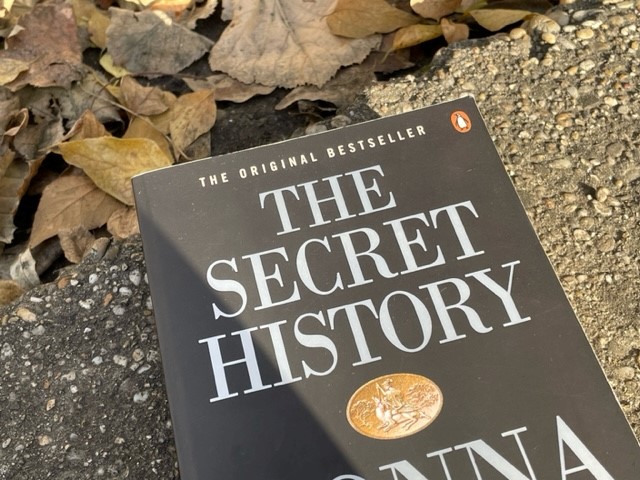 In fact, the book is inspired by Donna Tartt’s time at the now infamously decadent Bennington College, where Tartt was friends with two other, now famous, authors – Jonathan Lethem, writer of Motherless Brooklyn, and Bret Easton Ellis, of American Psycho fame. The Secret History was published in 1992, when Tartt was only 29, and it was a huge success – whereby it’s typical to have an initial print run of 10,000 copies, it had a print run of 75,000.

The plot is narrated by Richard Pippin, reflecting on his college years. He, against his parents’ wishes, has chosen to leave the family-owned gas station in Plano, California, to study literature across the country, in Vermont. His family will still support him, just not as much as if he’d done what they wanted and stayed to support the family business. Initially, he attended med school in the hopes that it would alleviate his financial burdens, but he changed majors and eventually schools as he found his passion in an elective Ancient Greek language class, and gradually became unable to stand medical school.

Now, in Hampden College, Pippin does alright in literature, but is unable to join the Greek class, as the famously peculiar professor who teaches it only accepts some students, particularly wealthy ones. Despite another professor’s attempts to deter him, he manages to convince the five other students of the Greek class to recommend him to the professor, who requests that Pippin drops all his other courses and from now on only take courses with him. Don’t worry, he has a deal with the dean of the college and it’s totally allowed for some strange reason. The five students eventually become his close friends, but sometimes they act very secretively and strangely around him, which grows into paranoia that they are suspicious of Pippin and his made-up origins of coming from “oil wealth”. But to learn the actual mystery of The Secret History and to try to deduce the meaning of the title, you should really read the book for yourself, as the realism gradually devolves into the bizarre and the esoteric.