The Sacred Sites tour was one of the many interesting weekend programs that were organized by the teachers of McDaniel College Budapest last semester. This architecture trip was organized by Professor Péter Bokody and it had two parts, Sacred Sites I. and Sacred Sites II. In the first part of the architecture field trip the group visited the Rumbach Street Synagogue and The Diamond Way Buddhist Meditation Center.

The group met at Astoria on that beautiful spring weekend day and we were altogether eight people. The first destination was familiar to almost everybody, because it’s located in the VII. district in the old ghetto of Budapest where the Jews were forced to live during World War II. This part of the city is now also known for its nightlife, because these streets give home for a lot of ruined pubs and bars were foreigners and young people like to go out. The synagogue was designed by famous Otto Wagner Viennese architect and it was was built in 1872 in the so called „Synagogue triangle” of Budapest , but most of us didn’t know that the Rumbach Street Synagogue is not functioning as a Synagogue since 1959. The building is ruined since World War II. and it went through some hard times, but in 2006 the Jewish Community of Budapest got it back and it is functioning as a museum now.The Moorish Revival Synagogue has eight sides, unfortunately the interior is badly in need of restoration, the octagonal, balconies, domed synagogue intricately patterned and painted in Islamic style is exquisitely beautiful. It has the same yellow-orange motives as the Dohány Street Synagogue and also similar to the Kazinczy Street Synagogue, these three Synagogues build the „Synagogue triangle” of Budapest. Our Sacred Sites guide Professor Bokody showed us every important part of the Synagogue and explained the meanings of the different architecture motives and styles precisely. 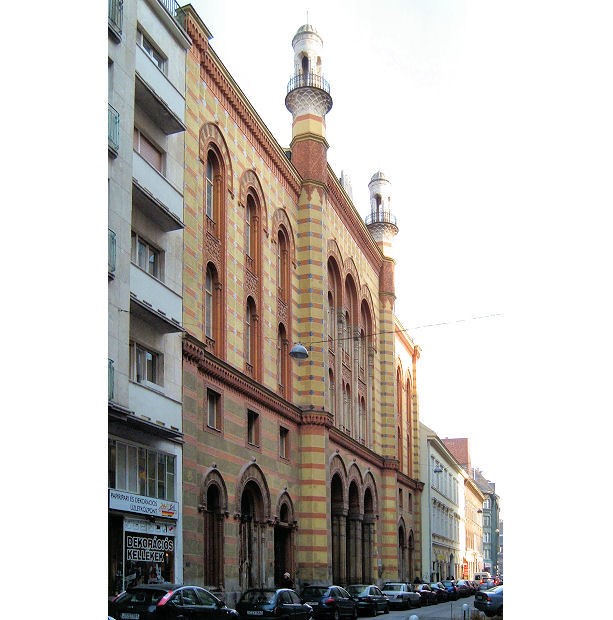 Our second destination was something more special and unique.It is located very close to our loved College in Huszár Street just next to Rózsák Tere, a Buddhist Meditation Center called Diamond Way. When we arrived most of us didn’t really know what to expect, but soon our guide who was a very nice and joyful lady explained us what their Kagyu Base Project is about. After a long search and many years of moving, they located in Marchsss 2001 a ruined building belonging to a beer brewery in the heart of Budapest. This place became their current meditation center and the registered seat of their religious organisation, now it is Europe’s largest Diamond Way Buddhist center. It is a place where they wish to preserve the living transmission of Diamond Way Buddhism by developing an international and national cultural and meditation center.

In order to achieve their goal, they were able to renovate the building, which was in a poor state and its facade, which is classified as a historical, protected monument. They created a modern meditation hall, a high quality dharma shop and library and many flats where important members of their community live. By reconstructing the buildings forming a U–shape around the central courtyard, they were able to multiply the possibilities for meditation courses, teachings, encounters and exhibitions. They even have a very nice bar with a restaurant there, where they can meet before and after the meditations.

At the time we arrived there was a meditation going on in the meditation hall, so first we sat down in the restaurant where we got some delicious tea, but after that we had the possibility to take a look at the meditation hall. A beautiful altar was shown to us with interesting pictures of Buddha and fascinating Buddha statues. We sat down there on the meditation pillows and enjoyed the good vibes we got from our guide and from the environment.

Sacred Sites I. was a very interesting program, not only for the Art History major students, but also for the others like me (Political Science) and it gave us some background knowledge about the places some of us pass by everyday. Sacred Sites II. which found place on April 27th was about how art and architecture reflect spiritual belief as well and the group visited the Downtown Catholic Parish Church, Calvin Square Protestant Church and the Budapest Mosque.

Many thanks to Prof. Bokody for the organization and for the guiding, make sure to check out the other McDaniel weekend programs as well.