Rockin’ around the Christmas tree at Vörösmarty tér

It is Christmas time in this fair city and from Hero’s Square to Deák Ferenc, all the way around the great ring of the Körut, the trees are festively illuminated and beckon to be sauntered among. So despite the crisp winter air, you may still find yourself perusing the cheerful streets of Budapest. At some point in your gallivanting, besides the ocular draw of the streets and the trees, your ears may also be perked by the ringle-jingle of a holiday song. Though the Christmas Markets already have much to offer among food, drink and gifts, the music also plays a great role in the enticement of these seasonal centers of cheer. 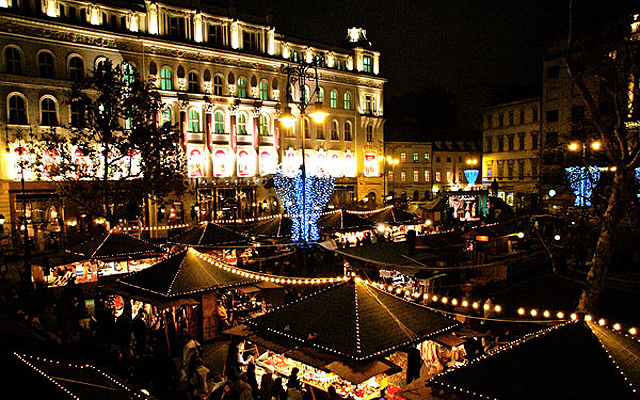 The Christmas Market at Vörösmarty tér is the largest and is also considered the most popular in Budapest. So large, in fact that it has two stages for musicians to perform on. The bigger of the two stages is reserved for larger ensembles or groups with higher profiles, but performances are given on these stages simultaneously from 5 p.m. until the closing of the markets at 8 p.m. These performances occur everyday the markets open, through to the end of the Advent period. I caught up with Bálint Major, who performed with his group Osonó Paszáták, at the smaller stage the past two Tuesdays, to ask him about his experience with the music of Christmas Markets.

Is this your first time you’ve played at a Christmas Market?

It’s definitely my first time. Our manager landed this gig because Patrik (vocals, percussion) played at this Christmas Fair earlier, like last year, and maybe the year before that, with other groups. So, he knew some contacts and our manager called them and they just had to talk money. I wouldn’t say it’s the biggest gig, but it’s definitely paying the best.

What kind of music is usually played at Christmas Markets?

There are choirs singing gospel and maybe kind of folk-ish songs, or maybe some children’s program. But also there’s all kinds of music, not very big bands or rock music, but acoustic duos or trios, mostly, or choirs, which suit the Christmas theme. You don’t want to disturb the people. If somebody hears the music from blocks away then they could come there, “Oh there’s music here, okay I’ll listen and just get a mulled wine, or something I don’t need, but that’s very expensive.”

Is there any difference between playing at a Christmas Market and a normal concert?

Actually, our drummer plays a full set and we have an Ableton-Programmed Moog Sub Bass, which is right on time with every song, since we have no bass player. So Patrik loads its, hits space and then it goes. He has a metronome in his ear, which goes tak-tak-tak and he counts in 1-2-3-4 and there we go. And there’s Dori, playing the violin, and I’m playing the electric guitar, loud and distorted, but here you can’t do that, you know. So we just have a cojone and a hi-hat for the drums. I played an acoustic guitar the first time, but it was very hard to play it because its so cold your fingers lose their senses, so I had to switch to electric. Dori plays the same, there are no alterations there. But I had to change some of the chord progressions, you know. Because if you play acoustically, you have to play it lower on the neck to have some bass notes, so it sounds more full.