Residential wood heaters are one of the biggest sources of air pollution in Hungary. 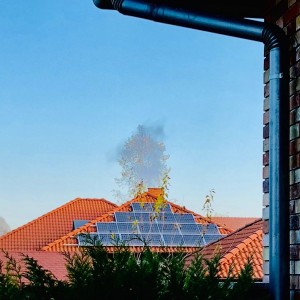 According to the European Environment Agency, outdoor air pollution causes approximately 400,000 premature deaths in Europe every year, mainly as a result of particulate matter released into the air. The so-called PM2.5 and PM10 indicators represent fine inhalable particles with diameters smaller than 2.5 and between 2.5 and 10 micrometers. These particles have a multitude of detrimental effects on our health, because not only do they lodge deeply into our lungs, but some also make their way into our bloodstream.
There are many different sources of PM2.5, but shockingly upwards of 80% of PM2.5 emissions in Hungary are caused by residential heating according to MTI, a major Hungarian news agency. While air pollution in cities is a well-known problem, non-efficient heating devices that burn mainly firewood is typical to smaller towns and rural areas around the country, places that are otherwise associated with cleaner air. Sometimes keeping the focus on the big picture in the topic of climate change makes us forget about other aspects, like socio-economical factors and solutions based on incrementalism.

While advocating for gas-powered heating might seem counterproductive if we are trying to make a concerted effort into a more sustainable future, the jump from burning firewood to energy-efficient houses would be impossible for many households. The implementation of green energy can always be the ultimate target, but to tackle air pollution as a whole, we must also look into smaller local problems.

In 2016, air pollution-related death rates in Hungary were the second-highest after China, reported hvg.hu, a Hungarian economic newspaper. Emissions of “black carbon” (which is a by-product of burning wood) are also one of the main drivers of climate change according to multiple recent studies. According to data gathered by the Hungarian Central Statistical Office, the amount of biomass used in Hungary had doubled between 2003 and 2008, and remained roughly constant since then, mainly because of increasing gas prices. Amounts of PM10 are also higher in the heating season than in the summertime. Another interesting insight published by the office is that a large portion of the pollution is not even calculated in this figure because of the significant amount of wood that is illegally cut to evade taxes.

The use of residential wood heaters comes down to either of two reasons: necessity or frugality. Poverty forces some people to use alternative sources for heating, sometimes even as a means of survival. Burning lumber, pallets, old pieces of furniture impregnated with adhesives and chemicals, or sometimes even trash has however also become an alarming trend in many households that are above the poverty line, essentially as a means of cutting back or eliminating heating bills. The negative effects of this activity in Hungarian towns are painfully obvious. A thick haze can settle on entire areas, the smoke penetrates cloths, causes eye irritation, and reduces visibility as it settles on the streets and gardens in between houses. Of course, these are only the immediate, visible effects that normally should be alarming enough for a thoughtful person. Rather strangely though, it seems to be a non-issue among Hungarian residents.
One factor that further complicates the issue is that the Hungarian government encourages the use of firewood, by freely distributing wood cut down alongside roads. Helping those most in need and less fortunate families below the poverty line is our duty as a society, but at the same time, this legislation is deeply flawed and only further exacerbates the problem.

Heat smartly
It has to be pointed out, however, that there are some legitimate efforts from different Hungarian local governments and governmental institutions to drive back or modernize residential wood heating systems. The so-called “Fűts okosan!” (“Heat smartly!”) campaign is a good example of raising awareness and providing useful information. Another positive step forward is that many domestic furnace and fireplace brands only manufacture products that are in compliance with strict German and Austrian regulations. A typical modern eco-labeled wood stove pollutes less than half as much as an old wood stove, although still more than 100 times as much as district heating and gas. Furthermore, new legislation came into effect in 2020, which has banned non-eco-efficient furnaces for central heating, and will eventually ban them from individual rooms too, starting in 2022.

On the European scale, there are different treaties and accords to tackle the problem. For instance, the Stockholm Convention requires participating countries (including Hungary) to reduce emissions of persistent organic pollutants. Unfortunately, another initiative called the Ecodesign Directive is not yet applicable in Hungary. The directive introduces emission requirements for appliances like wood stoves and boilers ¬– which is an example of the exact type of direct regulation Hungary would desperately need.

The accountability for using prehistoric means of central heating in the 21st century in a member country of the European Union falls on different groups. The most vulnerable populations, who simply cannot pay the price of gas heating, should be taken care of by a proper, forward-thinking government subsidy program. For those who consciously ignore the dangers and engage in reckless behaviors like burning pieces of furniture or trash simply because of stinginess, a solution could be outright bans with heavy fines. Looking at the bigger picture, tougher regulations should be implemented to mitigate the problem at the root cause. Raising awareness by more extensive government campaigns could shed light on the obsoleteness of residential wood heaters, eventually convincing large populations to abandon these appliances for good.