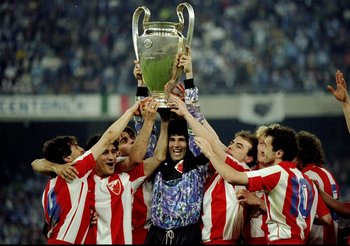 The year is 1991, the place Bari, Italy. The Champions League final sees Yugoslav team Crvena Zvezda or ‘Red Star’ claim the title with a 5-3 win on penalties against Marseille. The top players of the Serbian side include a number of world class Serbs, Croats, Macedonians and Bosnians. The best of the best of the Former Yugoslav Republic had to offer find themselves in the team that clinched ultimate football glory by winning the Champions League title as well as the title of World Club Champions the same year.

Those times are long gone. The glory, the quality, the money, the popularity… they’re all gone. It seems like good football has abandoned the Balkans.

This article is an opinion of a young, disillusioned Croatian football fanatic who missed the glory days of Yugoslav football, and frankly, wants it back. The solution: a highly disputed concept of a regional league that would see the countries of the Ex-Yugoslav Republic come together in a new, stronger, more competitive kind of league. But unfortunately, that’s much easier said than done.

The advantages of this league would be vast, from a financial aspect all the way to a rise in competitiveness between teams. However, first of all, let’s examine the problems. The overwhelming feeling from people in the region is that it is simply too soon for such a concept to be brought to reality. The countries involved have been separated from communist Yugoslavia for only 20 odd years; separated by a bloody war that raged throughout the region causing massive casualties and a huge divide and hatred between them. This hatred is unfortunately still very much present in the minds of many of my compatriots as well as others from the area. And what better way to express this hatred than in the form of football hooliganism, which is synonymous with football itself.

The countries of Ex-Yugoslavia are plagued by primitive acts of hooliganism and violence that follow football wherever it goes. Even in their domestic leagues, FAs and clubs are battling their ‘fans’, trying desperately to root out violence from football grounds. These problems have been dealt with relatively efficiency in Western Europe by strict legislation, which is not the case in a slow, clueless, bureaucratic system in the East. For that reason, it would be difficult to see a scenario where an established base of serious football hooliganism paired with a competition of countries that ‘just’ came out of a bloody war would not explode into constant rioting. But this can, and MUST change. Football clubs, players, and real fans can no longer be held hostage by a fistful of these mindless, destructive, primitive fools.

It is my honest belief and not an exaggeration that the fate of football (at least in Croatia) rests in a unified league. I have been a witness to the serious deterioration of football in Croatia over the years to the point where the only joy of football comes from the successes of our national team, of which the majority of the players play for clubs outside of Croatia (for obvious reasons). A regional league would save us from the jaws of football amateurism run by criminals and hooligans, and I believe that this is not far from the truth in any other of the Ex-Yugoslav countries, some of which have it even worse.

The simple facts of the matter are the following: a regional league would bring a market of about 20 million people instead of the small populations of each individual country. A larger market equals better finances. Better finances mean more money, more sponsors, higher salaries, better conditions and more buying power. All these factors result in a higher quality of players and youth programs within teams.

Back in the day, players were not allowed to leave the Yugoslav league to play for a foreign club before the age of 27. Those times are over, players are free to chase the highest bid at any age, and the main challenge nowadays is trying to prevent this. I feel that if there was a higher quality of clubs and talent in the league paired with somewhat competitive salaries (at least with mediocre teams such as Austrian ones or mid-lower standing German clubs) players would not want to leave their home club as soon as possible.

All in all, I believe that the advantages of forming a regional league in the area of the Ex-Yugoslav states are crystal clear. The only problem that stands in the way of this dream is the negative and hateful complex many people have towards one another. But let’s face it, the war is over, and has been for a while, grow up and let’s play some football.