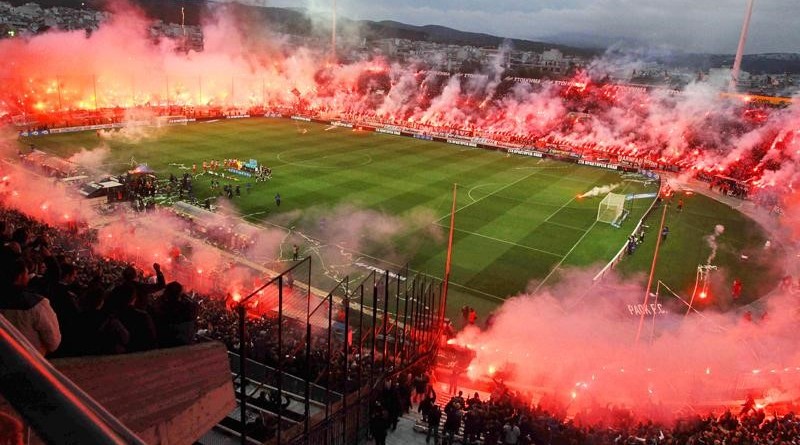 Pyrotechnics, especially flares, are one of the most used tools for the modern-day hardcore football supporter to show and express support for their team in the stadium. Flares are widely used by the different supporter’s groups around the globe to support their team and are amongst one of the most spectacular sights and additions to every supporter’s choreography. Unfortunately, though, in most countries, pyrotechnics and flares are forbidden since they are widely seen as a risk for everyone in the stand as that they cause large amounts of smoke. For us, the spectators and the hard-core supporters, flares mean football atmosphere and to be honest, they just look magnificent and give you that extra kick during a football match, but should the use of such flares be forbidden because of its risk and users be fined?

Obviously, pyrotechnics and flares have a long tradition in football stadiums, and supporters swear on the use of them which leads them to the most creative ideas to smuggle them into the stadium. These methods range from throwing them into stadium a day before the game, to flying them in via a drone, paying off a security guard or having women smuggle them in. The FIFA however, has deemed pyrotechnics a safety and health risk and has therefore advised the different country federations to put the use of pyrotechnics and flares under harsh fines which can even add up to a small prison sentence. FIFA’s arguments are at all reasonable, the flares for example burn at a temperature between 700 to 1700 Celsius and cannot be put out until they have fully burned down and are therefore required to be used in a safe distance to by-standers. This, obviously, is almost impossible to realize in a sold-out stadium, so this safety-distance is never applied which led the FIFA to deem them a danger to every ticket holder. In addition, these flares burn high amounts of sulphur, nitrogen and solid oxides of metal, which causes them to create an immense amount of smoke, which usually will completely fog the whole playing field and force referees to bring the match to a halt. Furthermore, the FIFA states, that flares can cause a panic in the stadium, could have acute toxic effects as well as explosive effects on persons and structure.

Ironically enough, even though flares have been widely used in football stadiums around the globe and have been deemed a security and health risk by the high official football federations, not many cases of injury have occurred or been reported. Football clubs and several federations are working on a solution that would allow supporters to burn flares without facing the risk of fines or imprisonment. Such solutions include “cold” flares, which create almost the same effects as the commonly used “hot” flares but burn with a lower temperature and therefore also do not create and produce such a high amount of smoke. These flares have already been used in stadiums in several Scandinavian countries with huge success. Furthermore, in the United States, several teams have introduced “smoke device areas” in which any kind of flares are allowed to burn since these areas create a safe distance to regular attendees of matches and are monitored by the fire department. Another pro argument for such areas is, is the fact that those areas are usually situated in the stands of the hard-core fans and therefore is still part of their support.

The use of Pyrotechnics will definitely be an ongoing discussion because it is obviously a high risk to use them in stadiums but many also agree that it is part of fan culture and should not be taken away from it because it might hurt the overall atmosphere. Furthermore, if the FIFA and their federations would be more open for a dialogue, new measures could be tried and introduce such as the “smoke device areas” or “cold” flares which both serve as a very well compromise because one thing is for sure, fans will always manage to smuggle the flares into the stadium no matter how high the price and it just looks absolutely amazing. So, it is time to try new ways and keep the fan tradition alive by supporting the fans and giving them legal options which are suitable for them.