Professor Don Lavin: “I just want to be able to live a life that’s meaningful and worthwhile” 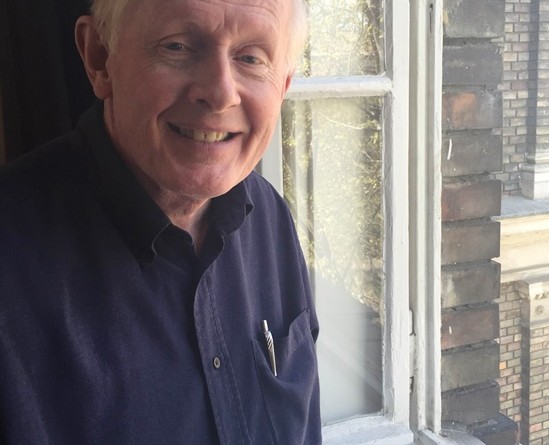 The enthusiastically charming guest professor, Don Lavin, has won the admiration of the McDaniel Budapest students since his Budapest tenure started in January. Born and raised in the USA, he built a successful career in the telecommunications company Bell Atlantic, which later merged with General Telephone to form Verizon. Sixteen years ago he embarked upon his second career as a professor. He jumped at the opportunity to take his teaching to Hungary. The interview by our reporterJulia Klingerwill provide insight into his life path of business and his perspective on life. ”If you’re not the lead dog, the view never changes” he says.

Tell me about your family; upbringing etc.

I have a wife to whom I have been married to for 40 years. I have three children, who are all college graduates. We didn’t have children for the first ten years of our marriage. My oldest son was adopted and he has become part of our family. We adopted him when he was three months old, so he doesn’t know anything different. He knows all about being adopted. My wife always read books to him that talked about adopted children, so I think he got the clue. We told him at the soonest opportunity we could.

He once told us: “I have a pretty good deal on this family. I don’t think I’m leaving anytime soon.”

I like teaching. Teaching is my hobby. I retired from the telephone company, where I worked for 30 years. I was 51 years old when I retired. Now, this is my sixteenth year teaching and I do like interacting with students, I like talking with students, like you. I like being around them. It just makes me feel young and worthwhile. I don’t work for the money. Money doesn’t do anything for me. As I retired, it was embarrassing for my kids, who used to be freshmen at that time. You know, like “What does your father do?” – “He’s retired.”

What are your lifelong dreams?

When I retired I wanted to do three things: One, I wanted to write a book. I like reading. That’s one of my other hobbies. I like reading suspense stuff, like make-believe; fiction etc. Every time I read a fiction book, I always say to myself “I could write one”. I just don’t know if I will or not.

Second, I also always wanted to play the banjo. But, what I didn’t know was, that playing the banjo hurts. So instead I started to take piano lessons and the lady who taught me had said that she didn’t think I would ever be able to do it. I still can’t play the piano, but all I want to do sometimes is to sit at the piano and play: Billy Joel – The Piano Man. [starts singing it]. I still can’t do it.

The third thing I always wanted to do is, to go to the gym every day. I was good at that. I mean I want to be fit, but at the same time I just want to be able to live a life that’s meaningful and worthwhile, and for a guy, who is 67, I get around pretty good. I run half-marathons.

What do you ultimately want to become?

Well I have done pretty much everything I wanted to do in my life. I had a very successful career at the telephone company. I went much higher, was rewarded financially and with recognition much more than I ever thought I would be. So professionally I am very happy. I would like to be a grandfather one day, if I get my kids to marry. And this trip to Hungary and teaching here has given me the opportunity to see a lot of Europe. You know, I have been probably been to eight different countries since I have been here. I have been to Berlin, Vienna, and last weekend Prague. I went to Spain and Morocco and am going to Belgium, Netherlands, London and Paris soon. I enjoy the experience of different cultures.

Tell me about your proudest achievement!

I guess my proudest achievement are my kids. My daughter is sort of the apple of my eye, she is the middle child. She is getting a Master’s degree in a month or so, and I really think she has done a good job. She works really hard. All of my kids are successful, they all live on their own. They have all done different things. My youngest son is a CPA (Certified Public Accountant). My daughter is a school teacher. And my oldest son is a manufacturer/sales guy. The best thing is that all of them are happy.

Was there a person in your career who really made a difference?

Like a role-model? I had a few. I had some people who took interest in my career. Probably the guy who had big influence on my life was Jim Cullen, who became the President of Bell Atlantic. At a younger age I worked for him in Strategic Planning, and he really took an interest in me. He sort of gave me guidance in how to deal with people. You have a tendency to think you’re always right; the sooner you realize that you’re not the better off you’re going to be. I had a strong desire to be competitive and to be better than the guy next to me. That’s how you succeed in the business world. If, in a business, you have more people working for you, you should let them identify with you. People do value that. Cullen was the guy who opened my eyes to that.

Why did you come to the European branch of McDaniel College?

I have been waiting for the opportunity to come here. I tried for five or six years to come, but I was always told I couldn’t come.

I am different to all the academic people. Well, I think I’m different for a lot of reasons. But one reason for how I’m different is that this is my second career, so I like to do different things. I like to teach different courses, and I teach differently than most people do. You know, I’m a business guy, I’m not an academic guy, so I like to do things differently. I don’t want to teach the same courses over and over again, so I came to Hungary to meet students like you and other students here and expand my knowledge and experience. I have always wanted that. I thought it would be a great opportunity and I have to admit it has been. It’s been wonderful experience.

I like the students the best. The campus is good and the kids who come here are good. It is a melting pot of all these different students from different backgrounds. When I taught the January term I had 15 students, who were from 12 different majors and 10 different countries. It was really neat to meet all these people and get a chance to understand them. This is real diversity. People think differently about issues. I’ve enjoyed that so much from being here, but I do have to tell you, I’m not a paprika fan. Paprika does nothing for me.

Did you have any negative experiences in Budapest?

I can’t really say I have. Some of the older people are grumpy. I guess everybody experiences those kinds of people. But the younger people have been marvelous. If you want to ask someone a question, you don’t ask an older person, you ask someone who is young, and they like talking to you. They might not be good at speaking English but at least they try.

What positive things would your last boss say about you?

I think they would say that I am fair, open, that I don’t take myself too seriously, that I’m effective at what I do, my interpersonal skills are very good. They probably think I’m an effective leader for people, because I’m able to deal with people at all levels.

What negative thing would your last boss say about you?

Number one would be that I tend to take things for granted. I have confidence in a person, which is considered a trait, but also could be dangerous, so I have a tendency to trust people to do the right thing, because I would always do the right thing. I can misjudge people.

Secondly, I may not take things seriously enough, I would laugh about things. That’s a good trait and a bad trait.

The third thing would be that I tend to make decisions and do things too quickly and not explain it. I’m not as smart as I really think. There is always another way to do things, however I might not take the advice.

What character traits would your friends use to describe you?

My friends think I’m very funny. They might think I’m not serious, which might go together. They think I have good insights into things, because I can judge people in situations very quickly and very accurately.

Do you think a leader should be feared or liked?

I think a leader should be at all cases liked, and not feared. There are things you do that you have to make sure you do right. Everyone should understand where you’re going, to what direction you are heading. I used to work very hard. First thing I used to do is I would put down people’s pictures and names, so if I ran into them I could say: “Betty Anne, it’s good to see you!” And they would be shocked. I want a person to realize they did something wrong, and eventually they would punish themselves and not me.

My personal philosophy, of which I have a sign in my office, is: “If you’re not the lead dog, the view never changes”, so you don’t have perspective. My philosophy is to establish some kind of a perspective, understand who you are and don’t try to be something you’re not. Try to be a realistic person who is not detached from reality. I am not an ego guy. I look at myself realistically, not that I won’t kid about being a big shot and all that kind of stuff. I am true to myself. I understand what my capabilities are and I like to deal with people.

I warn you it’s a cliché, but I’m interested in your approach, so: Sell me this pencil!

Oh, sell you this pencil? [Laughs] This isn’t a pencil though, you have got to realize. This is something that you need every day of your life, you couldn’t take these notes down without this, and you couldn’t buy Christmas cards etc. This is the most useful thing you will ever have your entire life. You have got to look at the attributes. You can’t look at the object. I always try to emphasize what it can do for you and not what it does.

The things I understand are numbers, finance, and academic theory. What I do is: I apply that to what I’ve learned. That’s the reason why I would say; this is not just a pencil.