A post-Trump campus: a conversation with Roger Casey 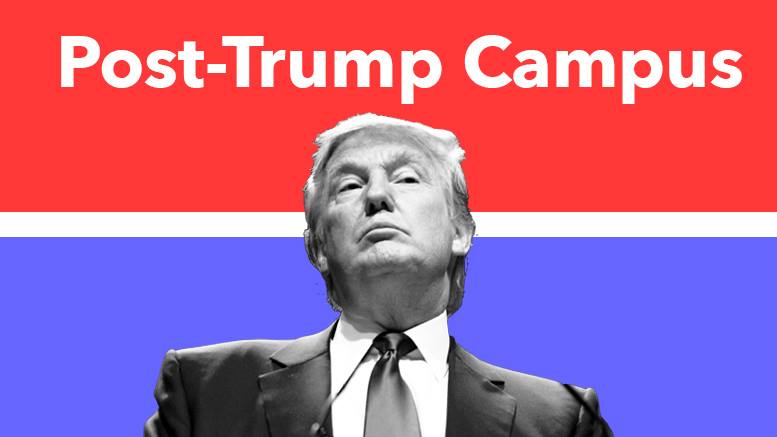 Interview by Stefan Specian
The election of Donald Trump as president has had a definite impact on the student body of McDaniel, no matter their political views or affiliation. While some students celebrate victory, others view the future with a sense of trepidation and concern. This mixture of opinions presents a unique challenge to the administration of McDaniel, and, as such, we sat down with President Roger Casey to discuss how he and the administration at McDaniel will be handling this new, Post-Trump Campus.

President Casey was quick to note that there would be no official, institutional statement on the election.

“I have not really thought that some kind of institutional response was really, frankly appropriate or necessary, at this particular point in time,” said Casey, “I’m concerned that centralized statements then get read by different groups as ‘oh well that must mean they’re supporting the Democrats,’ or ‘that must mean they don’t care about this issue,’ and that’s why I truly tried to stay away from putting this in words.”

Instead, Casey stated that he would be working with administrators and members of the McDaniel community to set up a continual series of events, aimed at addressing the issues that were most salient in the election. Specifically, he spoke of his discussions with Dean Gerl and with Jose Moreno, head of the Office of Diversity and Inclusion.

“I talked specifically to Jose Moreno about a number of contacts that I have through my work as a Kellogg Fellow, and seeing if maybe we could bring some of those people to campus and really engage in dialogue,” said Casey. He also noted that a previous, similar event, the recent visit to campus by NAACP president Cornell William Brooks, was the highest attended he had seen since coming to McDaniel’s campus.

However, he was quick to note that these events would endeavor to accommodate the entire spectrum of beliefs present on campus, and would not be exclusive to one viewpoint or idea.

“What I think is important though is that when we do these educational events, we need the entire spectrum of beliefs present in the room. I don’t think it’s going to do any good to create events in which people can just complain about the face that Donald Trump won, or in another room gloat about the fact Donald Trump won,” he said.

In this same light, he was firm in his beliefs that there is a place for the confrontation of ones views in Liberal Arts education, and that such clashes of ideas and views should not be stifled.

“One of the things that I talked about in my speech this year at the beginning of school, in the Convocation Address, is that education and learning sometimes hurts,” he said, “And, I don’t know that we can nor should protect people from the pain of encounters with perspectives and views with which we disagree, or perspectives which are just counter to the core of our being. I actually believe you learn a lot from listening to those perspectives.”

But when it came to the issue of discrimination in the form of intolerance, though, he felt that there was a definite line that could not be crossed. When it came to issues of sexism, homophobia, racism, or other such sentiments, he was firm in stating that these acts would not be tolerated.

“Any time that we hear examples of comments that are hate speech, or, if we have specific examples where people have been prejudiced against, and there are specific actions associated with that, we have a social code here at the college and we have a process where those things can be reported and adjudicated,” said Casey, citing the First Principles of McDaniel, which he states are the be all, end all in defining what will and will not be tolerated socially at McDaniel.

In a later email to students, Casey would confirm this, inviting all students to re-read the Principles, stating “though they were written specific to McDaniel, I believe they speak well to the wider audience of our nation at present.”

Casey did note, though, that the main goal after such a violation has taken place is to educate the offender, not to punish them. He sees this as the responsibility of McDaniel as an educational institution, and also as a way to ensure that the students are able to learn from their actions.

In regards to the threat of incidents on campus and in the surrounding area, he was sympathetic, but noted that there had been no concrete examples of prejudice, discrimination, or hate speech yet reported to him or the administration, and as such there was a limit to what he could do.

He noted, both in our interview and in a Facebook response to a concerned student, that if a specific incident has occurred, that “we need to know immediately so that our response can be swift and deliberate.”

Lastly, Casey assured students that he and the administration would be open to meeting with student groups representing political affiliations and marginalized groups, and that their right to organize and protest peacefully would not be abridged.