Plastic pollution piling into our oceans

Plastic pollution is a growing, manmade environmental disaster affecting the entire world and is a sign of our throw-away culture. Consider everything in your daily life that is made of plastic: water/soda bottles, cups, straws, grocery bags, technological gadgets, food containers, pens, shampoo bottles, disposable razors, the list goes on. Even if a product itself is not made of plastic, it often comes packaged in plastic. Plastic pollution refers to the accumulation of plastics in the environment that negatively affects wildlife, natural habitats, and/or human beings. Worldwide, over 300 million tons of plastic are produced each year. Despite the fact that plastic is designed to last forever, many plastic products are thrown in the trash after only one use. 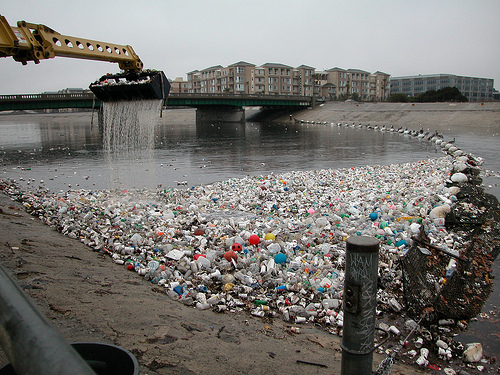 Because our oceans are downhill from everything, a significant amount of the trash we produce ends up there. Many people mistakenly believe that the only way trash can enter the ocean is if it’s dumped there, but wind also carries a large amount of garbage to the oceans from poorly managed landfills. Trash and litter on the street also winds up in the ocean via the weather. The majority of trash polluting our oceans is made of plastic. Since plastic is not biodegradable, it simply keeps collecting and accumulating in oceans, lakes, rivers, etc. Plastic pollution has taken a huge toll on wildlife in recent decades. According to the United Nations, plastic waste causes the death of over 1 million seabirds per year and more than 100,000 marine mammals. When plastics enter the oceans and other waterways, they erode into small fragments known as micro-plastics which are often ingested by animals. Countless birds and sea animals have been discovered dead with their stomachs full of plastic trash.

A well-known example of plastic pollution is a gyre (a large system of rotating ocean currents) located in the North Pacific Ocean known as the “Great Pacific garbage patch”. It contains approximately 3.5 million tons of garbage and is twice the size of Texas. Due to the motion of this gyre, garbage and other materials are unable to escape from it. Over 750,000 bits of plastic have been collected by scientists from a single square kilometer of the patch. All of this garbage on the surface prevents sunlight from reaching algae and plankton beneath it, which could completely alter the food web of the ocean. Oceanographer Curtis Ebbesmeyer said of the patch “We can’t clean it up. It’s just too big. You’d have to have the entire U.S. Navy out there, round the clock, continuously towing little nets. And it’s being produced so fast, they wouldn’t be able to keep up.”

The time to do our part in stopping further plastic pollution is now. We are already at a point where it seems the damage done is irreversible. By buying as few plastic products as possible and re-using the ones we already own, we can make a huge difference in the amount of plastic trash being produced. Also, scientists have now created a biodegradable form of plastic known as bioplastics. Between individuals being careful with plastic use and companies using biodegradable plastics for making and packaging their products, the Earth could begin to recover from our garbage problem.