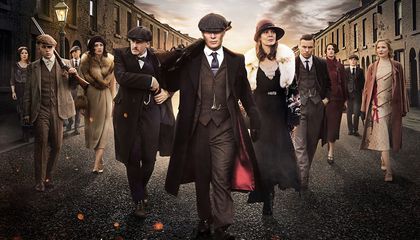 Peaky Blinders is an addicting show I have been watching since 2016. The storyline is so intriguing I have to re-watch the show before each new season comes out. Peaky Blinders is a gangster family epic, set in 1919 Birmingham, England. It is centered on a gang and their fierce boss, Tommy Shelby; they sow razor blades in the peaks of their caps. It is about this family in Birmingham trying to make it up, level by level, to the big leagues of business and entrepreneurship– but with the corruption and greed of other gangsters and politicians, they are not going to let them go legitimate without a fight. The mastermind of the family, Thomas, knows how to connect with the police and government officials. He is a war hero, so he uses his cards very carefully and has no hesitation in making the necessary evil choices to look out for his family.

This show is stellar in all aspects; it is a terrifically paced series, entangled with excitement. Peaky Blinders gets better with each passing episode. The cast has done an amazing job portraying their characters with their signature, stylish haircuts, and costume design. At the heart of it, Cillian Murphy, as Tommy Shelby, gives the best performance of his career. He is so versatile as Tommy, and the range of his emotions and facial expressions are stunning. It also features supporting performances from acclaimed actors like Tom Hardy, Adrien Brody, Aiden Gillen, and Sam Neil. Winston Churchill also made brief cameo throughout all seasons. The show has a wide range of villains, from a Catholic pastor to a Bolshevik revolution activist to the Russian Royal family. While the cast is amazing, the show’s greatness is elevated by the soundtrack.

Peaky Blinder’s soundtrack features dark and moody music from the likes of David Bowie, PJ Harvey, Nick Cave, Radiohead, and the Arctic Monkeys. The type of music perfectly captures the show’s suspense and the tortured emotional state of its main characters. The soundtrack is a window into the mind of Tommy – a tortured ex-soldier who appears to be suffering from PTSD after fighting in World War One. The intro song is “The Red Right Hand” by Nick Cave. What makes it more interesting is they got other artists like PJ Harvey and Laura Marling to make their own cover of the song for the intros.

The cinematography and set design takes you back to 1920s Birmingham. Each season has used a different director-cinematographer team. Every director of each episode puts their own stamp of pacing and editing style while staying in the same visual spectrum. The most significant change in visual style made in the last season was to use a 4K camera– which gave a slightly different cinematic and emotional look compared to the previous seasons.

Peaky Blinders is a hugely stylistic show, bold and strong, from the plot and cast to the soundtrack and cinematography. This series is definitely worth watching at least twice. The show’s 5th season, which may be the last, takes the family to Westminster. The show is airing on BBC, and it will also come to Netflix on October 5th.