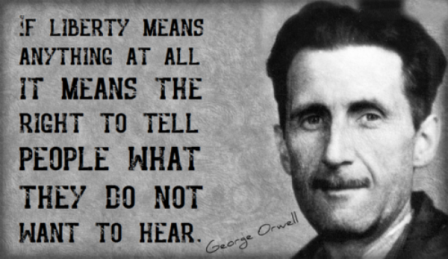 Liberal terror can be defined and identified as the leverages which force societies to affirm the pre-existing liberal normative frameworks and visions of the world. Liberal terror suppresses and stigmatizes any alternative opinion and labels it as radical, extremist, sexist, racist, xenophobic, homophobic, etc. This approach to the world considers all ideas other than liberal thought as unsafe, unethical, and submissive, it is re-categorization of violence, it is a violently neo-fascist attempt to curtail public dialogues.
The remarkable majority of people are afraid of these new social stigmas and are alienated by liberal terror. People no longer dare to speak their minds freely. They cannot even tell a joke without considering what is politically correct. In a healthy atmosphere and society, liking or disliking a joke is up to the audience, and the speaker should not be afraid of the consequences of his words. In the liberal ontology, even ethics is subordinated to liberal thought, and nothing should break the liberal hegemony in the political sphere. These kind of liberal views are mainly imposed by leftist- globalist ideologues who have the upper hand in the media as well.
“To learn who rules over you, simply find out who you are not allowed to criticize.” (Voltaire)
Freedom of speech, the ability to express yourself, has turned to the liberal freedom from speech, in which they suppress any speech they do not like. The censorship in Europe bans everything labeled hateful, hurtful, or critical of religions, particularly Islam. The same trend in the United States is going on; based on a survey of Foundation for Individual Rights in Education (FIRE), more than half of American public and private colleges currently impose politically correct speech codes. This new freedom from free speech has pushed the colleges to disinvite the speakers they dislike, including Condoleezza Rice, the former secretary of state, and Ayaan Hirsi Ali, a feminist and critic of Islam. The newest threat to freedom of speech is ‘Trigger Warnings’, the code that says you are about to read or hear something that triggers a negative emotional response. A 2014 New York Times article cited an example of a student who requested trigger warnings for the classic American novel The Great Gatsby, because it, “possesses a variety of scenes reference to abusive misogynistic violence”. Intellectual comfort is not a right, especially when we want freedom of speech. (1)
During the year 2016, at least three major political events can be considered as a backlash to liberal terror and the thoughts they want to dictate to the people. The Brexit referendum, the Colombia referendum, and the U.S. presidential election are three events that shook the world of politics in 2016. In the case of Brexit, all of the polls showed that public opinion was against leaving the European Union. The supporters of leaving the EU were labeled as fanatic, xenophobic, uneducated, etc. Consequently, the people who were supporting the idea of leaving the EU, afraid of the social stigma, either censored themselves or lied to the pollsters. But when the people could vote anonymously, they could express themselves freely and voted for leaving the EU. This is an obvious example of liberal terror, which has an impalpable suppressive effect.
The same trend was followed in Colombia, where the government suggested a referendum for peace with the FARC rebels. The Colombian People, afraid of social labelling, told the polls that they would vote for peace, but on the referendum day, the results was against the peace proposal.
The domino effect of the surprising political events of 2016 was completed by the U.S. presidential election, where an unusual candidate won the election when most of the polls suggested that his victory was the most unlikely thing that may happen. The supporters of Donald Trump, afraid of being labeled with the same false accusations that the mainstream media attributed to Trump, did not disclose their opinions in favor of Trump to the polls till the Election Day. But on the Election Day, all of the liberal – leftist media and polls suffered the most embarrassing humiliation of their history.
“I disapprove what you say, but will defend to death your right to say it.” (Voltaire)
All in all, the political developments of the year 2016, depict that people are fed up with political correctness. People and societies need candor. People vote for the one who speaks his mind not the one who tries to be politically correct. People are tired of alienation by liberal terror and need to be free to express themselves. Freedom of speech is a basic human right which is undermined by those who seek ‘intellectual comfort’ and freedom from speech. The political upheavals of 2016 are really all that needs to be said.
Source