Up north, on the border of Sweden and Finland, flows one of Europe’s biggest unharnessed rivers, the Torne River. The river is rich in fish, including salmon, which travel upstream in masses to lay eggs. Therefore, it is no wonder that the river valley area is famous for its traditional fishing methods and of course, tasty fish dishes. The absolute trademark dish of the area is the creamy salmon soup. 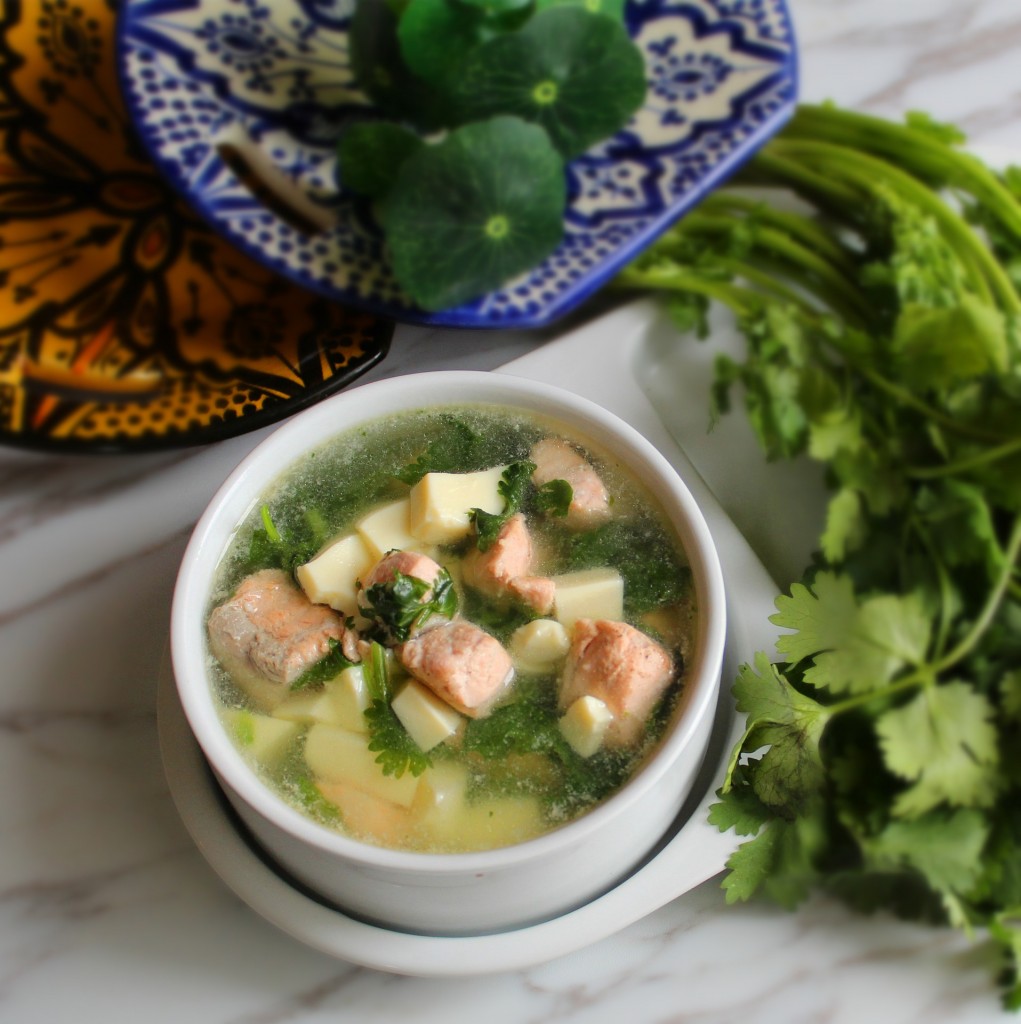 There are as many salmon soups in Finland as there are chefs, but the basic ingredients are always the same: broth, root vegetables, fish, cream, and fresh dill. Inhabitants of the valley area would start their preparations by searching the freshest fish of the day from the local markets and boiling the broth from its leftover parts. However, frozen options such as salmon cubes from your corner store lead to a perfectly satisfactory outcome. That way, the soup is fast and easy to make, and a tasty everyday option.

In my recipe, the broth is prepared with butter, onion, and traditional spices such as bay leaves and allspice. The vegetables are then boiled in the broth until done, the salmon is gently cooked after that, and finally, the soup gets its perfecting touches from cream and dill. Fresh dill often is not available and can be replaced with the grounded option from herb shelves of the supermarket.

When the main steps of the soup-making are followed, the recipe allows flexibility according to personal taste. For example, when I am expecting guests, I will slip in and simmer 2dl of white wine before adding any water. Hungarian Irsai Oliver goes well with that as well as the final product. The soup tastes best served with dark bread and butter. Let it sit for maximum taste.

Chop the onion into small cubes. Peel and chop potatoes and carrots into slightly bigger cubes. Add butter into a big soup pot and lightly fry the onions and carrots. Once they are sautéed, add water, soup cubes, bay leaves, allspice, and a dash of salt. Bring to a boil slowly.

When the water is boiling, add chopped potatoes and let them boil in medium heat until all vegetables are just about cooked through in approximately 5 to 8 minutes.

In the meantime, remove any skin or bones of the salmon. Then chop the fish into cubes like the previously prepared vegetable cubes and add to the pot with cooked vegetables. Turn down the heat to medium-low to let the salmon cook gently without boiling.

When the salmon has turned from pink to light rosa, turn off the heat. Add cream as well as dill and salt according to your own taste.

Serve with fresh bread and butter on the side.