Non-Lethal Weaponry can be Deadly 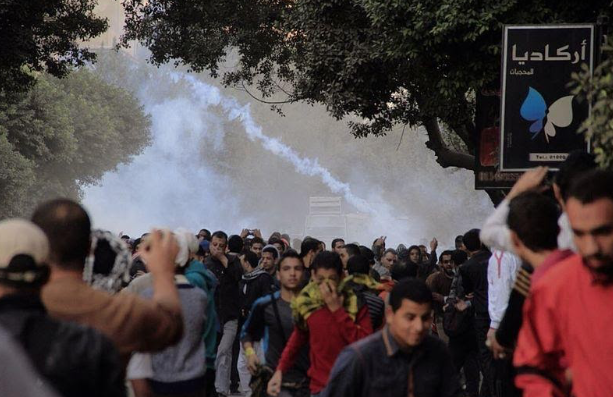 There are many facets of the protests to talk about, but in this article, we will look specifically at the polices use of “non-lethal” weaponry to combat protests. These weapons include tear gas, pepper spray, and “rubber bullets” among other things. While one might assume from the name that the weapons are a safe, albeit painful tool for dismantling protests, they can cause permanent injuries, and even death.

“From top to bottom: rifle of balls (launches rubber balls to long distances), GL-06 with the foldable ballistic helmet visor stock (launches “ping pong” balls softer and to a lesser distance), and a UMP submachine gun (9mm bullets) for roadblocks and raids” by Galazan, Wikimedia

First, “Rubber bullets” is actually a misnomer, as bullets made out of plastic are also frequently referred to as rubber bullets, possibly due to both also being known as “baton rounds.” They first saw use in the 1970s during “the troubles” for use by the British against people in Northern Ireland.[1] While their effects were originally stated to be painful but not leaving lasting injuries, the bullets fired at around 60 meters a second, often at short range, and would cause many injuries and some deaths. In 2013, the British ministry of defense would declassify documents stating that in 1977 they knew the bullets were more dangerous than they had publicly stated,[3] but rubber bullets continued to see use for the duration of the conflict, and still see use around the world to this day. A more recent study shows that out of 1,984 people hit with rubber bullets, 53 died and 300 were left with a permanent disability.[4] 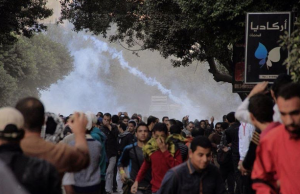 Pepper spray is almost as it sounds, a spray of capsaicin, the chemical commonly found in plants like chilis which makes them taste spicy. It can be measured on the Scoville scale, the scale commonly used to measure how spicy peppers are, and it typically contains between 1.5 to 3 million Scoville heat units, making it at least as host as the hottest type of pepper ever officially documented.[5] Pepper spray is technically a kind of tear gas, or lachrymator (from the Latin word lacrima, meaning tear.) The “gas” part of tear gas is, oddly enough, also a misnomer, as most do not use actual gasses, but instead liquids or solids which “can be finely dispersed in the air through the use of sprays, fog generators, or grenades and shells.” [6] Tear gas is actually banned from use in international warfare in accordance with the Geneva Chemical Weapons Convention, but police forces in many countries still use tear gas to disperse crowds in riots, and some forms of tear gas such as pepper spray are available to the general public. Tear gas used in policing is rarely lethal, deaths typically occur in those with pre-existing conditions restricting their breathing, such as asthma, and most forms of tear gas do not have effects lasting more than a few hours at most. However, tear gas shells when fired from weapons can be lethal or cause vascular injuries, which may cause nerve damage or require amputation. [7] The use of tear gas by police forces is typically heavily criticized by many, typically due to it’s use against peaceful protests, such as what happened in California in 2011 where university police at UC Davis pepper sprayed student protesters who refused to leave. Regarding this incident, the man who weaponized pepper spray Kamran Loghman said, “I have never seen such an inappropriate and improper use of chemical agents.” [8] 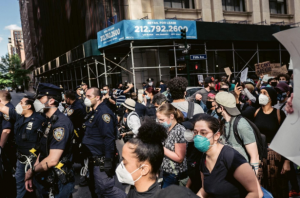 Of course, these are not the only “non-lethal” weapons at the polices’ disposal, just the most apparently contentious in the news now. Police have also been shown using melee weapons such as riot shields, night sticks, or just fists to attack protesters in the ongoing riots in the USA.
Despite all the dangers in protesting, the most dangerous part may be the possibility of contracting the coronavirus due to the large crowds of people in close proximity to one another. And even if you do not contract the virus, if you are injured and need to visit a hospital you may need to visit a hospital which is overcrowded due to the virus. [9] This is not to say that the protests should stop or be put on hold, in Boston, Mayor Walsh has organized the health department to hand out masks to protesters, stating “We believe in people’s right to protest.” But Mayor Walsh also adds “Everything that we’ve been talking about for the last three months here, and keeping our numbers of cases down, and trying to keep people safe didn’t go away yesterday. And I think that it’s important and incumbent upon all of us to continue to remember that.” [10] Sources:
[1] CAIN: Chronology of the Conflict 1970. (n.d.). Cain.Ulster.Ac.Uk. Retrieved June 26, 2020, from https://cain.ulster.ac.uk/othelem/chron/ch70.htm#Aug
[2] Less. (n.d.). Www.Quarryhs.Co.Uk. Retrieved June 26, 2020, from http://www.quarryhs.co.uk/baton.htm
[3] MoD kept bullet dangers “hidden.” (2013, June 11). BBC News. https://www.bbc.com/news/uk-northern-ireland-foyle-west-22848421
[4] Haar, R. J., Iacopino, V., Ranadive, N., Dandu, M., & Weiser, S. D. (2017). Death, injury and disability from kinetic impact projectiles in crowd-control settings: a systematic review. BMJ Open, 7(12). https://doi.org/10.1136/bmjopen-2017-018154
[5] The Official Scoville Scale | Pepperheads For Life. (2014, August 22). Pepperheadsforlife.Com. https://pepperheadsforlife.com/the-scoville-scale/
[6] The Editors of Encyclopedia Britannica. (2018). tear gas | Definition, Effects, & Facts. In Encyclopædia Britannica. https://www.britannica.com/technology/tear-gas
[7] Wani, M. L., Ahangar, A. G., Lone, G. N., Singh, S., Dar, A. M., Bhat, M. A., Ashraf, H. Z., & Irshad, I. (2011). Vascular Injuries Caused by Tear Gas Shells: Surgical Challenge and Outcome. Iranian Journal of Medical Sciences, 36(1), 14–17. https://www.ncbi.nlm.nih.gov/pmc/articles/PMC3559117/
[8] Seelye, K. Q. (2011, November 22). Pepper Spray’s Fallout, From Crowd Control to Mocking Images. The New York Times. https://www.nytimes.com/2011/11/23/us/pepper-sprays-fallout-from-crowd-control-to-mocking-images.html?_r=2&
[9] CNN, M. M. and S. M. (n.d.). Inside a Brooklyn hospital that is overwhelmed with Covid-19 patients and deaths. CNN. Retrieved June 26, 2020, from https://edition.cnn.com/2020/03/30/us/brooklyn-hospital-coronavirus-patients-deaths/index.html
[10] Mayor Walsh Explains Why Protests Were Allowed During Coronavirus Pandemic. (n.d.). Www.Msn.Com. Retrieved June 26, 2020, from https://www.msn.com/en-us/news/us/mayor-walsh-explains-why-protests-were-allowed-during-coronavirus-pandemic/ar-BB14Toq3