How Much Do Presidential Debates Matter?

In the wake of the 2016 US Presidential Election, the widely discussed issue of debates affecting the popularity of the candidates once again became a hot topic. Of course, there are moments in the history of presidential debates that are forever embedded in the minds of the American public, like Richard Nixon appearing pale, nervous and unwell next to a relaxed and confident John Kennedy, or Ronald Reagan deflecting Jimmy Carter’s attacks with a chuckle and by saying “There you go again!”. Despite these memorable moments, statisticians often claim that the effects of debates are negligible on the polling data. However, the polls may fail to take the change of momentum into account.

Some argue that debates do not really matter, as their effect does not really show in polls. “The test is, if a debate is really affecting an election then we ought to be able to see it in the polls. But that just doesn’t happen,” says James Stimson, a political science professor at the University of North Carolina. Karl Rove argues that, “For all the importance attached to presidential debates, they tend to confirm existing trends.” Are they right?

In elections that were particularly close in terms of final result, debates tended to give a little bump to the candidate that finally won. Three relevant examples are the famous 1960 contest between Kennedy and Nixon, the 1980 election between Carter and Reagan and most recently the 2000 match-up between Gore and Bush. In 1960, Kennedy was slightly in the lead before the debates, but polling after the first debate in 1960 showed a change of 2.1% towards the Democratic nominee.

In 1980, Reagan was also leading Carter prior to their only debate, and polling showed a 3.5% swing towards the Republican nominee. In 2000, however, George W. Bush was trailing Al Gore by 2.6% before the debate where Gore kept on sighing and trying to intimidate his opponent using aggressive body language, but polls suggested he was leading after the debates by 0.4%. These were the examples where debates helped the eventual winner by tipping the scale by invoking a bit of change.

However, there are examples against debates influencing final results as well. In 1976, Gerald Ford committed an infamous gaffe about the Soviet Union, claiming that Eastern Bloc countries were not oppressed by the USSR. In fact, they were. Despite the fact that the panel of journalists looked baffled at Ford’s response, polling after the debate suggested that Carter was losing ground to his opponent, significantly, with his 20-point lead melting down to only five. The key factor here is momentum. A candidate may receive positive publicity from the press before the debate, but press coverage might become instantly negative, should a candidate make a gaffe. Ford was gaining on Carter quite rapidly and the press was filled with an infamous Playboy interview Carter gave, but Ford was scrutinized after the debates, and thus Carter’s issues began to fade away. According to Larry Sabato, Ford “arguably stalled his big fall comeback, dooming him to a narrow loss to Carter.”

In 1988, Michael Dukakis was challenging George H.W. Bush for presidency when he faced an unexpected question in the second debate. He was asked if he would be in favor of death penalty if his wife was raped and murdered, and his response was an emotionless discussion of the ineffectiveness of capital punishment. This did not resonate well with the voters, yet statistics show that he did not lose support. According to a 1988 New York Times article, “The ABC News/Washington Post poll, conducted Oct. 12 through Tuesday night, found Mr. Bush ahead by 52 percent to 45 percent among 1,196 likely voters. That was essentially unchanged from a poll released last week.”

The table below features polling results from each election year when televised debates were held. The “Margin before” column shows the results before the first debate of the given year, while the “Margin after” column shows the results after the first debate of the given year. On average, post debate polls show a 4% change in candidate preference, which can be highly significant in case of a tight race. On the other hand, the table does not take third-party candidates such as John Anderson (1980) or Ross Perot (1992) into account, which must be considered when looking at the numbers. 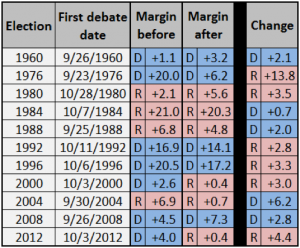 Despite the unorthodox nature of the 2016 elections, it can be argued that debates still have importance. Before the first debate, Donald Trump was close to Hillary Clinton in the polls. The event arguably broke his momentum, and started his fall in the polls. It can be said, though, that the Republican nominee’s scandals about his taxes and an old video where he speaks of women in vulgar terms had a larger effect than the debate. The current President-elect eventually had somewhat better performances in the second and third debates, but the majority of polls still showed Clinton as the winner in all three. In the end, however Trump managed to achieve a victory in the electoral college. Considering the inaccuracy of the major polls (They nearly all showed Clinton achieving a comfortable win both in the popular vote and the electoral college), it can be argued that the polls that showed Clinton outperforming Trump in the debates may have been far from accurate.

All in all, debates do matter if the race is close, as they tend to give a small bump in the polls to the winner. They may change the opinion of a few people, and act as a decisive factor, such as in 1960, 1980, or 2000. If the polls do not show a positive change for the winner, other factors, such as scandals have to be taken into account.