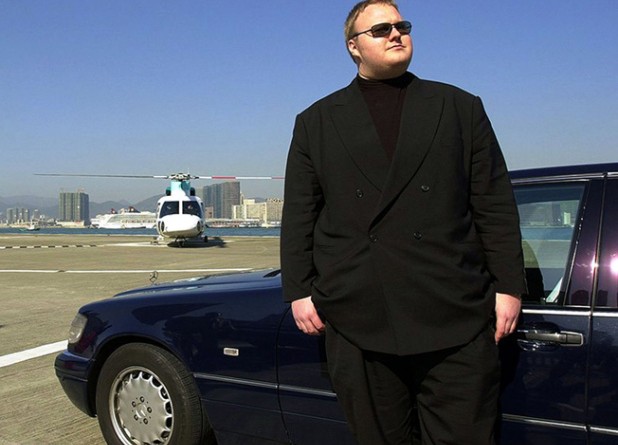 Mansions, luxury cars, and a flamboyant extravagant lifestyle were all well known to internet entrepreneur millionaire Kim Dotcom. That is, before the 20th of January, 2012. On this day Mr. Dotcom was arrested at his home by New Zealand police in response to US charges of copyright infringement relating to his successful website, Megaupload. It has now been a year since the arrest, with the tables seemingly turning in favour of Mr. Dotcom and his associates, who have since day 1 denied the charges against them, and for good reason.

Kim Dotcom (who legally changed his name from Kim Schmitz) is a German born internet tycoon, who has been living in the limelight since the 90’s when he rose to fame. Standing 6’6 and weighing 290lbs, he is literally one of the worlds “largest tech entrepreneurs”. His flamboyant lifestyle including owning a jet, helicopter, several luxury cars, a yacht, and throwing lavish parties have made him stick out in the tech world. Dotcom has a wife, Mona, and 5 children which reside with him in New Zealand.

So, how does a man that has been making millions online since he was a teenager get smacked with a $500 million dollar lawsuit for pirated content, uploaded to his file sharing site, bounce back and have the upper hand in the case? For Dotcom, it seems like a walk in the park. Throughout the entire ordeal Dotcom has said “I will fight this, and I will win”, and 11 months later it seems he just might. From illegal monitoring and searches, to entrapment and illegal warrants, Dotcom has found several inconsistencies in the case against him.

The Megaupload company started by Dotcom trying to send an email to a friend with an attachment that was larger than 25mb, which the mail server would not allow. In turn, he decided he could do something about this problem which many other people face, which was setting up a file storage website. Dotcom describes his company as follows: “Megaupload is a provider of cloud storage services. The company’s primary website, Megaupload.com, offered a popular Internet-based storage platform for customers, who ranged from large businesses to individuals. This storage platform allowed its users to store files in the Internet “cloud” and to use, if needed, online storage space and bandwidth.” With his funding abilities, understanding of internet marketing and entrepreneurship he was able to get 180 million registered users, becoming the 13th most popular site on the web. He spent millions of dollars in lawyer fees making sure the company was in legal compliance with laws, and his attorneys assured him numerous times that it was.

According to the US Department of Justice, on 5th January 2012, indictments were filed in Virginia in the United States against Dotcom and other company executives with crimes related to online piracy, including racketeering, conspiring to commit copyright infringement, and conspiring to commit money laundering. After his arrest on the 20th, he made bail one month later and returned home to his New Zealand mansion after the judge decided he did not pose a flight risk. The United States has been trying to extradite Dotcom to their land so they can put him on trial for the alleged crimes; however it has not been easy. In October it was revealed that US federal prosecutors believe this case “leads to the incredible conclusion that foreign corporations can commit crimes in the United States without risk of being brought to justice here.” These are harsh words to stand behind at a time when the case is slowly falling apart in front of the world.

Everything has been botched from the beginning. Dotcom created a file storage website. A place you could upload pictures, videos or just about anything you wanted backed up online. The thing is, it has been done before, many times just with less success. Dotcom got where he was a year prior because of his skills in internet marketing. Even though his site was set up long after many other popular sites such as mediafire.com, rackspace.com and godaddy.com, it still made it to number one on the list. The US decides to attack Dotcom instead of these alternate sites because of one simple thing: he does not have ties strong enough to a billion dollar company (such as Google) as these other ones do, therefore making it easier for prosecutors to do their jobs. Definitely not fair, but since when are US attorneys supposed to play fair?

In an interview Dotcom has stated: “he is not a criminal; he will win; his website had 180 million registered users, with over 1.5 terabites of information streaming every second; since the amount of traffic and some calculations done by professionals, that it is not feasible for more than even 5% of the traffic to be from illegal media; he is being attacked because of his flamboyance and popularity among the tech world i.e – he is an easy target, so they thought (look again at the other sites which do the same exact task, but are not tinkered with by any federal governments); the searches were illegal, as were the warrants, as was most of the entire raid on his home in New Zealand”

Mr. Dotcom has already shown he is not intimidated by threats from any government, as he is preparing to launch a more secure, faster version of Megaupload on January 20th, exactly one year from his arrest. The new site will feature instant encryption of data uploaded to the site which only the up loader holds the key to. Therefore, not everyone will be able to see data uploaded by other users. Also among new security features Dotcom will very clearly state “not be held responsible for any of the files uploaded to the website from a third party.” He claims the latter was already included in his old websites “fine print”.

“Kim Schmitz. Internet entrepreneur millionaire.  Kimble. Kim Dotcom. Mr. Mega. Kim Tim Jim Vestor. Dr. Evil.” No matter what nickname you prefer to call him by, you have to hand it to him. He has made a name for himself not only because of money but talent, dedication, and a niche for internet entrepreneurship. The case has so many loopholes that nobody knows what the official outcome will be, or even when the actual trial will begin (It’s pushed back week after week, possibly because the prosecutors are having a hard time keeping up with him). One thing is for certain, Kim Dotcom is not your average guy sitting in his grandmother’s basement playing with websites; he is the real deal and you can expect to hear much more about him in the coming years.