McDaniel at the Liszt Academy of Music 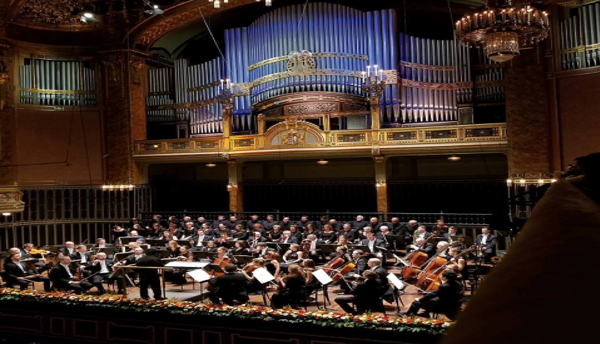 (Photo by Allison Isidore of Yoon Kuk Lee conducting during the symphony.)

A small group of McDaniel students and Dr. Matthew Adamson attended a brilliant rendition of Beethoven’s 9th Symphony at the Liszt Academy of Music in Budapest on September 26.

The group of students and Dr. Adamson met at Bellozzo for dinner before the symphony. Students got to chat and get more acquainted with each other. Dr. Adamson soon started to explain the background of the symphony and of the Liszt Academy. The symphony was reasonably priced, all of the seats were only 3,500 Forints. Walking into the academy, it truly is beautiful artwork on the walls.

Before the initial symphony, conductor Robert Bachmann led the orchestra in The European Anthem, which lasted around three mnutes. Once the anthem concluded, conductor Yoon Kuk Lee appeared on stage and spoke briefly. Lee explained that there were going to be two versions of Beethoven’s 9th Symphony played this night. He explained that the first version would be how the symphony was intended to be played, using a small orchestra, which would give the music a more romantic feeling opposed to how the symphony is usually played. Lee then asked for a moment of silence for those affected by the earthquakes that had just hit Mexico.