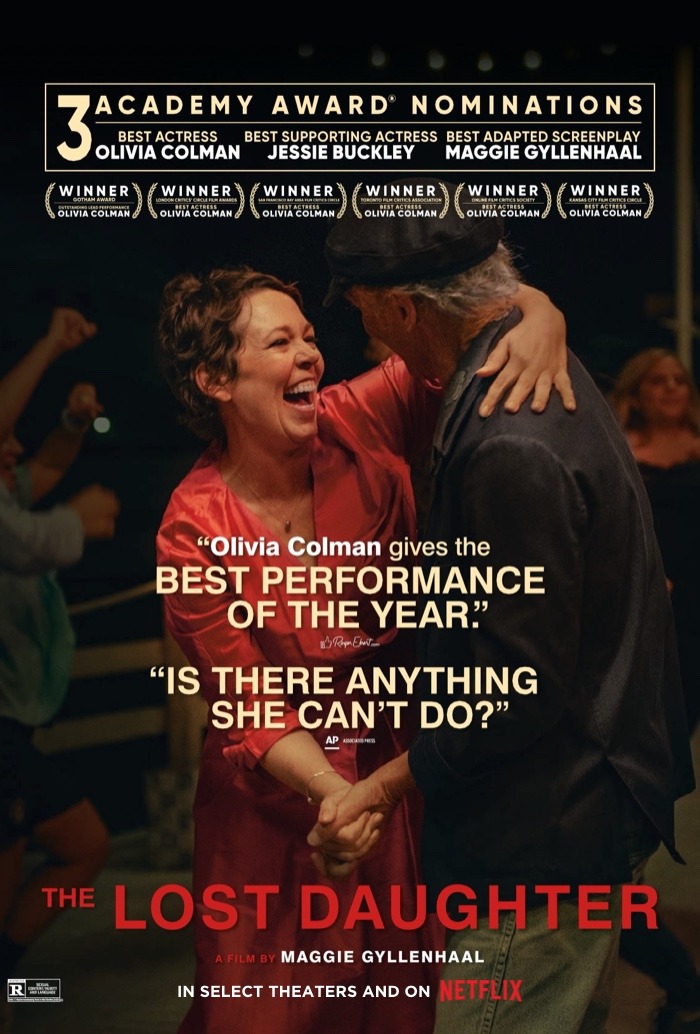 The movie is based on Elena Ferrante’s book and adapted to screen by Maggie Gyllenhaal, making it at the same time her directing debut. She stays for the most part faithful to Ferrante’s original work, with only slight practical adjustments to accommodate the use of English instead of Italian. The author herself, who writes under an alias and was supposedly hard to track down, wanted to be involved in the production. That probably paid off, since the outcome was an Oscar nomination for Best Adapted Screenplay for Gyllenhaal.

The plot circles mainly around a lost doll and the vacation of Leda, a British professor of comparative literature from Harvard played by the magnificent Olivia Colman. She has traveled to enjoy the peace and quiet of a small Greek island but doesn’t seem to get that. The pleasant pastel scenery and color scheme slowly mix together with elements of disgust and cringe. Colman’s acting is subtle but brilliant – it takes a good actress to go beyond the natural to act intentional, ungraspable awkwardness. Her Leda is erratic, unexpected, and hard to pierce. The film’s tactical cuts and atmospheric music composed by Dickon Hinchliffe only increase this ambiguity.

On the island, Leda runs into a Greek American family from New Jersey, with Nina, played by Dakota Johnson, at the center. Observing Nina spins her into a whirlwind of flashbacks and dizziness. They develop kind of an unexpected bond. Johnson’s appearance in the movie is almost unrecognizable but her acting has similar nature to it as we are used to seeing from her, for example in Fifty Shades of Grey. However, her soft voice and slight reservedness fit the role of Nina well.

Another supporting act in the spotlight is the Irish actress Jessie Buckley, also known for another suspenseful Netflix production I’m Thinking of Ending Things. She nicely portrays younger Leda in the flashbacks, simultaneously revealing details about her past and personality, satisfying the audience’s craving for more cues. While talking to the Netflix Film Club, Gyllenhaal mentioned the twenty-year age gap between these two roles as the biggest risk in the script. However, it is a perfect fit: Buckley’s acting compliments that of Colman’s. They even received an Oscar nomination for the same role, Colman for the Best Leading Actress and Buckley for the Best Supporting Actress.

In the movie, the women and girls are also entangled. The first indicator of that is the characters’ names: Leda with a doll named Mina, and Nina with a daughter named Elena. There is something similar in all of them, a sort of untamedness, which is the key to the heart of the story. Ferrante, Gyllenhaal, and their team are brave enough to have a fresh take on mother-daughter relationships, women’s role in the family, and being an “unnatural mother”, as Leda puts it. They expose the possibility, almost fear, of being unwilling to lose oneself to motherhood and sacrifice other parts of life for your children.

Despite the silent connection between the women, intimacy is a tricky theme in the movie. Every conversation seems to have breakage in it, and especially relationships with men are left on the sidelines. Men come and go in the movie; they don’t remain in the center. Still, the production has some mention-worthy male performances, including Ed Harris as a housekeeper Lyle or Gyllenhaal’s own husband Peter Sarsgaard who plays professor Hardy from Leda’s younger days.

In the original novel, where Leda is a professor of English literature from Naples, there is a storyline around Neapolitan crime that is completely missing from the movie. While the film does include some references to danger, this aspect isn’t fully utilized and falls flat, merely confusing the viewer. There is also something about the film, that despite being suspenseful, it doesn’t hold the viewer in very well.

The audience response hasn’t been all praises, which might also be due to a slow build-up or difficulties in figuring out the characters. Furthermore, the theme is complex, and the film doesn’t provide any help or resolution to it. It doesn’t carry you into the moral of the story but leaves you hanging and makes you do the work. However, it is refreshing to see women in the roles of unnatural parents, without placing any judgment, and through characters that are carefully crafted to be both likable and off-putting. The ending of the movie is satisfying and confusing, making sure you are left with a looming discomfort to wonder about days later.