Lamar Odom: so much more than a Kardashian

For the past few days, the US media has been constantly updating on the condition of former NBA superstar Lamar Odom, who woke up last week after being in a coma for three days. Lamar fell unconscious on the night of October 13 in a brothel near Crystal, Nevada, where he was later discovered to have taken a large dose of drugs and what is claimed to be “herbal Viagra”. For the past few days his ex-teammates, family, friends, and even fans have been on edge waiting to hear the news that he will be fine once again. Initially, doctors officially declared him to be in critical condition and gave him a 50-50 percent chance of survival. Since then, Lamar has woken up and he has even been able to walk around on his own for a bit.

More often than not, when a person ends up unconscious after taking a series of drugs, there is a traumatic background story as to how they got to that point. That is no different in the case of Lamar Odom. Lamar Joseph Odom was born on November 6, 1979, in South Jamaica, Queens, NY. His upbringing was nothing short of tragic, as not only was his father a heroin addict for much of Lamar’s childhood life, but he also lost his mother at the tender age of 12 to colon cancer. Through all the adversity Lamar decided instead of folding he would try to prosper. He went on to play his high school ball at St.Thomas Aquinas High School in New Britain, Connecticut. While there he was coached by the famous Jerry DeGregorio and ended up winning the “Parade Player of the Year” award in 1997, his senior year. He had contemplated on entering the NBA straight out of High School, but ultimately opted to enroll himself at the University of Las Vegas-Nevada (UNLV). Events took an unexpected turn when he was released by the school, before he could even play a single game, for “cheating” on his standardized college test. He then ultimately played his lone college season at the

University of Rhode Island, where he excelled and entered the NBA in 1999. He was drafted by the LA Clippers with the 4th overall pick. Throughout his NBA career he has played for four different teams (LA Clippers, Miami Heat, LA Lakers and Dallas Mavericks). Undoubtedly, the most memorable period of his up and down career was the seven-year period he spent with the Los Angeles Lakers playing alongside Kobe Bryant. Lamar won two championships with the Lakers in 2009 and 2010, and in 2011 was named the NBA’s Sixth Man of the Year award, which is given to the best player that comes off the bench.

In spite of his achievements in basketball, it is perhaps his life off the court that people identify him with, which is such a shame. Apart from the above mentioned issues Lamar had to deal with, he also lost his then six-month-old daughter in 2006 to sudden Infant Death Syndrome (SIDS). It took Lamar a good few months to recover from the trauma, but eventually he did recover. Shortly after, he met his wife to be, Khloe Kardashian, who some would say was the ultimate cause of his downfall. In September 2009, after a whole month of dating, the two decided to tie the knot and get married. Lamar had already been a fixture in the reality hit TV show titled “Keeping up with the Kardashians”, and then had his own show with Khloe titled “Khloe & Lamar”. Some suspected after months of tension between the newlyweds that Lamar had started to abuse drugs again, in August 2013. He was then immediately suspended by the NBA for violating their non-drug use policy and a few months later in December Khloe officially filed for divorce. The two-year long divorce settlement seemed to be dragging on for ages and it was visibly hurting Lamar both physically and emotionally. Finally, in 2015 the divorce papers were finally signed by both sides. However, Khloe never officially dropped using his name, as she is still known as Khloe Kardashian Odom, even till this day. In fact, the most recent news outlets have been reporting that Khloe has been at Lamar’s bedside from the day he was hospitalized. Various reports are confirming that not only is Lamar able to walk on his own now, but he was transferred to a different hospital in Los Angeles. Most importantly however, is the news of the divorce being called off, Khloe is quoted as saying “we will give marriage another shot”. The question is given Lamar being in the condition that he’s in, could he have made his own decision regarding the divorce? 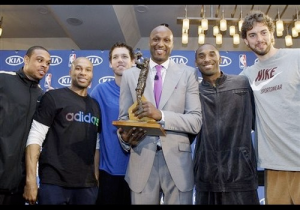 As a longtime fan of Lamar Odom, it sickens me to my stomach to hear these reports about him. While Lamar lies on his hospital bed, the media has the unmitigated gall to identify him as “ex-husband of Khloe Kardashian” or “Ex-reality star”. Lamar Odom is far greater than the Kardashians can ever be, and has overcome far greater obstacles in life than you and I ever will. Lamar Odom to me will always remain the 6’10’’ lefty with a soft touch, whom was destined to be one of the greats in the world of basketball. Here’s to hoping that he will live long enough and get a second chance from life to tell his story! #PrayForLamar