A Hungarian sanctuary for bears

An hour’s journey from Budapest’s city center can bring you face-to-face with the one of the continent’s largest mammals, the Eurasian Brown Bear. At Medveotthon, or ‘Bear Home’, visitors can interact with the roughly 40 rehabilitated bears that live in this peaceful slice of the Hungarian countryside. The grounds, which include a forest, a meadow, a large pond, and many dens, comprise an idyllic natural habit for the animals. Beloved by young visitors and animal lovers of all ages, the wildlife safe-haven allows close yet safe interaction between visitors and the denizens of the park. Through the chain-link fence that surrounds the perimeter of the sanctuary’s large enclosure, guests can serve honey on large wooden spoons to the ursine residents of the park.
Medveotthon can be reached by a 40-minute drive or an hour of public transit from Budapest’s center. Located near the village of Veresegyház, the sanctuary is accessible via frequent trains departing from Nyugati Páyaudvar (Western Railway Station), one of the city’s main transit hubs. From the Veresegyház train station, Medveotthon is a 20 minute walk, which is well-marked by signs. Entry costs 500 Hungarian Forints, and 300 Forints are charged for parking. Additionally, each container of honey costs an additional 500 forints, which are available at the shop and restaurant operated on the sanctuary’s grounds. The low cost of the activity goes to a good cause, directly funding the costly living expenses of the bears, including food, veterinary care, and rehabilitation.
While the bear’s peaceful existence on Medveotthon’s grounds is enviably tranquil, most of the residents come from troubled backgrounds. Medveotthon is an active rescue and rehabilitation organization, and a majority of the bears were involved in circus, film, and roadside attraction performances, where they were mistreated to varying degrees. The large rectangular design of the space allows the bears to choose whether to interact with or avoid visitors. Some of the sanctuary’s bears are accustomed to and enjoy human contact, while others clearly maintain the emotional and physical scars of past abuse, and prefer privacy. Detractors may argue that feeding honey to the bears is an unnatural interaction between humans and wild animals, but the residents of Medveotthon are already domesticated and long-since adjusted to human contact. 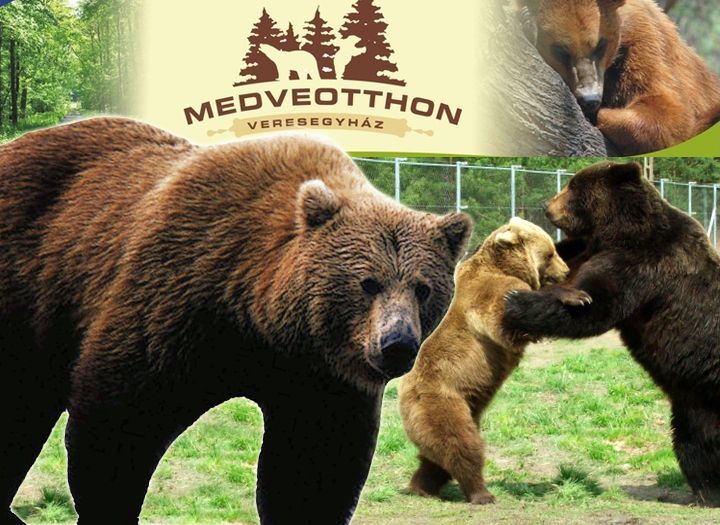 In addition to bears, Medveotthon hosts a wolf pack, several ostriches, and a variety of small mammals in separate enclosures. The wolves’ enclosure is more densely forested than that of the bears, and interaction with them is a bit more removed. Still, there are few other places where you can hear the howl of wolves in a natural environment, and see a wolf pack weave in and out of the tree line a few meters from where you stand.
Despite being slightly out-of-the-way, Medveotthon is a great destination for residents and tourists alike. The organization is making a tremendous difference in the lives of many large, misunderstood, and mistreated animals from around Central Europe. Guests can uniquely interact with the sanctuary’s bears in a way that would be impossible in most zoos. The closer contact permissible at Medveotthon allows for an empathetic perspective towards these often misjudged animals. A trip to Hungary’s bear sanctuary makes for a great afternoon outing, and supports an important animal protection organization.