The Hungarian government started an informational action on child protection as there will be a referendum called by FIDESZ, the ruling party, on the day of the parliamentary elections, April 3, 2022. 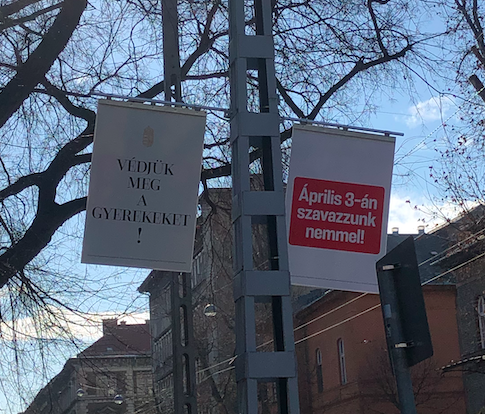 Why do politicians think that Hungarians need this referendum? Here is just a glimpse of the background: A new children’s storybook “Fairytales are for Everyone” was released in 2020 in the country. It is a collection of different folk tales which are re-told from the point of view of ethnic and other social minorities. The main characters are all from disadvantaged backgrounds for example from abusive households, from the LGBTQ+ community, but there are Romani people and adopted children among them as well. The book is very controversial in some politicians’ views. On September 25, 2020, Dóra Dúró a member of the parliament stated in a YouTube video that this is considered “homosexual propaganda” and then shredded the pages off the book. However, this only made sales increase and the collection became a bestseller on Book24. In October, the same year, Mi Hazánk Mozgalom (the national radical, far-right party) started a protest in front of Labrisz Leszbikus Egyesület (the first lesbian organization in Hungary) to ban the book. Dúró believes that sexuality isn’t just hereditary, but the environment and bringing up also play roles in its forming. However, science says otherwise, there is no substantial evidence that suggests parenting or early childhood experiences influence sexual orientation, they do not view sexual orientation as a choice. Viktor Orbán stated in an interview with Kossuth Radio that “Hungary is very tolerant with homosexuality; the country is very patient. However, there is a red line that can’t be crossed, and I will state my opinion: leave our children alone!” Even though, once again, there is no scientific base that children will suddenly turn gay after reading fairytales.

Shortly afterward, on June 8, Members (MPs) from the ruling Fidesz party had proposed amendments, which were eventually included in the final version of the law, which was ruled out on June 15, 2021, by the Hungarian Parliament: Act LXXIX of 2021 on ‘tougher action against pedophile offenders and amending certain laws to protect children. This law bans exposure of content to children about homosexuality and gender reassignment. Moreover, this law modifies existing legislation on national public education, prohibiting homosexuality and gender reassignment from being ‘promoted’ in sex education classes. Furthermore, if businesses advertise with LGBTQ+ people, they must rate their ads as Category V which means that the content is not recommended for minors, and only can be shown after 11 pm. It doesn’t seem like the government is trying to “save children” from being “exposed” but these kinds of laws are used to silence LGBTQ+ people. There are so many things children really need to be protected from such as abusive caretakers, poverty, bullying in schools (UNICEF’s research said 25% of kids in schools are bullied), we should vote on these, and teach the kids to accept each other. To sum it up this law appears to mix homosexuality and pedophilia and is modeled after the Russian law of banning “gay propaganda” in front of minors.

The next step of targeting the LGBTQ+ community is the referendum. The promotion of it started the traditional way with posters all over the city.  You can read on them the call „Védjük meg a gyerekeket! Április 3-án szavazzunk nemmel!” which means “Protect the children! On April 3, vote no!”.  The government believes only the parents should have the right to discuss sex with their children, and not activist groups. They also stated that other European countries did not ask their citizens, and just implemented the law, however, here in Hungary the government wants to give the right to the people to vote. This is ironic because they are still bombarding people in a manipulative way to vote in the referendum.

These questions will be on the voting sheet:

“Do you support the teaching of sexual orientation to minors in public education institutions without parental consent?”

“Do you support the promotion of sex reassignment therapy for underage children?”

“Do you support the unrestricted exposure of underage children to sexually explicit media content that may affect their development?”

“Do you support the showing of sex-change media content to minors?”

There was supposed to be a fifth question “Do you support the availability of non-conversion treatments for minors?” However, this one was called off by the Supreme Court of Hungary, and even though the Constitutional Court overturned the decision in December, following a complaint by the government, FIDESZ did not want to reopen the question. As Prime Minister Viktor Orbán said at the cabinet meeting before Christmas, he is content with the four questions. He believes that this referendum is needed because “Brussels is calling for amendments to the education act and child protection rules. Here, however, it is not possible what has been a law in Western-Europe”.

The government expects the referendum to strengthen the already adopted but widely criticized law and mobilize its supporters. But this law does not protect children, a lot of them are not able to speak to their families about their sexual orientation, and if this referendum is passed, they will not be able to speak about it in school which is supposed to be a safe space for them. If this law is implemented, it can do more harm to children than good. That is the reason why domestic rights groups, including the Hungarian Helsinki Committee and Társaság a Szabadságjogokért (Society for Civil Rights), issued a joint appeal to the public in January, urging people to vote against the law in the referendum. The easiest way to do this is to tick both the Yes and No boxes on the ballot paper for each referendum question. “Invalid questions must be answered with an invalid answer. Every invalid vote helps to ensure that the government’s ex-communication referendum does not reach the validity limit. Let’s prove once again that Hungarians want to live in an accepting society and reject the government’s exclusionary and hateful policies,” said Dávid Vig, Director of Amnesty International Hungary in an interview with Szabad Európa (Free Europe).