A Human we can be Proud of!

Elon Musk, the CEO of Tesla, Inc. is a man that is saving humanity’s “face” in these dark times. Dictatorship in N. Korea, terrorist activity in Europe, war in the Middle East, Coups and wars in Africa, South America in turmoil, and the U.S. with their political mayhem around President Trump; Elon Musk finally brings a positive topic to talk about, someone who is using their money and power for the bettering of our time and taking matters into his own hands without hesitating or asking others.

Elon Musk is mostly known for being the CEO of Tesla, but he is much more than that. Elon, a Canadian born in South Africa is an entrepreneur, investor, engineer as well as an inventor. He is the founder, CEO, and lead designer of SpaceX; co-founder, CEO, and product architect of Tesla, Inc.; co-founder, and CEO of Neuralink; chairman of SolarCity; co-chairman of OpenAI, and finally, founder of a private company called “The Boring Company”. In December 2016, he was ranked 21st on the Forbes list of The World’s Most Powerful People. As of February 2018, he has a net worth of $20.1 billion and is listed by Forbes as the 53rd richest person in the world. 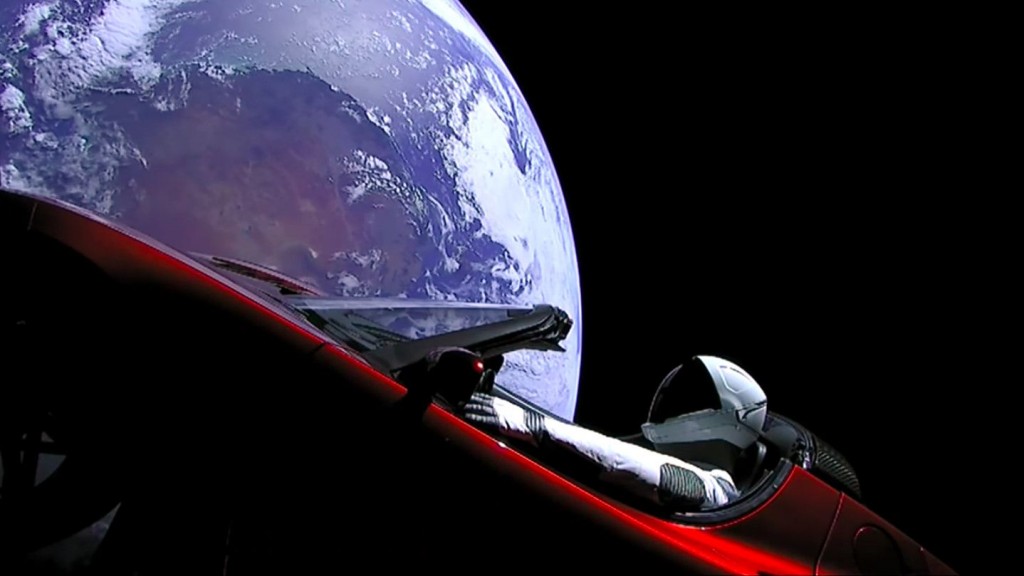 Four companies have been mentioned, but only two are somewhat famous. Tesla has made a lot of noise in November 16, 2017, unveiling the fastest electric car (the Tesla Roadster 2020 prototype) which was shown as a surprise reveal at the show where the main event was the reveal of the Semi, the first electric truck. 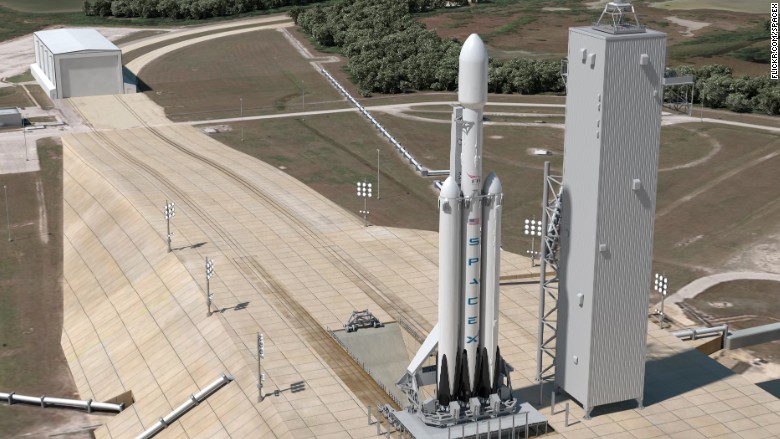 SpaceX has been showing up in news in the last 6 months, the biggest news was the recent launch of the Falcon Heavy rocket. Falcon Heavy has been branded as the world’s most powerful rocket, it was launched from Cape Canaveral, Florida, U.S.A. The rocket successfully reached orbit, and two of the rocket’s three reusable cores were recovered; the outer boosters broke away mid-flight (as planned) and landed smoothly on their designated landing pads, the center booster, however, failed to reach SpaceX’s floating drone ship during its landing attempt. The rocket’s unusual payload survived the launch and began its journey Elon Musk’s Tesla Roadster is in route toward its final orbit around the sun. The falcon heavy has been hyped because of its big size and small cost, it’ll be capable of carrying cargo that most other modern rockets can’t: huge satellites, space telescopes, or habitats for space stations. The flights will be cheap, relatively speaking, they will cost starting $90 million which is 9% of NASA’s upcoming Space Launch System which will cost around $1 Billion per launch. The Falcon Heavy rocket could end up playing a role in sending people back to the moon (since the main reason why it was not done again was because of the amount of money needed to do so) or in future missions, to Mars. Now that the Falcon Heavy test is seemingly a success, SpaceX can focus on the next two Falcon Heave missions scheduled for later this year.

Neuralink is a rather new company, publicly reported in March 2017, it has been reported to be developing implantable brain-computer interfaces. Elon Musk stated that the company’s short term goal is to make devices to treat serious brain diseases and their long term plan is human enhancement.

SolarCity Corporation specializes in solar energy services, it markets, manufactures and installs residential and commercial solar panels in the US. The Company is actually a subsidiary of Tesla, Inc. they merged in 2016 and it now offers energy storage services through Tesla’s “Powerwall” (rechargeable lithium-ion battery stationary energy storage). The company, in partnership with Panasonic, operates the “Tesla Gigafactory 2” in Buffalo, New York, where it manufactures solar module components. 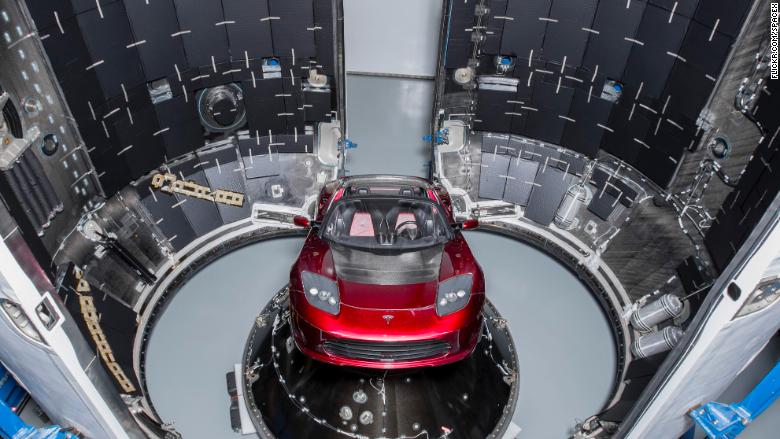 OpenAI, the last company on the list, is a non-profit artificial intelligence (AI) research company that aims to promote and develop friendly AI in such a way as to benefit humanity as a whole. The organization aims to “freely collaborate” with other institutions and researchers by making its patents and research open to the public.

Most interesting of all is The Boring Company, the company is an infrastructure and tunnel construction company, pretty boring right? Hence the name. Elon was annoyed with the current state of 2-D transportation in Los Angeles and decided to do something about it. They are currently working on both coasts of the US. Los Angeles has a 2-mile (3.2km) tunnel under construction and Baltimore a 12.4-mile (20km) electric-sled dual-bore tunnel slated to begin early 2018. This is not the reason why this particular company is the most interesting. Elon Musk’s company (which is more of a hobby) began interacting with customers by offering 50,000 hats and once those sold out in January 2018, it began offering 20,000 flamethrowers for preordering. The Boring Company’s flamethrower is a blow torch shaped to look like a gun and it is legal to use in all U.S. states except for Maryland. The sale of the flamethrower has attracted criticism, with politician Miguel Santiago seeking to introduce legislation that would ban sales of the device in California. In just a few days, all 20,000 flamethrowers were sold out, but after customs official said that they would not allow any items called ‘flamethrowers’, Elon Musk announced on Twitter that he would rename them either “Temperature Enhancement Devices” or “Not a Flamethrower” and that all flamethrowers will ship with a fire extinguisher included. He settled on “Not a Flamethrower” and subsequently updated the Boring Company website where it also states that it is the “world’s safest flamethrower”. Musk also announced separate sales of the Boring Company Fire Extinguisher, which he described as “overpriced… but this one comes with a cool sticker” 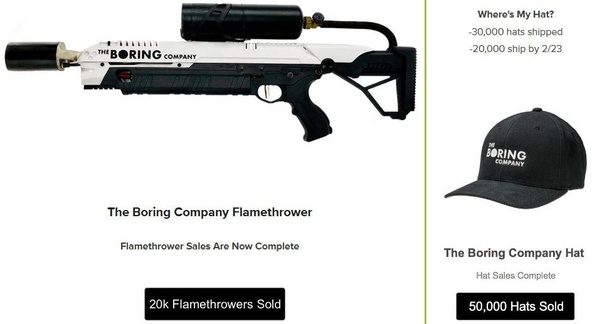 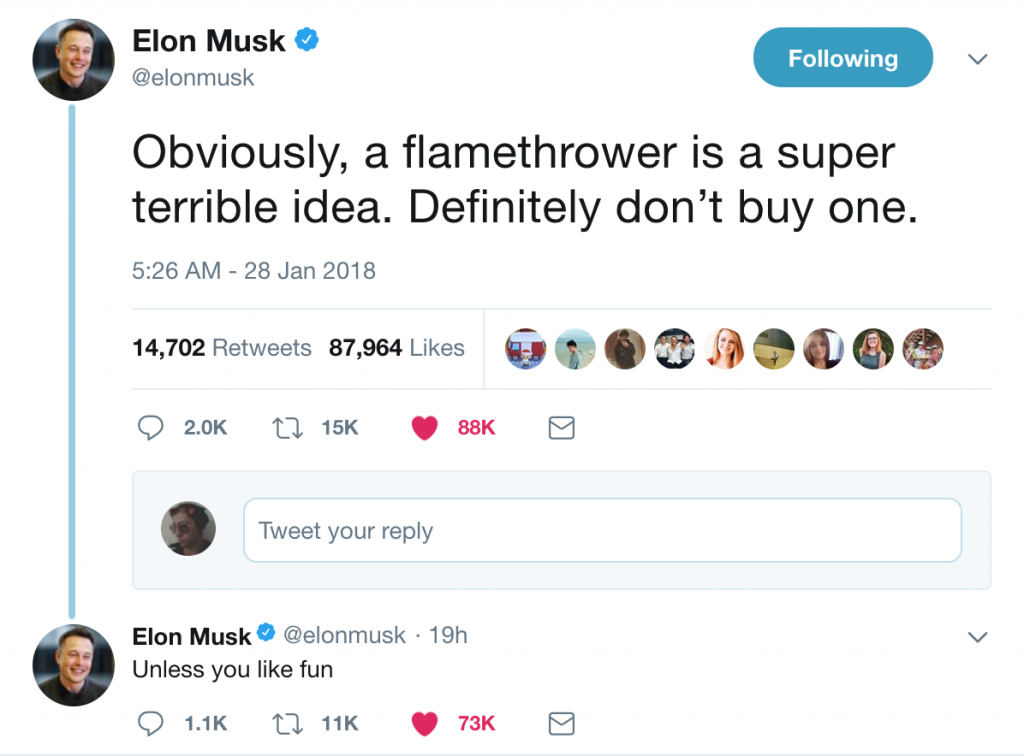 Electric cars, revolutionary space travel, solar energy, safe AI, now these are the topics which should be discussed and pushed forward, there is too much evil in this world, Elon makes it a bit easier to live with it and look forward to the future and see what else it brings. His humor is never-ending and his boring company is the proof of it. Many look forward to his future endeavors and wish him luck and success for he is one of the rare ones which have a good heart with the money to express it.