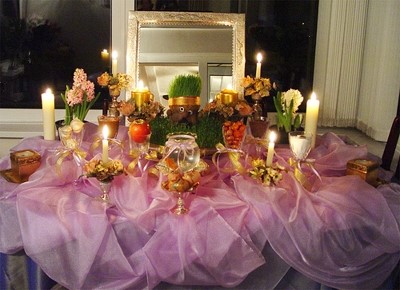 By Nazgol Rezapours
Historians observe that with its 1,700 years of history Iran is one of the oldest and most cultural countries in the Middle East. The historical heavyweights such as Greece, Cyprus, India, Iran and so on, celebrate very special days or events on their calendars that continue to be observed and passed down carefully from generation to generation.
One such special event in the Persian Solar calendar is NoeRooz, which in fact is the Persian New Year. The word “NoeRooz” is made up of two terms: Noe which means new and Rooz that means Day. You can find this word written in various ways, which all have the same meanings, for instance: NoRooz, NowRooz, NuRooz, etc. The roots of Persian New Year refer to 1,700 years ago, when Iran’s ruler was Kourosh Kabir (Cyrus the Great), and its original religion was sun worship. Subsequently, the solar calendar, which starts on the first day of the spring on March 21 (as in 2015) or March 22, came into being. The solar calendar comprises one year from the time when the earth starts orbiting the sun, and the exact 365 days, after which the year will finish and a new one will commence. It includes the 12 months, of which the first six months of the year are all 31 days and the other 6 months are 30 days long. 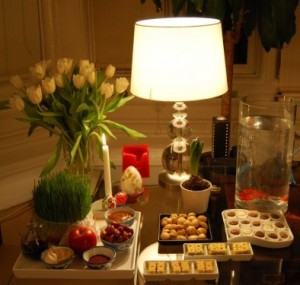 Iranians celebrate their New Year with some very old customs and traditions that today include decorating a Haft Sin table, which means a table full of seven Ss. They put some special items on their tables, each of which has its own historical meaning and they all are start with the S letter in Farsi.
These special things are:
1-seke which is a coin for bringing the financial prosperity in the New Year
2-sir which is garlic and it is there to symbolize medicine and healthiness
3-sabze (wheat, lentil) sprouts growing in a dish, symbolizing rebirth
4-somagh (sumac) berries, symbolizing (the color of) sunrise
5-samanoo a sweet pudding made from wheat germ, symbolizing affluence
6-sonbol the fragrant hyacinth flower (the coming of spring)
7-senjed the dried fruit of the oleaster tree – symbolizing love
And next to these seven items, they also put a Quran for God’s attention and God’s love in their New Year or some families put Hafez’s book of poems, as well as colorful, decorated eggs, one for each member of the family and fertility, a mirror for self reflection and introspection and also a bowl with goldfish for life, and the sign of Pisces which the sun is leaving.
The Persian New Year comes at a different time every year; one year it may start in the middle of the night or another year in the afternoon, so Persian families will come together around this table, wearing their new clothes and pray for a wonderful year full of love, luck, wealth and health. Then after the New Year commences, the family members kiss each other, say happy New Year to each other and the eldest members of the family give the new money to the youngest ones from inside the Quran.
In Hungary, the Persian population of Budapest is estimated around 3,000 and each year they celebrate Persian New Year together in small gatherings while some are lucky enough to celebrate with their families. Once in a while Persian groups invest in a big Persian New Year and invite all of the local Persian population, so all the Iranians have the chance to go there, meet each other, dance to Persian music and say Happy New Year to each others to feel as if at home.
I wish all Iranians a wonderful year full of joy, happiness, luck and wealth from the first day to the last days of these 365 days.