Chinese New Year, one of the most important days in China and one which is steeped in ancient tradition, is a day of family reunions for all Chinese people wherever they may be. Since China follows the lunar calendar, this year Chinese New Year falls on February 8.

Chinese New Year, which is also referred to as the Spring Festival (in Chinese we call it Nian or Chun Jie), has a long history that can be traced back to the Shang Dynasty, when people worshipped the gods and their ancestors. Ever since the Han dynasty (206 BC-220 AD), this festival has been a national holiday. In China, during the Spring Festival you will hear firecrackers loud enough to wake the dead and the reason why can be traced back to a story.

According to legend, there was a mountain where a monster named Nian lived and on the last day of the year, the monster would come to the village to eat people. So on that day the villagers would hide from Nian. One day, Nian came and saw a child was setting off firecrackers. When Nian tried to get close to the child, the deafening noise of firecrackers sounded endlessly. Nian jumped in fright and was startled by the sound of the firecrackers, which scared off the beast and it ran back to the mountains. Therefore, the villagers found that Nian feared firecrackers so every year when Nian came to the village, people used firecrackers to scare Nian away. Finally, Nian died on the mountain. Although Nian was dead, people still kept this convention to celebrate the Spring Festival. 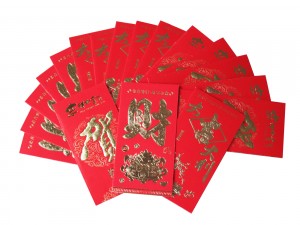 During Chinese New Year, Chinese people visit their relatives. The adults (at least those with a stable income) will give younger ones a red packet; a red envelope into which adults put money. The amount of money always begins with eight or six, such as 60 or 80 RMB, as this represents the best wish for their children. Eight in Chinese is Ba and is pronounced to Fa, which means rice. Six in Chinese is Liu, which is pronounced similar to Shun Liu lit. smooth-going.

In the evening, families have dinner together and they eat dumplings because they look like shoe-shaped gold ingots, which convey the wish that you will get lots of money in the year ahead.

Even when they have emigrated to other countries, Chinese people are not always able to keep all their traditions, such as setting off firecrackers, but they have adapted traditions and have dinner together with their relatives and friends on New Year’s Eve. During this dinner they share dumplings and give the red packets to the younger ones.