Hamburg, the pearl of the North A guide to a perfect weekend in the bridge city

Hamburg, Germany’s Pearl of the North and the second largest German speaking city, is a tourist magnet and always worth a weekend trip or longer. In the following article I’ll show you why the Bridge City should definitely be on top of everyone’s travel bucket list.

Hamburg has something for everyone; rich and versatile cuisine, hipster/student bars, a vibrant nightlife and lots of sights to see. The only thing not to expect in Hamburg is good weather, so pack your rain poncho! Nevertheless, the city (that has over 4,500 bridges, more than Venice, Amsterdam and London combined) really shows its charm in the typical Hanseatic rain. From Budapest you can hop on a daily and direct flight to Hamburg with Eurowings with prices starting at HUF 33000.

Following your arrival, start off your day relaxed by getting a freshly brewed Pilsner and a fish roll down at the “Landungsbrücken”, from there you have an absolutely stunning view over the harbour and can watch the ships from all over the world come into Hamburg. After you have enjoyed this traditional North-German meal, you can walk through the old “Elbe Tunnel”, the 1911 opened 426 metre tunnel which lays 24 metres below the river used to connect both sides of the city. Today, it is a famous tourist attraction and only open for pedestrians and allows you after reaching the other side of the tunnel a stunning panorama view over Hamburg. From there, you will also see Hamburg’s newest sight, the “Elbphilamony”(https://www.elbphilharmonie.de/de), a 110-metre-tall Opera house with two concert halls, a five-star hotel and various restaurants and a 360-degree panoramic view. The “Elbphilamony” is already in the heart of your next stop, the “HafenCity” and the “Speicherstadt”. The “Hafencity” is one of the largest developments of urban areas near the water and aims to create living space for over 12,000 people by 2025. Nevertheless, most of it is already finished and invites you to go shopping or dine, or just stroll through the narrow streets and enjoy the modern architecture which makes you feel like you are walking through the future of urban housing. Following the stroll through the “Hafencity” you will end up at the “Speicherstadt”, the World Heritage Site that used to be Warehouses from 1888 and are an absolute must-see when in Hamburg. In addition, the Speicherstadt is also home to the world’s largest miniature model railway, the “Miniatur Wunderland” (https://www.miniatur-wunderland.com/). It is a massive, detailed railway model which stretches over 7000 square metres and futures nine theme worlds, including the United States, Germany, Italy and Scandinavia as well as a fully functioning airport. On your second day, you can visit the “Jungfernstieg”, Hamburg’s shopping mile and home to the most expensive Hotels the city can offer. Located directly next to the “Alster”, the second river, which runs through Hamburg, it invites you to stroll along the various shops and offers a large variety of restaurants and café to relax and let the day go by as well as visiting the famous municipality building. 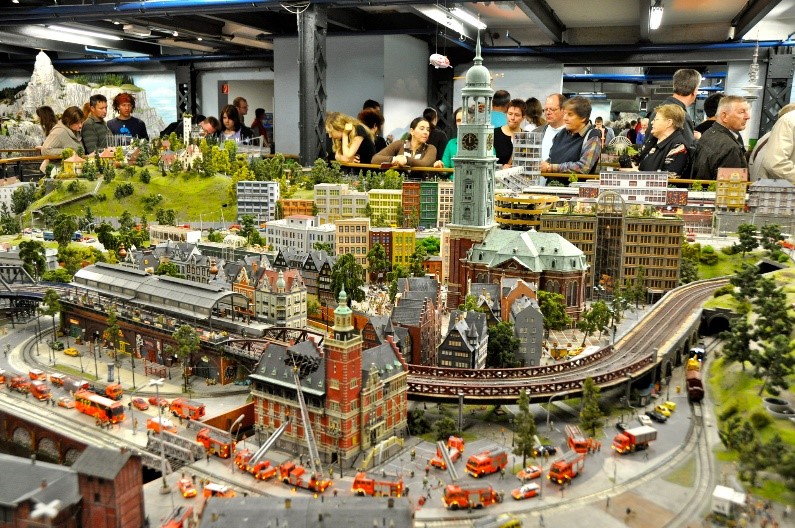 For your evening entertainment and dinner plans, your best bets are the “Sternschanze” and the “Reeperbahn”. The “Sternschanze” is located right next to the “Reeperbahn” and is Hamburg’s hipster and leftist district with lots of small little shops as well as one of the best pubs and restaurants the city has to offer. The “Reeperbahn” on the other side is mostly famous for the largest red-light district in Europe and vibrant night life with lots of bars, pubs and nightclubs and home to the concert hall where the Beatles had their first concert outside of the UK. Next to the “Reeperbahn” is also the “Hamburg Dom”, a large amusement park. Another must do is the traditional Hamburg after-party-dinner. Unlike other cities like Budapest, the locals head down to the harbour in the early morning hours to get themselves freshly caught fish from the north-sea in a bread roll. It is an absolute must do and absolutely worth it, forget your Kebab or McDonalds after partying, a fresh fish roll is the way to go in Hamburg! Furthermore, Hamburg is the musical and theatre capital of Germany and has tons of museums and art exhibitions as well as being the home to two football teams, so it offers something for everyone!

So, pack your bags, especially your rain poncho and book your ticket because you have not lived until you had a fresh fish bread roll at five in the morning!