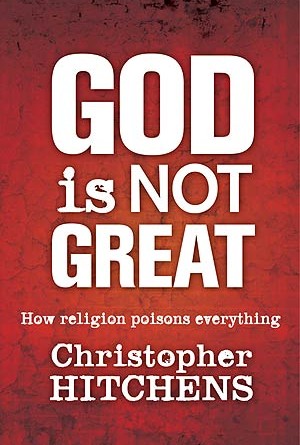 In his book, “god is not great”, prolific writer on religion, Christopher Hitchens argues the point and explores (as the book sub heading suggests) “how religion poisons everything”. Comical and merciless, Hitchens destroys the concept of a personal god.

Hitchens is well versed in many religious texts of the largest faiths in the world, and even some small obscure cults (such as the cargo cults of East Asia). It seems that he has studied so many faiths without the intention of criticising them, that his vast knowledge on religion makes him their best critic.

In his book, Hitchens explores different arguments by “theists” meant to prove the existence of god, he then proceeds to dismantle them one word at a time. exploring the philosophical incompatibility of the arguments made by the religious. Hitchens elaborately shows how those arguments are non-sensical, but he does not stop there. He then attempts  (successfully I might add) to show how not only are religions beyond a doubt “man-made”, but that they are also morally reprehensible and damaging to world progress. As Bertrand Russell once said “I say quite deliberately that the Christian religion, as organised in its Churches, has been and still is the principal enemy of moral progress in the world.” Hitchens expands that claim to encompass all world religions.

He gives incredible detail on many religions and their adopted theology, he uses the arguments made by the religious to prove his point, that not only are religions manipulating people, but also bankrupts morality. As a blurb on the cover of the book states “one admires the genuine morale outrage.”

I have selected a passage from the book which I believe contains the most important and basic points that are made over and over again throughout the entire book:

“Violent, irrational, intolerant, allied to racism and tribalism and bigotry, invested in ignorance and hostile to free inquiry, contemptuous of women and coercive of children: organised religion ought to have a great deal on its conscience.” With that in mind, I now try as best I can to recreate Hitchens’ lucid arguments against the destructive power of religion.

One of his basic arguments, which is one that has been repeated over time, is that with or without religion good people do good things and bad people do bad things, but it takes religion to make someone good do something evil. He uses the example of Abraham’s willingness to sacrifice his own child because a voice has told him to do so. This kind of behaviour would receive only criticism, but with divine sanction, anything is allowed.

He also uses biology to prove that we were not designed by a creator. He argues that if we were designed as humans, we would be physiologically efficient, yet most of our DNA is “junk”, vestiges of a lowly beginning, we have appendixes which are basically useless now and vestigial tails. All of this points to a slow evolution.

Lastly, he uses religious texts against religion. He cites Mathew 15:21-28, where Jesus at first refuses to perform an exorcism on a Canaanite woman because she was not Jewish, showing that even Jesus had some intolerant inclinations. He also cites researchers who have correctly pointed out that the Quran and Islamic tradition is nothing more than a hodgepodge of Jewish, Christian, Persian and Greek sayings, maxims and philosophies, amalgamated into one religious text claimed to be the divine word of god. And the divine word of god in the Quran is completely contradictory to other divine revelations from god in the Quran, hard to imagine how god could have made such a silly mistake, a mistake that even a college student would get scolded for, and an inconsistency that would make even Romney blush.