Kratos returns a lot older and calmer, but still unexpectedly brutal in a family drama that takes place in Midgard. God of War 4 is an action-adventure, third-person POV, few elements reminded me of dungeon crawler games. The main storyline takes 30+ hours to complete, if you are a trophy hunter or just would like to be sunk into Midgard and the other realms it would take 50+ hours to do so.

The video gamers’ average age is going up since the beginning of the 21st century. The current average American video gamers’ age is 35, and only 29% of the gamers are under 18. In the USA, approximately, there are 164 million gamers, while worldwide this number reaches 2.5 billion. These mature people need more complex and challenging stories than just the classical hack and slash experience. 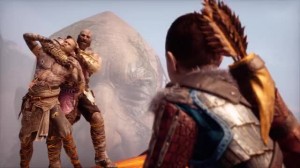 The previous pieces of God of War were great and visually astonishing. However hack and slash-y. Kratos, the main character in the games, were killing Gods in Ancient Greece alongside Titans and monsters, these settings brought alongside the high quality graphics.

Kratos used to be a vengeful. always angry god who killed his own family and the whole Greek pantheon. Modern gamers require character development and humanization, so the gamers can feel closer to the character. That Kratos can not be imagined easily as a character who is so close to our hearts, and can be sympathized with. Kratos left his birthplace Greece and moved to Scandinavia where he got married, and his second child was born, a son. In the beginning of the story, his wife passed away and her last wish was that her ashes should be scattered from the highest peak of the northern realms. Kratos and his son Atreus would like to complete Faye’s last wish. The story is surprising and jaw-dropping filled with many great stories from northern mythology. Kratos’s way is crossing the way of northern God’s just as Magni and Modi, Baldur, Freya, Thyr, the World Serpent, Mimir and many others. 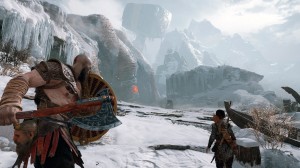 The character development is unique, and I believe it was done better than in many movies. Atreus is starting as a son who wants to prove that he is ready for the passage of right, after that phase he is a very annoying teenage boy who always says “who cares?”. Atreus does not know that his father is a God, as it said in the game he does not know his true nature. After Kratos decides to share that Atreus is a God, the boy just becomes a reckless mini God. who does not care about his acts and its consequences.

Kratos at the beginning is a very closed, emotionally illiterate. A clumsy father who wants to connect to his son. In the beginning, these two could not work together at all, anything which can go wrong, it does. However, in the last boss fight these two did the most iconic fight in the history of gaming, in such an interactive way that just pulled us into the game. 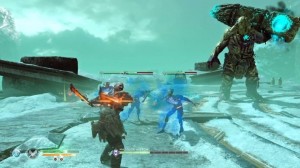 The combat system is one of the smoothest that I have ever tried. The combats are quite violent, although the gamer does not see much blood, because many times you have encounters with undead creatures, trolls, and many other kinds of enemies. Each type of enemy requires a different combat approach, and even within each type there are sub kinds, for example, Draugr, has a huge combat axe while the other has a shield with a smaller sword. Your shield can not defend the heavy attacks but you can dodge them, while the second opponent requires to break his defense, and after that you can attack it and cause damage.

During the game, you fight with Giant Trolls and I mean giant dragons, gods and many other mythical creatures which appear in the game. Atreus is moving along with us, and the only thing you can control is when he shoots his arrows towards the enemies, it is auto directed, where you move your POV the arrows are going that way and if there is an enemy that way the game is going to land those shots.

The game offers extra rewards for the gamer who is willing to spend the time unlocking interactive puzzles in the game. The interactive puzzles can be a bit tricky but not impossible. My favorite was when you have to use your axe to throw it from one angle and go around to the other side of the chamber and recall your axe so it opens the door for you. You have an axe which works similar to Marvel’s Thor’s hammer which can be recalled from a large distance if he throws it away. You earn XP which you can use to unlock abilities which are connected to your axe, shield, bare hands combat. Also, you have to pay attention to your armor built, the game has 6 main attributes (strength, runic, defense, vitality, luck, cooldown) which affects your combat style and how you deal with enemies. The build is up to you.

Side missions which do not feel as boring, must be chore but exciting extra tales which can help you better understand the game and the story. My favorite part when you’re exploring new parts of the world and just kept listening to those great tales. Sometimes I did not do anything just listened to the exciting tales, which added a huge plus to the game experience. 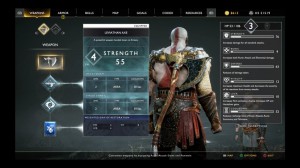 I would like to outline the brilliance of using side characters, such as the two blacksmith whose job is to upgrade your armory and provide consumables. The brilliance hides behind their unique brother relationship and how they are adding tips, stories and tales to the main game story. They would win the best supporting character in the Oscars.

God of War is ahead of its time and it is a standard setter game with the storyline, visuals, combat system, uniqueness and with its wide variety of enemies. It is official that in 2021 the sequel is going to be continued with Ragnarök.