To give or not to give to the homeless 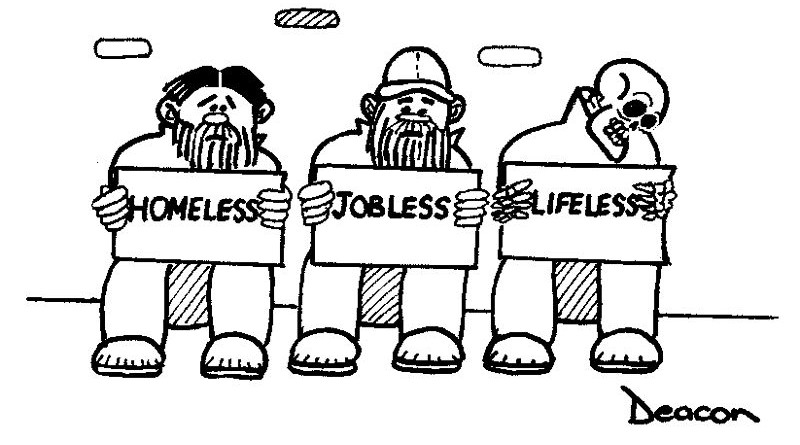 From a morality perspective the majority of us, if asked that question, would most likely say “yes.” But that can be too dependent on social acceptance and peer pressure- we don’t want to seem like self-absorbed individuals who can’t spare a dollar or the morning Starbucks coffee in order to make someone else’s day a little brighter. Meanwhile those who do say “no” are directed by that familiar voice of reason resonating from childhood by their mother or grandmother, “Don’t give them anything it’ll only go on booze or drugs. You’re better off buying them food or donating to a shelter.” This coincides with the common view that you are enabling them to take one step further down the path of self-destruction.

Deciding to give money to the homeless or not is undoubtedly an economic affair of the heart. But how much do we really know about the underground society of homeless individuals? Is it their fault they ended up on the streets? Should we give them money or is it a waste because it’ll go on alcohol or drugs? What stops you from giving to the homeless?

When I say “homeless” I am referring to those you see every day in the same spot, in the same stench, in the same condition you saw them yesterday- the one’s you recognise as truly homeless and give you no preconceptions that they’re “milking it,” “hustling you” or are one of those infamous “traveller’s”- dare I say “gypsies” ?

The case against giving money to the homeless is quite extensive in comparison to donating. From Pamela J. Fischer’s research it was concluded that over 50% of America’s homeless were said to be struggling with alcohol and drug dependency. Factors such as personal bias must be taken into account also- making that percentage potentially a lot higher. In addition according to a study by Dr. Hwang, the recipient of a Career Scientist Award from the Ontario Ministry of Health and Long-Term Care, “panhandlers” can make anywhere from $600 to $1500 a day. Within the study Dr. Hwang refers to panhandlers as “a highly visible group of street people in urban areas”.Correspondingly panhandlers usually have no means of saving their earnings and are in more tempestuous conditions to spend their money impulsively on more short-term aids rather than long-term necessities.

Ultimately resulting in the dependency of alcohol or other substances to escape their realities- in other words you’re basically flushing your money down the drain and into the self-destruction of another individual.

But it is important to consider that this hardline approach of not giving money to the homeless can be just as much of a death sentence through the potentiality of crime, poor health conditions, and hunger. Essentially I believe this possibility neutralizes the problems that come with handing over money to those on the streets. If your money contributes to their final hit, accept they would rather be dead.

In comparison the case for giving is a lot harder to support with statistics. The dilemma of not being able to control where the money is spent can only truly be combated in an altruistic sense. One of Mark Johnson’s (a rehabilitated former drug user, author and the founder of the charity User Voice) principles is: “If a person living on the streets decides to spend your money on drugs or alcohol, it’s none of your business.” Personally, I have the same approach towards this subject, yet to this day I can still recall my grandmother’s voice of reason echo over me as I hand the money over. But ultimately when it comes down to it, the majority of us have our own leisurely aids we spend unnecessary amounts of money on, so who are we to make that choice for other individuals we barely know? If we were to be in lesser similar circumstances, would the chance to escape reality be as easy to ignore as we proclaim?

The stigma surrounding how a homeless person decides to spend the money you give them will always be apparent- perhaps you are better off donating to the cheerful strangers asking for donations to more reputable organisations- yet then we are challenged to ask ourselves how much of that money is really going into the hands that need it. In any sense it can’t be emphasised enough that as the growing gap between rich and poor increases, homelessness will only become an extending possibility for many and at the end of the day the choice is all yours – to give or not to give?