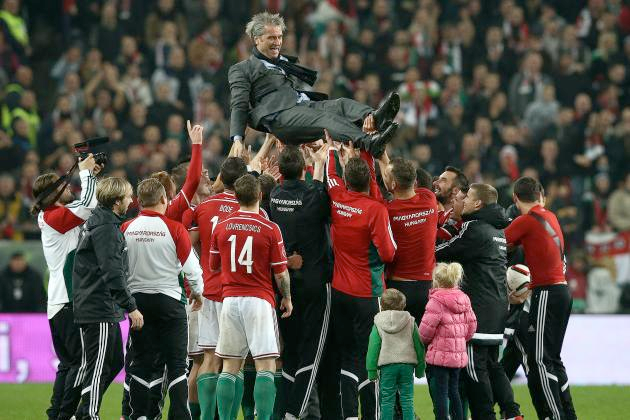 As the famous Hungarian saying goes: “itt az idő, most vagy soha” (The time has come, it’s now or never); there is no better quote than that to describe the feeling amongst the people of Hungary at the moment. The Hungarian national team has at long last finally qualified for a major tournament after being absent for more than 30 years. The mighty Magyars defeated Norway 3-1 on aggregate in the Euro 2016 Qualifying Playoffs in November, crushing the Scandinavians’ dreams of qualifying for their first major tournament in nearly as many years. Hungary’s qualification came as a big surprise to the rest of the world as Norway was declared the clear favorite to progress after the fixture was drawn. In fact, the Norwegian press and players were so cocky that they even printed out custom-made T-shirts that had “Norway Euro 2016!” written on them prior to the first leg of the matches. Furthermore, the host of the most popular TV channel, which happened to broadcast the draw live, screamed and jumped up and down with joy when it was sure Norway were to face Hungary. This naturally caused quite the uproar in Hungary, but now looking back on it, we wouldn’t have wanted it any other way!

Fast forward to December 12, and the official draw date for the Euro 2016 arrived. Having defied the odds and qualified for the tournament as major underdogs; everything from this point forward is just icing on the cake. This was the approach of the Hungarian delegation sent to participate in the Euro 2016 draw last Saturday night (December 12). Our mentality was that no matter who we get, as long as we give our best effort, we will be satisfied. When asked minutes prior to the draw if there were any teams he wanted to avoid at all costs, Hungary’s newly appointed coach Bernd Storck said: “We will be happy with whoever we get, we will give it our best shot. But yes, I would rather not face Germany, Spain and France. Those are the teams I would like to avoid if possible.” Well, Mr. Storck was granted this wish of his, as Hungary did indeed avoid all three of those heavyweights.

Instead of having to face the above mentioned teams, Hungary was drawn into a group alongside Portugal, Austria, and Iceland. At first sight this group doesn’t seem all that scary, but if one takes a closer look at the makeup of each squad, the story becomes a bit more alarming. With respect to Portugal, they were the team which most Hungarians wanted to play from “Pot 1”. While they are filled with quality players such as Pepe, Fabio Coentrao, Nani and Joao Moutinho, Portugal’s team is essentially a one man show. In other words, if we can stop that man, we will have a fighting chance. However, this is more easily said than done, as this man is none other than Cristiano Ronaldo; arguably the best player in the world. Next, we have our neighbors: our good friends Austria. The Austrian team has gone through a major generation change in the past few years and are on the rise. Personally, I am more concerned about our chances versus Austria than against Portugal. Austria not only has a few stars in the likes of David Alaba or Aleksandar Dragovic; they also have a much better balanced squad. Essentially out of the 23-25 players on the team, 85-90% of them play in the top four leagues around Europe. Lastly, we have the dark horse of the group, Iceland. Iceland is a tiny country with a limited amount of history in football, thus many ignorant fans may write them off for now. But if one looks at their performance during the qualifiers (beating the likes of the Netherlands and Turkey) and takes a look at their squad makeup; one will see they are no pushovers. Albeit, the majority of the Icelandic players don’t play in the top four leagues in Europe, they do have a few guys who are quality players. Here we mainly talk about Gylfi Sigurdsson, their playmaker who has spent the majority of his career in the Premier League. In closing, it is important to mention two small details when looking at next summer’s tournament through the eyes of Hungary. First of all, this year’s tournament is a bit different than those of years past as more teams are able to advance to the knockout round. Seeing the somewhat favorable draw, it is not unrealistic at all for Hungary to set reaching the knockout stages as their goal. However, everyone should remember that just by qualifying for the tournament Hungary has already done its job. Everything that happens next summer will only be the icing on the cake. Perhaps keeping this in mind, the Magyars will be able to play freely and who knows maybe even go a bit further than most think.