An enjoyable, ecclesiastical day out in Esztergom

On the last Saturday of September, students of McDaniel College Budapest met at the ungodly hour of 7 a.m. to catch the train to go on a trip to the picturesque city of Esztergom. Arriving at their destination, the first thing to be done was to visit the famous Esztergom Basilica; of which the full name is Primatial Basilica of the Blessed Virgin Mary Assumed Into Heaven and St. Adalbert! It’s almost as long in Hungarian: Nagyboldogasszony és Szent Adalbert prímási főszékesegyház! This epic structure is the seat of the Catholic Church in Hungary and is considered the biggest building in the country.

From what remains of Renaissance art in Hungary, Esztergom Basilica holds inside its walls the most precious example: the Bakócz Chapel which was built out of red marble by Italian artists in the 16th century. In another wing of the building, the Cathedral Treasury that exhibits luxurious pieces of jewelry and other precious liturgical objects gives the visitors another taste of the artistic legacy and keeps them breathless. One of the unique items of the collection include the so-called Cross of the Coronation Oath, a stunning late Romanesque cross on which the Hungarian kings swore their oaths during the coronation ceremony. After a tour of the rest of the basilica and a long stop on the dome’s balcony to take picture of the whole city with Slovakia on the other side of the Danube, it was time for lunch. 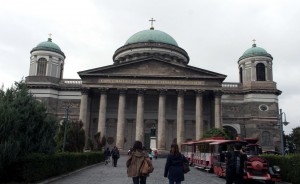 The day ended with a long stroll around the city and a coffee break. Laughs and conversations about different topics made the day even more interesting.