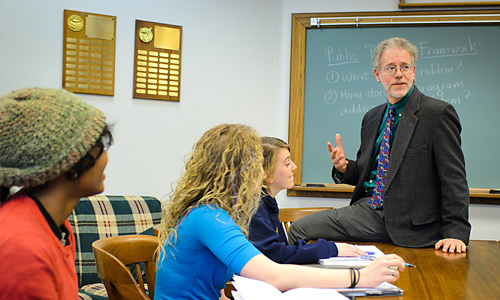 Last semester a few of us students met with Professor Jim Kunz, the new guest professor from the main campus, for a sneak preview of his courses for Spring 2013, and a 2-credit June Term that involves the building of houses in Romania.

Professor Jim Kunz arrived in Room 244 just as we had settled down in anticipation of fast-paced preview of his courses. He arrived, was briefly introduced by Dr. Adamson, and then the guest professor said hello to us with a magnetic smile as he set out to introduce his fields of specialty

“I teach social work. This means myself, and we, so called social workers help people with problems, said Prof. Kunz. “We work, one-on-one with people that have some sort of social problems. This might be to do with their health or poverty, we in these terms work with society.” He added that social workers need to know about policies, and his interests were the differences in how poverty was perceived.

At that point some of us looked at each others’ faces and thought “hmm what does the Prof. mean? If you are poor; you are poor…” He seemed to immediately notice our curiosity, smiled, then in a more academic tone noted; “by this difference in poverty perception, I mean that the way poverty is thought of in the U.S for example, depends on how much money you make, while in the U.K. and the E.U, a different approach is used by examining how connected you are with your community”. Prof. Kunz very quickly pointed out that this was to be the core content of one of his courses entitled “Global Perspectives on Poverty and Social Exclusion”.

The Guest Professor introduced his second course titled “Analyzing and Working with Social Welfare Agencies,” he said “social workers think of giving service for example through NGOs, we will examine how they deliver services, and how such NGO’s (non governmental organizations) get money.”  This class will involve “service-learning” – a large part of the course will entail working at a Horse Therapy Institute in Föt that works with kids who are autistic and or blind.  By volunteering at the Institute, students “will be able to learn how the organization cares for these children and also learn how the organization functions.”
Service-learning is also a critical component of the June Term course, “Building the Global Village” which is being undertaken in conjunction with Habitat for Humanity International’s Global Village Program.  Students will spend a few days in Budapest learning about poverty housing and then spend a week in Beius, Romania,

“working with the Habitat for Humanity, volunteering time to help people build housing, with no experience in building is necessary, you will also learn what is being done there,” he explained.

Dr. Adamson suggested that an orientation day might be good for students in regards to the June term which actually takes place in May. Professor Jim Kunz was delighted at the idea and welcomed it most heartily. He said he would also be working with McDaniel Trustee Barbara Thomas in Bratislava, on low income housing in Europe… ‘She is a part of McDaniel’ he said.

Verena Zyla, a student in the audience, asked if we could know what kind of work students would have to do as part of the construction? Measuring perhaps!! The professor replied saying “usually a large group of students is asked to do a big project at once, but it’s usually broken down and you need no expertise. What part I do not know exactly now, but I will give good feedback later on.”

Professor Kunz also discussed the growing field of social work of using animals for therapy. “It is good to work with children to break down barriers and make them feel more comfortable,” he said, adding that he is also open to questions and reachable on his email, jkunz@mcdaniel.edu,

I asked how much study of politics was to be found in his courses because I felt its inference from the titles of his courses,  Professor Kunz smiled and replied saying “a big chunk comes form how different fields look at poverty, and so the answer is from all perspectives and not just social work and politics”.

Having concluded his semester preview with us, Professor Jim Kunz closed the meeting by thanking us and the faculty members present, and we all reciprocated that we were delighted to meet him as well.

PLEASE NOTE:  THE “JUNE TERM” ORIENTATION MEETING (DISCUSSED ABOVE) WILL TAKE PLACE ON MONDAY, FEBRUARY 18th AT 2:45 IN THE AUXILIARY BUILDING ROOM C2.  IF YOU ARE INTERESTED IN THE JUNE TERM CLASS, OR WOULD LIKE TO LEARN MORE ABOUT HABITAT FOR HUMANITY, PLEASE COME TO THIS MEETING!!!