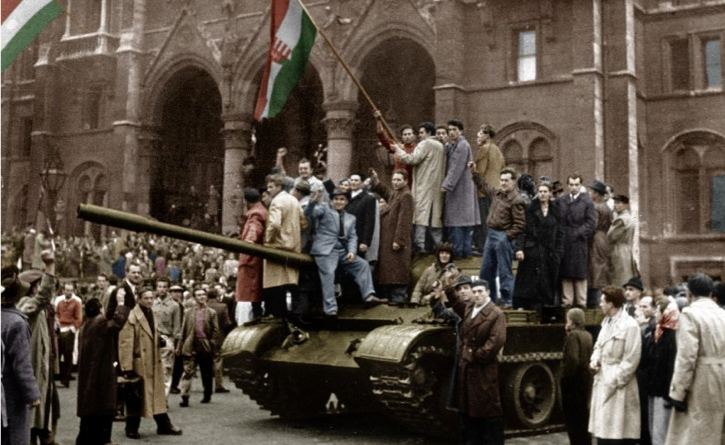 October the 23rd happened to fall on a Wednesday this year, one of the most important national holidays for those living in Hungary. Firstly, we do not have school, so it is definitely something to celebrate; secondly, it is a day of remembrance and commemoration of Hungaryâ€™s fallen revolution against the oppressive regime of the USSR. The day also celebrates the independence of Hungary, as it was declared an independent republic on the 23rd of October,1989 after the fall of the Soviets.

The 23rd day in October marks the beginning of the 1956 Revolution, starting peacefully on the streets of Budapest as a sort of demonstration. Organized by students, demanding free elections, freedom of press, complete withdrawal of the Soviet troops stationed in Hungary, as well the return of Nagy Imre, former Prime Minister who had been dismissed for â€˜too liberal thoughtsâ€™, to his former position.

The demonstration was gaining more and more members, turning a small group into a huge crowd. Responses to the demands posed arrived by 8pm, in an unscheduled radio announcement by the Hungarian Communist Party. The demands of the revolutionaries were completely turned down and dismissed. The fierce and angry (but not violent) crowd then decided it was time to broadcast their own demands while letting the whole country hear them. However, they were welcomed at the radio station with police brutality, resulting in the first death of the ensuing bloody revolution. This was the last spark the country had been waiting for, to blow up in a nationwide uprising against the system.

In spite of the barbarity of the police and the presence of Soviet tanks on the streets, the fierce revolutionaries were not frightened. Hungarian patriots risked their lives for the sake of their county, believing that it would make a change. Holding onto the belief that their death would not be in vain; instead, that they could contribute to a brighter future that the country and its people deserved.

Just five days after the outbreak of the revolution, on the 28th , a ceasefire agreement was made, and the Soviet troops began pulling out of the capital on the 30th of October just as Imre Nagy was titled Prime Minister again, and successfully formed a new government. However, the revolution wasnâ€™t over that easily. A few days after the initial successes against the Soviet Union, on November the 4th, USSR leader Nikita Khrushchev ordered extra tanks with army reinforcements into Hungary, to put a dot at the end of this sentence in history. The bloodbath just continued, as after the revolution the Soviets murdered thousands of people, including Imre Nagy, who faced a secret trial, and was executed in Budapest, 1958. Next to him, a thousand were arrested– fighters or not, it didnâ€™t matter– a several hundred were executed in cold blood, and hundreds were deported to the Soviet Union, and over 200,000 could fortunately flee outside the borders.

After the wildest waves of the revolution were completely destroyed and the country forcefully placed under its former regime, October the 23rd was considered a day of counter-revolution against the communist system, and all commemorations of the day were strictly banned.

Just after the fall of the USSR in 1989, Hungary was declared a republic on October the 23rd signifying the importance of that notorious day.

Programs on October the 23rd:

Between the 22nd - 23rd of October numerous programs are held through the whole country to commemorate the revolution.

The country-wide celebration starts in the morning with the raising of the Hungarian flag at Kossuth Square.

Most of the museums located in Budapest are free to visit on this day, just as on the 15th of March, or on the 20th August. On this notorious day in October, the gorgeous building of the Parliament can be entered free of charge (in given time interval)– including free entry to view the Holy Crown of Hungary in the Parliament building.

Before going, please check the individual â€˜national holidayâ€™ opening schedule of the museum you wish to visit.

Also, bear in mind that since itâ€™s a national holiday, shops are closed on the 23rd.