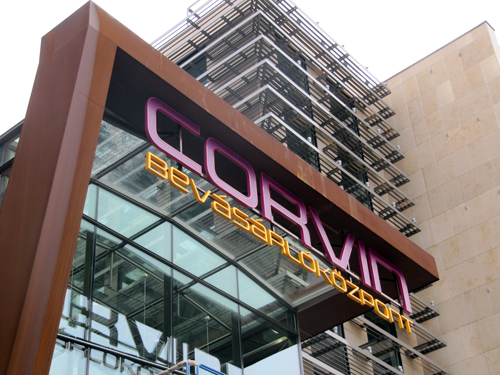 A new shopping mall opened in Budapest, on October 27, 2010. While there may seem to be so many, it is in fact the first new one to open in quite a while.

This new addition is called Corvin Shopping Mall and it is located in the 8th district behind the old Corvin movie theater, in the heart of Budapest. The shopping mall is still not at its final stage, but customers are able to shop at the various stores and buffets that are currently open.

The building was nicely renovated and is one of the most beautiful modern buildings in Budapest. Like West End, it has a green garden on the rooftops of the mall and the added bonus of a park at the back of the mall. Also like West End, it is in a very convenient spot for transportation, since the 4-6 tram and the blue metro line pass nearby.

The shopping mall contains a variety of different shops from clothes stores to hairdressers and a whole floor dedicated to food. The estimated size of the retail stores is a total of 65,000,000 square meters with 34,600 square meters for the supermarket.

As mentioned at the beginning, this shopping mall is still at its starting point. As the mall prospers more and more, there will be more shops opening in the mall; as of right now most of the more well-known outlets, like McDonald’s and Springfield, are not yet present in there but other shops replace them nicely.

All in all, the new shopping center is a transportation friendly mall and also it is in the center of the city so it is very easy to locate or find when you are in the city and also the garden on the roof is a sight to be seen in the summer time; the view from the top captures the beauty of Budapest very nicely.