Christmas continues to catch on in China

By Haisha Wang   Christmas, as one of the most important western holidays, is now becoming increasingly popular in big Chinese cities since China has been opening up to the outside world. 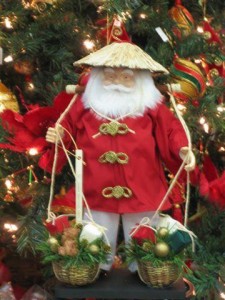 At this time of the year when Christmas is around the corner, if you wander through the streets of Shanghai, you will be able to feel the festive atmosphere everywhere: the huge beautifully decorated Christmas trees, a smiling Santa Clause or two, and attractive gift boxes inside or outside shops. Maybe unlike the way Christmas is celebrated in Western countries, people in China mostly celebrate Christmas by getting together with friends and having a lot of fun. Some people may send Christmas cards or gifts to friends. Others go to Christmas parties. Since Christmas is not an official holiday in China, people don’t have the day off. So most of the activities center on Christmas Eve. On Christmas Eve, people, especially young people, swarm into the streets and the brightly-lit shops and restaurants with their friends. Christmas is even nicknamed “the second Valentine’s Day” in China because of its popularity amongst young people. 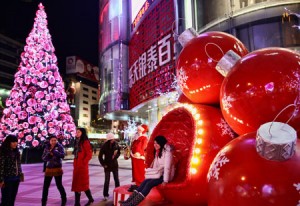 The ever-increasing popularity of Christmas in Chinese cities has been attributed to two main reasons. The first reason is that, as China is opening up more and more to the outside world, more foreign companies and businesses come to China and more people come to visit and work in China. At the same time, more Chinese are going to other countries to study, work or just for leisure. Exchanges like these help spread Western culture more extensively in China. This can also be seen as one of the results of China’s globalization. The second reason is the fast development of China’s economy, which has brought about a higher standard of living. When they are more financially secure, people can afford to celebrate more western holidays, as well as Chinese traditional holidays. As a matter of fact, Christmas has the tendency of reaching out to smaller cities in China every year. What is unique about Christmas as celebrated in China, along with some other western holidays, is that they bring new aspects to the Chinese ways of holiday celebration, such as sharing outside the family and joining a crowd for more fun. And an interesting thing is that, sometimes Chinese people get to celebrate both western and Chinese holidays at the same time. For example, since next year will be the year of the sheep according to the Chinese Zodiac, you get to see some large sheep mannequins already put up beside Christmas trees. Of course, it totally seems to make sense this year, but imagine when it comes to the year of dragon, or something else. Overall, it’s nice to see that in China western holidays exist in harmony with Chinese traditional holidays.