Chinese soft power in the Year of the Monkey

By Chelsey Chen and Maxim LeFleur

Last week marked the beginning of the Year of the Monkey in China, an important year for the Chinese government’s ‘soft power’ cultural diplomacy initiatives around the world. Despite many well-known successes in traditional ‘hard power’ economic and military programs in recent years, China has failed to live up to its vision as a global cultural competitor rivaling the European Union, Russia, and the United States.

Despite stalled progress in public diplomacy, Chinese economic projects including the recently inaugurated Asian Infrastructure Bank continue to gain momentum. As of 2016, the US$100 billion bank has signed up 57 member countries, all ready to cooperate on infrastructure projects designed to facilitate commerce and trade with the Chinese market, as reported on Nikkei. Despite the US and Japan’s refusal to participate, many other powers such as Australia, Germany, India, Saudi Arabia, South Korea, and the United Kingdom are prospective founding members.

While China successfully cemented the importance of its competitor to the World Bank politically, the nation’s related soft power and public diplomacy initiatives have yet to achieve their desired impact. For the bank to help realize China’s wide-spanning Belt and Road Initiative, in which maritime and over-land routes link China to Central Asia, the Middle East, Europe, South Asia, and Eastern Africa, the nation must rally greater public support abroad. This project represents not only a historical collaboration between China and the nations along these proposed trade corridors, but also physical links between these distant regions.

The failure to realize China’s public relations vision is not from a lack of effort. For years, the Chinese government has pushed its cultural agenda through entertainment, news, and live events through government-owned media groups. Most important in this effort is the Chinese state owned CCTV, or China Central Television, the world’s largest television broadcasting company. Launched in 1958, with an estimated current viewership of 1.2 billion, CCTV is a behemoth of public diplomacy.

One annual CCTV event overshadows all others – the CCTV Spring Festival Gala Evening. The show commemorating the arrival of the Chinese New Year is the planet’s most viewed television event, drawing an estimated 700 million plus viewers annually. The program spares no expense in human, material and financial resources, acting as the ultimate soft power showcase in its role as the largest and most influential program in China.

The inaugural Spring Festival Gala Evening was televised in 1956, and the current incarnation as the CCTV Spring Festival Gala Evening began airing in 1983. Every year, on the last evening of the Chinese lunar calendar, the program is broadcast on CCTV-4. The international channel is accessible worldwide, ensuring Chinese audiences can view it regardless of their geographical location. In recent years, the program also plays on CCTV-9, CCTV-E, CCTV-F, CNTV, CCTV-العربية and CCTV-Русский as part of the expansion to attract foreign audiences.

The main intent of the CCTV Spring Festival Gala Evening is to usher in the Chinese New Year. The show typically runs for around five hours without advertising, lasting from 8pm to roughly 1am on the next day. The Chinese government connects the majority of the country’s population through simultaneous viewing of the Gala during the final moments of the year, the midnight countdown, and the opening moments of the New Year. The show includes many types of patriotically themed performances, including singing, dancing, drama, crosstalk, short sketches, and other formats. Every performance is broadcast live, increasing the challenge for coordinators and performers, while keeping the program mysterious and surprising.

As times change, the show is not only intended to highlight Chinese classical culture, but also modern pop culture, social change, and ongoing development in China. In the last two years, the Gala began to connect with telephone apps, online games, and feature live comments from viewers on services such as WeChat, Weibo, and Zhifubao. For Chinese people, watching the CCTV Spring Festival Gala Evening is a yearly tradition. Now, the Chinese government hopes the television event will become a fixture for global audiences abroad. 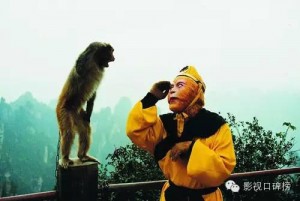 As highlighted in this year’s Gala, the Year of the Monkey provides a convenient thematic platform to attract global interest to one of China’s major pop culture releases of 2016. The monkey imagery from the evening was a strong lead-in to the film adaptation of Journey to the West. Known as one of the country’s Four Great Classical Novels, the story follows the Monkey King, Sun Wukong, on his adventurous pilgrimage to Western Lands (a fantastical India) in search of enlightenment and sacred texts. Featured in the International Business Times, the 2016 film is co-produced by Paramount and multiple Chinese partners. The movie casts the actors of the domestically famous 1980s television adaptation in a modern, high-budget motion picture. If the movie succeeds as even a modest hit abroad, it could become a cornerstone of Chinese cultural influence in 2016.

If the Chinese government can attract greater international interest in state-produced media through CCTV, and the country’s high-budget entertainment media can finally reach a significant global audience, the Year of the Monkey could be remembered for the soft power successes needed to compliment hard power projects such as the Asian Infrastructure Bank and the Belt and Road Initiative.