China’s Lantern Festival is here to light up the night

The Lantern Festival on the 15th day of the 1st lunar month (this year falling on February 22), had become a Chinese festival for people to show respect to Buddha as early as during the Western Han Dynasty (206BC – 24AD).

Buddhism flourished in China during the Western Han Dynasty. So much so in fact that the Emperor Liu Zhuang, who had heard that Buddhist monks would observe Buddha relics and would light lanterns to worship Buddha on the 15th day of the 1st lunar month, ordered his people to light lanterns in the imperial palace to show respect to Buddha on this day. Later this rite spread from the palace to everyday folk to become an important festival in China.

Back then, people used colored paper and bamboo cane to make the lanterns. Many lanterns resembled balls and people used to hang them under their eaves. Besides the hanging lanterns, girls would use colored paper to make paper flowers that could hold a candle in the middle and then they would light the candle and put this paper flower on the river to make their wish (in China they believed that if the candle was not extinguished, their wish would come true). For farmers, they would light bonfires as they believed the fire could ward off disaster. 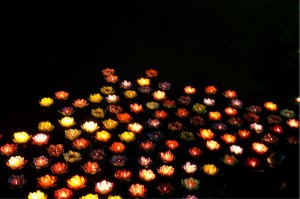 Nowadays, people still keep lighting lanterns on this night so you will therefore see different lanterns in the streets. This is because nowadays more and more people live in apartments so they cannot hang lanterns under the eaves. They do not look like traditional lanterns (like a ball), as people have combined them with different elements, for example with the monkey king and dragon. Lanterns are now not only for hanging under the eaves, but are more like decorations on the bridge, on trees and on the rivers. For children, they will buy or make small lanterns, which they can stroll with on the streets, and some people will go guessing lantern riddles, which is an essential part of the festival. The lantern’s owner will write riddles on a piece of paper and post it on the lanterns. If someone’s answer is correct, the lantern’s owner will give them a small gift. 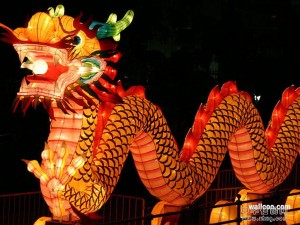 Families will have dinner together during the Lantern Festival and they should eat rice dumplings (Chinese call them Yuan Xiao or Tang Yuan), because in Yuan means reunion in Chinese, so people eat them to denote union and happiness for their families.

Even though many Chinese expats are not able to have a reunion with their families and to keep to all their traditions (such as seeing lanterns in the streets), they still eat rice dumplings during the Lantern Festival and think about their distant loved ones. 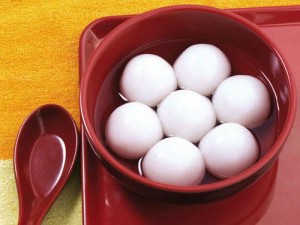