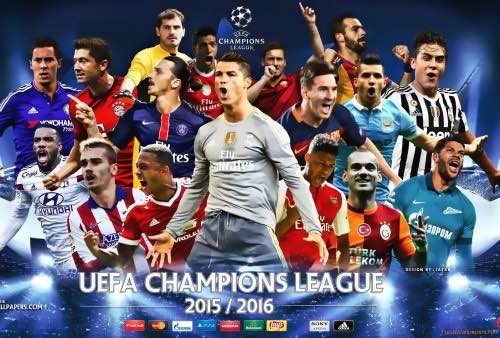 Knockout Round First Two Matches, Chelsea vs. PSG 2-1 and Real Madrid vs Roma 2-0.

The champions league first knockout stage started this past week where four matches of the first leg were played by eight teams, including the two important matches where Chelsea faced PSG and Real Madrid faced Roma. The managers now have a little more information and ideas for their second leg matches, but who has a better chance in their next match?

Chelsea lost to PSG in Paris, 2-1. Chelsea’s formation was easy to predict after the injury of Capitan John Terry and the suspension of Matic, Ivanovic who is playing as the right back took John Terry’s spot as the Capitan and one of the the center back next to Gary Cahill. On the other side PSG’s only absent player was Aurier, who was suspended by the club after the inappropriate comments he made on the club.

As in every other important match, Chelsea started the match by parking their bus in front of their keeper, even Diego Cost was marking the PSG’s players while they were defending. Zlatan was the marksman in PSG, he was playing center forward while getting supported by Di Maria and Lucas on the wings, while Cavani sat on the bench, the manager would have liked Lucas to tire the Chelsea’s defender before Cavani came on. While it took PSG around thirty minutes to score from a free kick, no body expected Mikel to score in the last seconds of the first half, although you should not forget the effect of Costa on creating the chance for Mikel.

By the middle of the second half it was PSG who took control and create chances where they made Courtois come up with a couple of good saves against Zlatan and Di Maria, but as planned Cavani came in for Lucas. In a couple of minutes, he scored the winning and well deserved goal for PSG. I do expect a more attacking match by Chelsea in London as they can survive and eliminate PSG even if they win by 1-0.

On Wednesday night Real Madrid took a trip to Roma to play in Stadio Olympico, where Zidane made his debut in Champions league as a manager. On the other side, Roma also had hired Spalletti to bring the team back in form after a not very successful season in Serie A. Real Madrid’s record against Italian team were not very successful either, but Roma’s form could not put too much stress inside Madrid players. Roma started to play very defensively and were attacking only with three players. The match stayed scoreless until the 70th minutes when finally Ronaldo did what he does best and scored the first goal. Still Roma was missing a certain somebody who could be a leader and give order to the messy team. Right after Jese scored the second goal for Madrid, the legend stepped in. Of course the 38 years old Totti could not play the whole 90 minutes, but he could have join the match much much earlier In the end Roma lost 2-0.

In the second round I would expect a fine and attacking match by Chelsea but for Roma I do not see a redemption even if Totti becomes 25 years old and plays the whole 90 minute match.