Champions League final preview: the clash of the Madrid titans 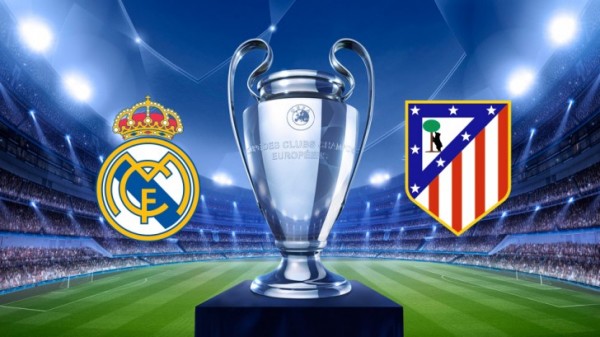 We are now finally in the final stage of this year’s Champions League and the two giant clubs from Madrid will once again do battle for the trophy. It was two years ago in Lisbon where Real beat Atletico after extra time with Atletico effectively champions until the 90+3 minute when Real defender Sergio Ramos headed the equalizer. Real Madrid now has its legendary player Zidane as their manager while his opposite number Diego Simeone is still looking for revenge for their previous meeting in the CL final.

Atletico surprised Bayern in the first match of their semi-final, with Saul Niguez scoring one of the greatest solo goals whereby he highlighted Bayern’s problem with in their defense: Bayern focus on intercepting passes but individual efforts can cause them serious trouble as seen in their last 16 meeting with Juventus. Atletico defended perfectly throughout.

As important as both matches were, none of the teams played riskily. Real Madrid scored only once in both matches as they faced a defensive Manchester City; the match facts show equal possession but more chances created by the giant Spanish side.

We will now see the clash between Simeone and Zidane as both managers have already been in this stage of Champions League – Zidane as player in 2002 and Simeone in 2014 as manager. Simeone still remembers the 2014 final match where they were the champions until injury time and Sergio Ramos scored with the very last chance and then Real totally dominated the extra time and beat their long time rivals by scoring three more times. Simeone wants to prove that he has learned from his mistakes and can also win the Champions league for the first time. Zidane has just stated his professional career as a manager by taking Rafael Benitez’s spot this spring and has already had already shown that his team is ready for big matches. The Real side presses from wherever it loses possession into the middle of the pitch where Casemiero is ready to intercept and Ramos is ready to tackle. Atletico also have Godin as their captain in their defensive line, although he missed the first match against Bayern but has been a special contributor to the team as a veteran. Both sides are good at defending usually because they faces great attackers such as Barcelona and as the top three teams from Spanish league have great strikers. Comparing names and prices, there are a handful of teams that can match up with Real side of Madrid, but Atletico have beaten the other two super candidates for the current season of Champions league.

Where Zidane had the opportunity to face easier opponents, Atletico eliminated giants such as Bayern Munich and Barcelona. Real faced teams such as Roma, Wolfsburg and Manchester City, although these teams made it to the knockout stage but they were not as much treat as Bayern or Barcelona. Atletico have arrived through a longer and harder route than their home rival, they have shown that they deserve to be considered a giant threat in Europe. Their strength is in their defensive setup by using the three great veteran Godin, Felipe Luis and Juanfran. Their innovation will come from Koke in the middle of the playground. Griezman will be paired with Fernando Torres in their attacking line where Torres represents the experience and prejudice of the old Atletico and Griezman is the new hope and blood of Simeone’s side.
Both teams have a few changes since two years ago both in formation and players. Atletico is playing with two strikers instead of one – it is now Torres and Griezman where Diego Costa was playing two years ago. Di Maria is missing from Real of two years ago, havingjoined Manchester United and then PSG. He was replaced by Kroos who joined Real after they won the championship and the veteran Xabi Alonso has been replaced by Casemiero.

Atletico have lost Courtois but since then they found another young and smart goalkeeper as Oblack. They lost Costa to Chelsea who was their best goalscorer two years ago but also played for only two minutes in the final match. He was joined by David Villa who was not in his best form either. Nowadays Griezman and the returning legend Torres has made the Atletico stronger than what it was.

Real has been the land of Ronaldo for the last seven years; both Ronaldo and Messi have won all of Fifa’s Ballon d’Ors in the last nine years and only this year there was a Suarez that scored more than Messi and Ronaldo and won the Golden Boots. Real Madrid have been known as the wealthiest football club in the world and they are also known for their high spending on the signing of the new players. They paid close to 200 million Euros for the signing of Gareth Bale and Ronaldo, who are known as the two most expensive transfers in the whole world. Zidane himself had the record for the most expensive transfer until 2009 and was the captain of the champions in 2002.

The final is being contested between two clubs from Madrid for the second time in the last three seasons while Spanish teams have won four times in the last five seasons. This year will be an opportunity for both teams to win a trophy and as both know everything about their rivals – we should witness an amazing clash. I would expect Real Madrid to be on the attack since the beginning and provide chances to score the first goal as they know Atletico will defend with all the players and attack with only half of its players. While the Real side will have more balance, the ‘BBC’ does the attacking for the most part while getting supported by Toni Kroos and Luca Modric, on the sides Marcelo and Carvajal will intercept the wingers and either pass to the midfielders or create chances for the BBC. Both goalkeepers play in the final match for the first time and their performance can decide the outcome.