Dear Reader. When you get home, look around you. You will probably see switches that turn the lights on, a fridge that contains food, radiators that generate heat, windows and walls that are decorated to make your ”place” a Home. On your desk you most definitely have a computer where you do your homework and a comfy bed where you can lay down after a tiring day.

Now, imagine this: when you get home, you notice that you cannot switch on the lights: there is no electricity. Your fridge, therefore, cannot conserve food: you are either lucky and it’s winter (you can put food out on the windowsill), or you are unlucky and it is hot outside (you can only buy food that will not decompose). You also see that some of your windows have been broken, and the walls have cracks that get bigger everyday. Your computer has disappeared; but even if you had it, it would not work: there is no electricity.

There are many families and people throughout the world who live in similar circumstances and we often have no idea what they went through to get to their current position or what they are currently going through. The aim of this article is to bring awareness to all of us who are privileged enough to think and help those in need.

Adel Lang was put into state custody when she was a small child; her father died young and her mother did not have the capacities to take care of her. She finished primary school but could not go to secondary school; she had to get a job to earn money. To do this, she needed to have some kind of a qualification: she became a social worker. She met her current husband while taking the course, he was working as an agricultural mechanic in Hogyesz. They fell in love, married and moved to Jaszkarajeno to start a life together.

Adel got pregnant soon after that and had their first son, Balazs. A year later their second son, Bence was born. She stayed at home to take care of the children, her husband worked and everything was looking up. In 2006, however, things started to go downhill. When she had her third son, Balint, she was diagnosed with a tumour and the doctors said that she had all of her three children with a tumour growing inside her abdomen. She was not operated on, however: she needed to travel to Budapest for examinations that monitored the tumour and which would have concluded whether it is malignant or not. Despite this, she could not travel to Budapest for these examinations: she had three children at home, one of them a baby, and only her husband’s income that could not cover travelling and medical expenses. 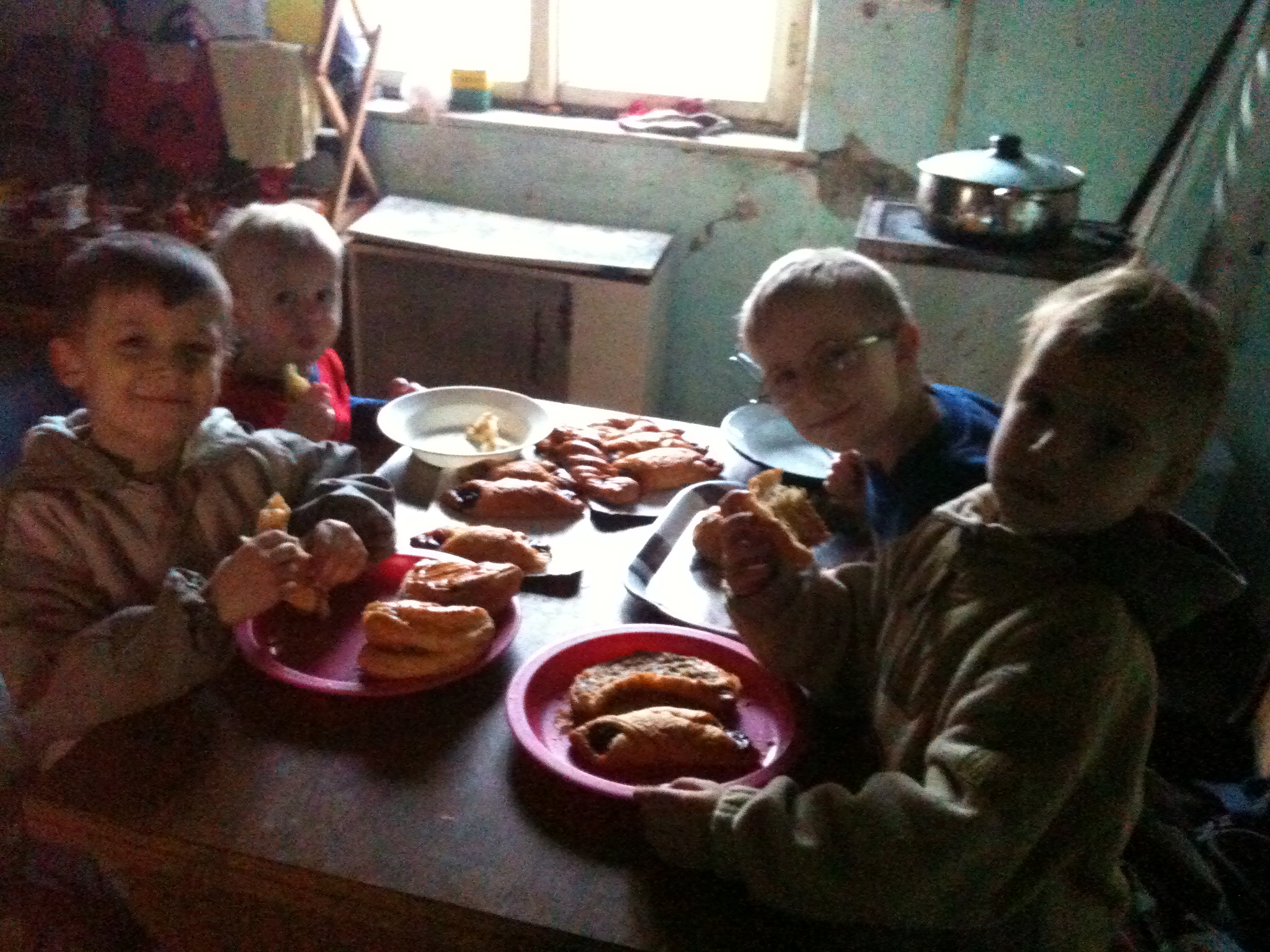 Life went on: Adel took care of her three children, her husband kept working and in 2008 she got pregnant with her smallest, Benjamin. This same year her husband was laid off and became unemployed. When Benjamin was born in 2009, the doctors said that she was to be operated on immediately: the tumour she was diagnosed with was lymphoma. She had the surgery in October, while her husband was at home taking care of four boys, one of them only a couple of months old. They could not visit Adel; they had no money to pay for a train ticket, so Adel had to go through the surgery a recovery period alone, without her family.

Adel does not have to take medications at the moment, but she has to be closely monitored to make sure the lymphoma has not returned. Her husband cannot find a job, and this year inland waters have destroyed their home: the walls have cracked, the windows have broken under the pressure of the sagging house. They have nowhere to go and have no money to rebuild the damage done by Mother Nature. They have no money to pay the electric bills and gas, so the electric and gas company have revoked their services: Adel and her family has no gas and electricity at the present. The only heating appliance is a stove that is set in the small living room (this is also where the parents sleep on a one-person bed). The ante-room cannot be used: the walls are covered with mould. The biggest room in the house is the room of the children: this room has the best beds in the house: each child has an own one-person bed (while the parents sleep in a one-person bed).

Six of them live from an income of HUF 125,000: this is the amount of the child care fee, the dole and the house subsidy. If we subtract the loans and other expenses (children’s school fees etc.) the amount that is left for a months’ food supply in HUF 63,000. If we divide that by an average of 30 (days in a month), the result is HUF 2100 per day. This amount is incredibly small for a family of six, with four developing boys. One important thing has to be stated here: Adel and her husband are obviously undernourished, whilst their children are all in good shape: it becomes evident that they eat less so that their boys can eat more. They are helped by Adel’s mother-in-law: she sometimes gives them eggs and poultry. They get clothes from the village and the local shop owner lets them buy food for credit when they run out of money. 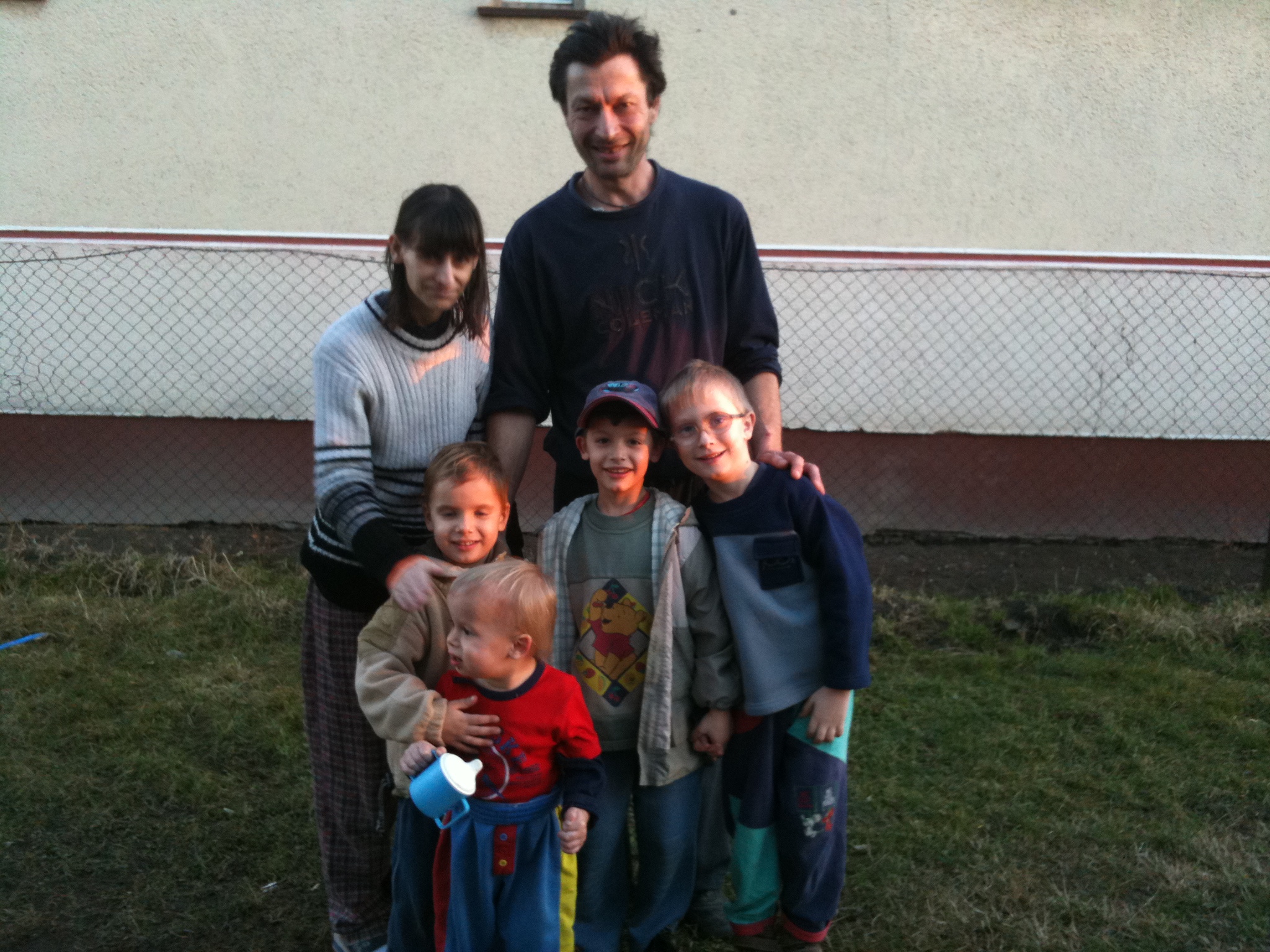 Everyday they take their biggest son, Balazs (seven years old) to school and they help him with his homework. He is a good student, too: just recently he wrote a maths exam that was a 100%. The two smaller boys, Bence (six years old) and Balint (four years old) go to Kindergarten, and the smallest, Benjamin (who is two years old,) is at home with one of his parents. Adel pays attention to the intellectual development of her children: when she gets the child care fee she buys discounted children’s books from Kindergarten from which she reads to the smaller ones.

It becomes explicit that although they have very few to give, Adel and her husband, Balazs give everything to their children without thinking. Unfortunately, their lives are not on the verge of improvement: Balazs cannot find a job, and in a year Adel’s child care fee (HUF 89,000) will be erased. Their income will drop so much that it will be questionable that they can put food on the table each day for their children. The house’s condition is going to be worse until it becomes unfit to live in.

Dear Reader. When you get home, please sit down and pose yourself the following question: “What can I do to help?” And when you have the answer, write an e-mail to the Messenger. Here is a closing quote to ponder about: “If you light a lamp for somebody, it will also brighten your path.” (Buddhist saying)